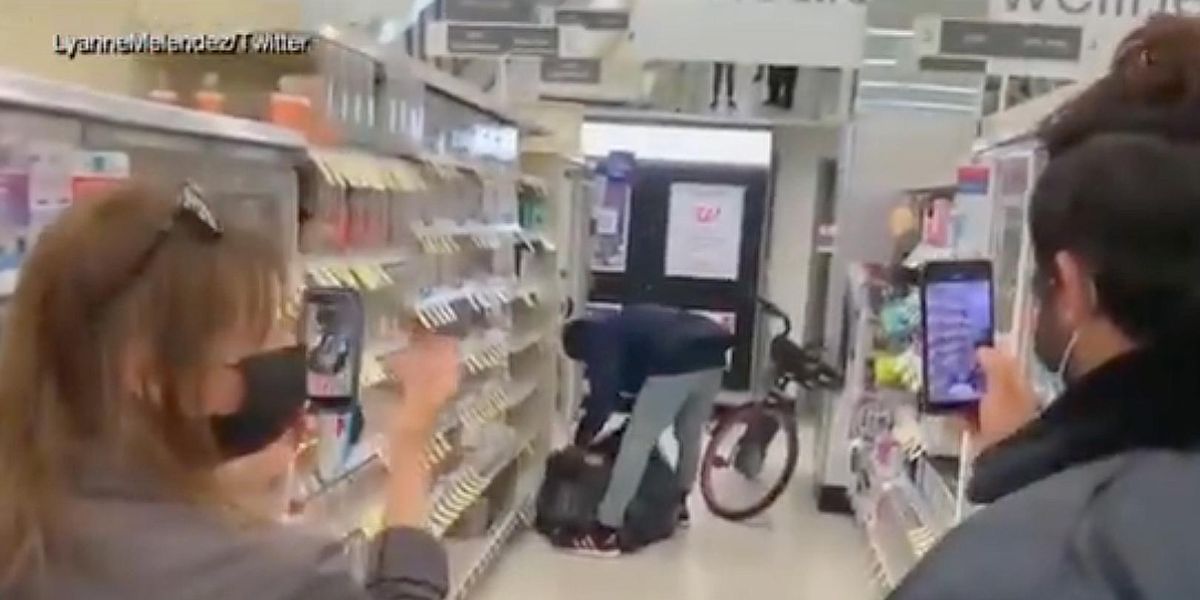 Tony Dokoupil, co-host of “CBS This Morning,” appeared to defend a man who made headlines this week after
brazenly shoplifting from a San Francisco-area Walgreens.

Footage of the incident went viral Tuesday, showing an unidentified male on a bicycle filling a trash bag with what appeared to be hair products.

Two people — including a store security guard — filmed the suspect while he took his time placing items in the sack and watched him as he biked down the aisle and out of the store.

This just happened at the @Walgreens on Gough & Fell Streets in San Francisco. #NoConsequences @chesaboudin https://t.co/uSbnTQQk4J

Dokoupil and others discussed the incident Wednesday morning on the daytime TV show.

After the clip aired, Dokoupil began, “So, crime is never justified of course.”

Co-host Anthony Mason added, “I will say that I think they could have made a little better effort to stop that bicycle. I mean, you could have disrupted that bike.”

Dokoupil added, “Well, I mean, I don’t know. You don’t need to be a hero over some toothbrushes or whatever it is. … That reads also as an act of desperation. I mean, you’re not getting rich off what you take from a Walgreens, you’re getting probably something you need.”

Co-host Vlad Duthiers interjected, “I mean, a bagful? They looked like hair products … which are valuable, and he’s filling his bag full of them.”

Co-host Adriana Diaz pointed out that the items in the bag were, indeed, hair products and not a necessity as toothbrushes or over the counter medication might be.

CBS’s @TonyDokoupil excuses massive shoplifting from Walgreens in San Francisco: “That reads also as an act of desp… https://t.co/6T3ir2lvBw

Anything else to know?

Lyanne Melendez, a
KGO-TV reporter who saw the suspect shoving merchandise into the trash bag, told her station that the suspect — who remains unnamed at the time of this reporting — “sort of ran into me with his bicycle” on his way out of the store.

“It’s hard for me as a journalist to say ‘I won’t be involved, I can’t get involved,’ I have to be sort of neutral, but this is also my city,” Melendez added. “I live in this city, and I see this constantly. Not only Walgreens, but cars, and my garage … has been broken into twice.”

She also pointed out that such crimes are becoming commonplace across the city.

“At what point do we say, ‘Enough is enough, we want our city back?'” Melendez asked.

On Wednesday, San Francisco Police Lt. Tracy McCray told
Fox News that she has gotten “used to” shoplifters taking what they want in stores across the cities without facing consequences.

“What happened in that Walgreens has been going on in that city for quite a while,” McCray said. “I’m used to it. I mean, we can have a greatest hits compilation of people just walking in and cleaning out the store shelves and security guards, the people who work there, just standing by helplessly because they can’t do anything.”

All fingers, however, seem to point to District Attorney Chesa Boudin as the cause of the behavior.

“This brazen criminal behavior is endured every single day by San Franciscans and it is the direct result of District Attorney Chesa Boudin and his enablers’ criminals-first agenda,” Montoya said.

McCray agreed, and said that Boudin’s agenda is destroying the city because criminals are not being prosecuted for “any crimes as a felony or commercial burglary,” and said that such theft cases “get slapped down to a misdemeanor.”

“Not enough cops out. You try to put a cop at every corner, which is unrealistic,” McCray added.”If you steal below $950, you get a citation and you just get to walk away and if you don’t show up to court, guess what, maybe you get a bench warrant or maybe they even toss that before it even gets to that point. Anybody can come in and do whatever they want.”

House Democrats Vote for Unlimited Taxpayer Funding of Abortion for Medicaid Recipients
WHOA: DeSantis Just Put Some MAJOR Teeth in His Executive Order on School Masking
From the ‘Secret War’ Against Communism to Olympic Gold: Sunisa Lee is a Hmong American Champion
The Dumbest Well-Read Man in America Wants to Pummel You Into Submission on Vaccines
Here’s Why Republicans Have Lost Confidence in ‘Science’