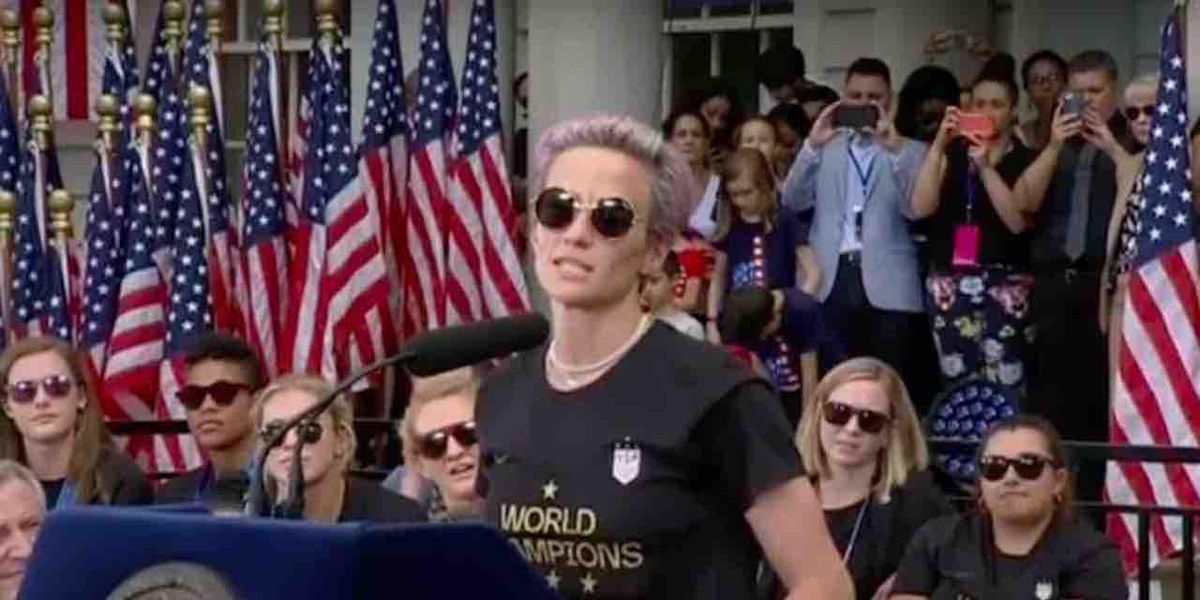 Ultra-woke soccer star Megan Rapinoe — who once gave a speech saying, “This is my charge to everyone: We have to be better …” and has virtue-signaled around the globe for progressive causes such as lack of diversity and the evils of white supremacy and former President Donald Trump — actually may be in trouble with cancel culture.

Yup, right after she was chosen as one of seven “women famous for their achievements” who will replace Victoria’s Secret supermodel angels, Rapinoe now has a problematic old tweet to deal with.

And in it she stereotypes Asians.

Her tweet from 2011 tells another individual that “u look asian with those closed eyes!”

According to the Sports Room, the account Rapinoe tagged in the tweet — @tasha_kai00, which no longer exists — belonged to former professional soccer player Natasha Kai, who the outlet said is of Hawaiian, Chinese, Filipino, and Caucasian heritage.

As of late Thursday afternoon, Rapinoe does not appear to have explained the nature of the tweet to her 923,000-plus Twitter followers. And the tweet itself still was active as of 4:30 p.m.

Given that folks far and wide have been canceled into oblivion for uttering such stereotypical statements, one might guess that Rapinoe could have some cleaning up and ‘fessing up to do if she is to survive this. But then again, Rapinoe — who came into prominence after kneeling for the national anthem a la Colin Kaepernick — is a powerful woman with untold numbers of fans and admirers, and she might simply choose to ignore the whole thing.

The tweet is newly resurfaced, so reaction is still pretty fresh, but the tweet is picking up steam — and so are the comments about it. Here’s a sampling:

Oh, and here’s that speech noted previously in which Rapinoe tells her listeners, “We have to be better”:

Like Old Soldiers, Pandemic Relief Programs Never Die. They Just Fade Away
Doocy Gets Help in Pressing WH on Covid at the Border, Lockdowns, and Travel Bans
The Fringe with Megan Fox, Episode 66: The World is Run by Narcissistic Psycopaths with Professor Sam Vaknin
FDA just ordered covid vaccine manufacturers to use more children for medical experiments and spike protein jabs
Democrats for Life Blasts House Democrats for Voting to Kill Hyde Amendment