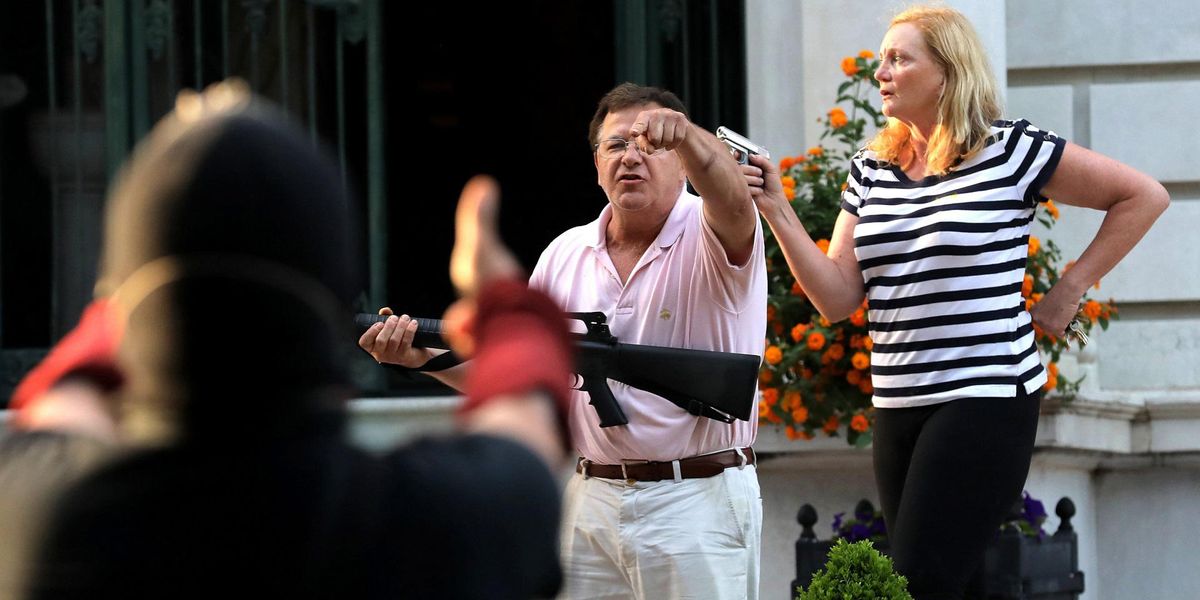 The St. Louis couple who became famous last year for displaying guns at protesters trespassing on their property have agreed to plead guilty to misdemeanor crimes and to give up the firearms they brandished in the incident.

Mark and Patricia McCloskey, both attorneys, had originally been charged with felonies.

The couple both originally faced felony charges of unlawful use of a weapon and tampering with physical evidence.

As part of the deal, the McCloskeys agreed to allow their guns held in the incident to be turned over to the state and destroyed. Their attorney had requested that the couple be able to auction the firearms off for a charity.

Mark McCloskey told Fox News following the deal, “The good news is we’re not in front of charges now, so I don’t have any problem getting myself another AR.”

Mr. McCloskey, who is currently running for U.S. Senate as a Republican, told the outlet:

They dropped all the weapons charges and they charged me with the lowest level of misdemeanor, which is something called assault four, which alleges that I purposely placed at least one other person in apprehension of immediate physical injury. I said, “Well, I guess I did. That was all point of the guns.”

“It’s the value of the Second Amendment,” he added. “It’s kind of humorous for me at any rate, the charge they finally settled on for me, because it’s exactly what I did do. That’s the whole point of the Second Amendment. We stood out there with guns, and that placed them in imminent fear of physical injury, and they back off.”

The McCloskeys confronted rioters outside their home last June, standing guard with weapons after the activists broke down the fence to their private neighborhood purportedly en route to the mayor’s house.

The couple, who said the rioters physically threatened them, became a symbol of defiance against the violence that emerged out of several 2020 protests following the death of George Floyd.

St. Louis Circuit Attorney Kim Gardner originally charged the couple with the felonies, but was removed from the case after she exploited their prosecution in fundraising emails.

The nine protesters arrested and charged with trespassing on the McCloskeys’ property were not prosecuted.