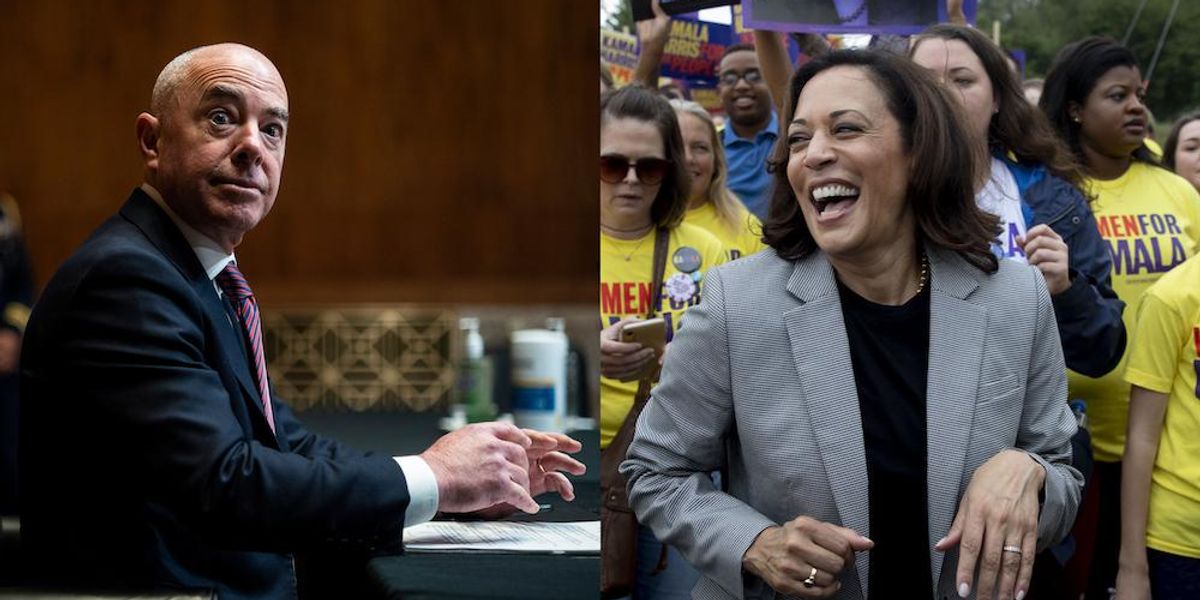 Homeland Security Secretary Alejandro Mayorkas went after at least one Republican congressman this week for being “unfair and disrespectful” toward Vice President Kamala Harris for daring to suggest that she had laughed off questions about visiting the U.S.-Mexico border, going so far as to claim that such reports were “absolutely, unequivocally untrue.”

Harris’ awkward and uncomfortable
cackle-tinged responses to uncomfortable questions have long been a source of criticism, even before she was President Joe Biden’s No. 2.

Most recently, Harris’ critics have been on her case for laughing inappropriately at questions about what is probably the biggest assignment Biden has given — and may ever give — her: Handling the border crisis that has seen hundreds of thousands of migrants swarming into the southern United States.

For example, in March, Harris was
condemned by critics for laughing off a question about visiting the border. “Not today,” she quipped before laughing. “But I have before, and I’m sure I will again.”

And on June 7, Harris got
dinged for laughing at NBC anchor Lester Holt’s question about visiting the border as she was conducting her first foreign trip as vice president — a trip designed to talk to the presidents of Guatemala and Mexico about the border crisis.

After Holt pressed her multiple times about whether a border visit would ever happen, Harris tried to claim that “we’ve been to the border.”

Holt, unmoved, pointed out, that
she had not been to the border.

“And I haven’t been to Europe!” Harris exclaimed, laughing. “And I mean — I don’t understand the point that you’re making.”

That exchange led to a CNN
report that the White House was “perplexed” and worried over Harris’ bungled answers.

Just a few days later, Harris again
faced the border question from a Univision reporter who seemed to interrupt her for an answer on when she would visit. The vice president responded curtly, “I’m not finished,” and then smiled and offered her signature giggle.

What did Mayorkas say?

But Republican members of Congress discovered this week, that one should not dare ask Secretary Mayorkas about the VP’s habit of laughing off important questions. Anyone who does risks being labeled “unfair and disrespectful.”

The secretary even went so far as to assert that reports of Harris’ laughing of the border question are “absolutely, unequivocally untrue,” the New York Post
pointed out.

Rep. Ralph Norman (R-S.C.) asked Mayorkas about Harris’ behavior during a House Homeland Security budget hearing Thursday, saying that, like going to the doctor, the vice president would benefit from an in-person visit to the border.

“Why, then, would the leader of this country and the vice president not want to go physically to look at the border, talk to the Border Patrol agents?” Norman asked. “If you had a doctor that laughed at you, as the vice president did when asked to come to the border, can you comment on that? Does that make sense to you?”

Mayorkas bristled in response, answering, “I consider that question to be quite unfair and disrespectful, and let me be very clear, the president and the vice president have requested and directed me to visit the border, which I have done on multiple occasions.”

Norman, however, wasn’t finished. He pressed the secretary, telling him: “You made the statement that my question was unfair. I’m making the statement that your comments are just words and they’re very unfair. I asked you a simple question, and I would like for you just to answer simply: Does it make sense for the leaders of the free world to go to talk to and see what’s going on at the border?”

Mayorkas answered by insisting that when Harris was the attorney general of California years ago she visited the border then and is “quite familiar with the situation.”

“But she’s laughing at it,” Norman replied.

The DHS chief claimed that was fake news: “That is absolutely, unequivocally untrue.”

Even reporters outside the U.S. have recognized Harris’ habit.

In a
clip titled, “Whenever Kamala Harris is stuck for an answer, ‘she just laughs,'” Australia’s Sky News host Chris Kenny pointed out what Secretary Mayorkas is apparently unable to see.

BREAKING: FOURTH DC Metro Police Officer Who Responded to January 6 Capitol Protest Dies by Suicide
‘The Chi:’ ‘People of Chicago Don’t Need Policing,’ Reality: 50 Shot This Weekend
The Fringe with Megan Fox, Episode 66: The World is Run by Narcissistic Psycopaths with Professor Sam Vaknin
Man tries to get past couple blocking escalator at Brooklyn train station — but the couple wouldn’t let him through. Then he’s stabbed in stomach amid argument.
Ron DeSantis Is My Hero—and I Want to Move to Florida