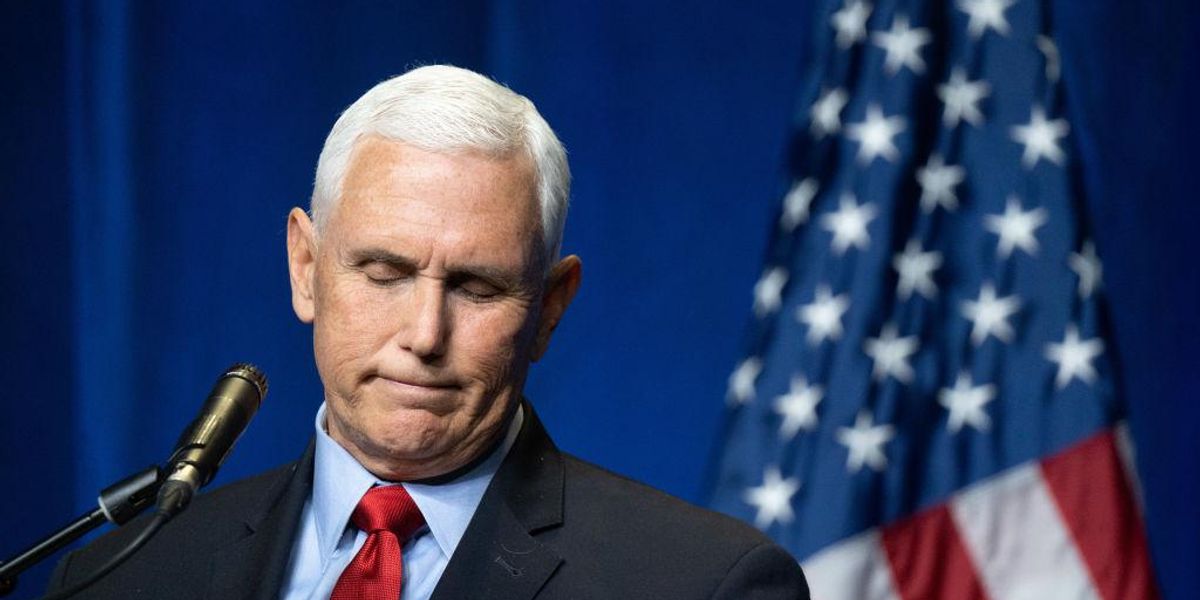 Former Vice President Mike Pence was greeted Friday with boos and shouts of “traitor!” as he began an address to a group of social conservative activists in Kissimmee, Florida.

Pence talked over the boos, which came from a minority of the audience at a conference hosted by the Faith and Freedom Coalition. There were also loud cheers and applause when he began his speech and when he delivered his signature line: “I’m a Christian, a conservative, and a Republican, in that order.”

Pence gets drowned out by hecklers at the Faith & Freedom Coalition summit, some of whom appear to be chanting “tra… https://t.co/Exan1ojWxQ

According to the Tampa Bay Times, none of the other speakers were heckled by the crowd, which consisted of hundreds of the Republican Party’s activist evangelical voters. But dozens of attendees left the room as Pence approached the podium to speak. The hecklers were quickly removed from the audience by security.

The accusation of “traitor” hurled at Pence is a reference to the former vice president’s refusal to obey former President Donald Trump’s demands to unconstitutionally block the certification of the 2020 presidential election results for President Joe Biden as he presided over a joint session of Congress.

Trump had pressured Pence to discount certain Electoral College votes from states where he contested the election results, claiming widespread fraud had rigged the election for Biden. Pence had refused to do so. In a statement to Congress, the former vice president explained that he did not have the constitutional authority to “determine which electoral votes should be counted and which should not.”

On Jan. 6, after it became clear that Pence would not stop the certification of the election results for Biden, a mob of President Donald Trump’s supporters marched on the U.S. Capitol building and then trespassed inside in an attempt to interrupt the joint session of Congress. Violence broke out, and several Capitol Police officers were assaulted and severely injured by rioters who ransacked government offices and stole government property. One of the Trump supporters, Ashli Babbitt, was shot to death by a USCP officer who remains unidentified.

Some of the rioters made calls to “hang Mike Pence” for betraying Trump.

After the hecklers were removed from the Faith & Freedom Coalition event, Pence finished his speech, praising the Trump administration’s accomplishments over the previous four years including funding the development of several COVID-19 vaccines and protecting religious liberty. He strongly criticized the Biden administration on several points, claiming Biden is insufficiently supporting Israel and weak on the immigration issue.

Pence is widely assumed to have presidential ambitions in 2024, should Trump decide against running again. Though a significant portion of Trump’s supporters regard Pence with hostility after the events on Jan. 6, a poll conducted in March that asked Republican voters who they would support in 2024 if Trump does not run had Pence leading the prospective GOP field with 19% support, followed by Florida Gov. Ron DeSantis at 17%.

Bill O’Reilly predicts that this is what DOOMS Biden’s reelection chances
CDC confesses: Vaccines are failing, the vaxxed can be super-spreaders, demands return to mask mandates for everyone, including the vaxxed
CDC admits that “fully vaccinated” Americans are super-spreaders carrying deadly variants and high viral loads
Stelter Drives Smear-Wagon Into the Ditch, Compares Trump ‘Cult’ to JONESTOWN
Man, 36, who hid in girl’s bedroom closet for more than a month and sexually abused her when parents left, gets 15 years in prison