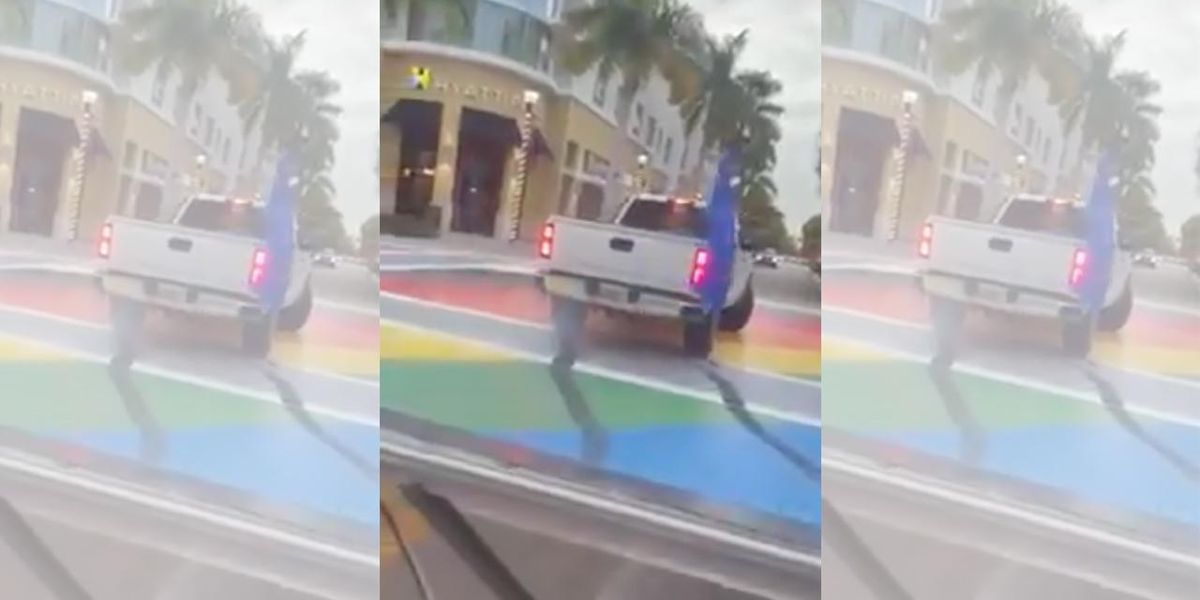 A Florida man is facing harsh felony charges after he allegedly did a burnout over an intersection painted with rainbow colors in celebration of LGBT Pride Month.

While participating in a birthday celebration for former President Donald Trump last Monday, 20-year-old Alexander Jerich allegedly did a burnout with his truck on a newly painted rainbow street, WPTV-TV reported.

Video of the incident shows Jerich driving a white Chevy truck doing a burnout across the painted street. There is a blue “Trump flag” flying on the back of his truck.

According to Jerich’s arrest report, a witness came forward on Wednesday and said he had attended the Trump birthday rally on Monday evening. The witness said he was two vehicles ahead of Jerich’s truck, and he heard someone shout to Jerich, “tear up that gay intersection.” The witness added that Jerich had a blue “Trump flag” leaning off the tailgate of his Chevy.

Jerich turned himself into police on Thursday, and he was booked in the Palm Beach County jail.

Police charged Jerich with criminal mischief over $1,000, reckless driving, and evidence of prejudice, which elevates the crime to a third-degree felony, WPTV reported.

According to the Miami Herald, the LGBT mural “was approved in December 2020 by city officials at a cost of $16,720… It was dedicated to the 49 lives lost in the Pulse nightclub shootings five years ago. The street painting, which covers the entire intersection, took several workers four days to complete.”

“BUSTED AND JAILED! Thank you Delray Beach Police Department for arresting Alexander Jerich and charging him with criminal mischief with evidence of prejudice (and reckless driving),” the group wrote on Facebook.

Rand Hoch, president of the PBCHRC added in a statement, “PBCHRC has requested the charges include defacing a memorial — a recently enacted law which would require this crime to be treated as a felony. If convicted of this offense, the perpetrator would be responsible for reimbursing the City of Delray Beach for the cost of repairing the damages in addition to the severe penalties for committing a felony.”

PIVOT! WH Reporters Join Fear-Mongering Campaign to Bring Back Covid Restrictions
Student loan forgiveness isn’t fair, and President Biden can’t do it on his own either, says … Nancy Pelosi?
Nets Hide Massive Group of Illegals Apprehended at Border, Over 1,000
Doocy Calls Out the Left’s Covid Double Standards on the Border, Obama Throwing Party
Against Recall Elections