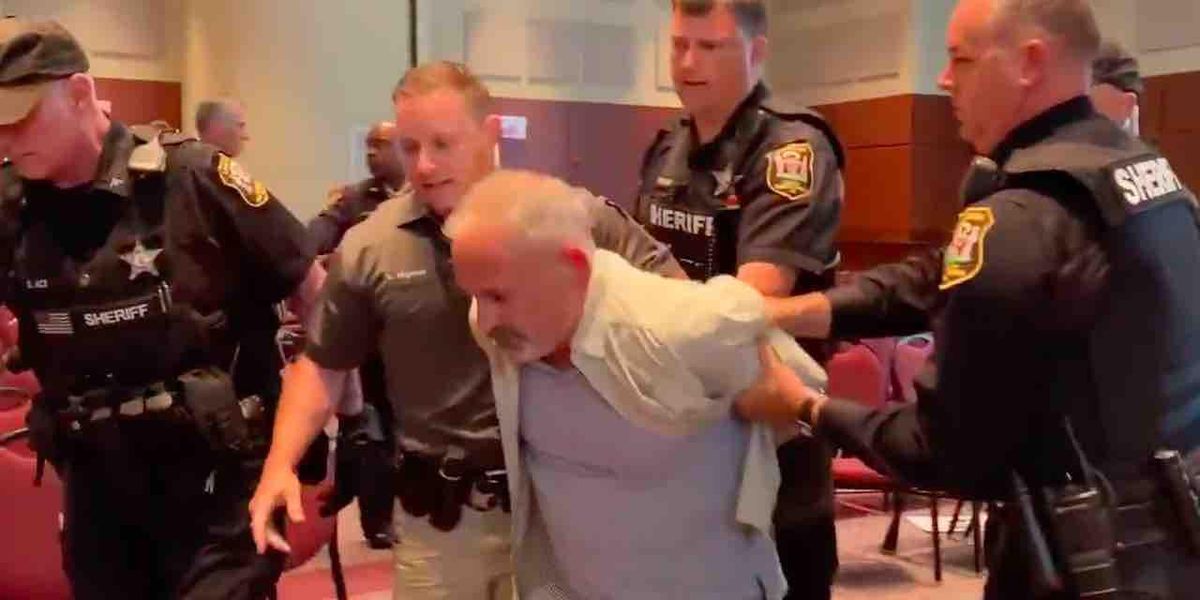 A taxpayer who was arrested for refusing to leave a
raucous Loudoun County, Virginia, school board meeting Tuesday after an “unlawful assembly” was declared told Fox News’ Tucker Carlson that “First Amendment rights” were “trampled on” by the powers that be.

“I was in a place … where free speech has to happen,” John Tigges told Carlson in a Wednesday interview. “If you want to redress your grievances about a school board, there’s no other place you can do it than in a school board meeting.”

The district and its board — as well as parents of students — have made numerous national headlines recently over the
handling of the COVID-19 pandemic, the teaching of critical race theory, “pornographic” content in assigned books, and LGBTQ issues. Furthermore, an elementary school teacher — a Christian — was suspended for voicing opposition to the district’s transgender-affirming policies and then reinstated by a judge’s order. And a 14-year-old student went viral after blasting the board for putting her in danger by allowing transgender students to use girls’ locker rooms.

Tigges told Carlson the meeting was scheduled to run until 7 p.m. but that the board “shut it down” early after hearing applause “they didn’t like.”

The applause was for former state Sen. Richard Black blasting board members over their controversial policies:

The LCPS shut down the public input after the audience erupted in applause at the end of my speech. Hundreds of pa… https://t.co/3RMID2yLmQ

“You retaliated against Tanner Cross by yanking him from teaching for addressing a public hearing of this board,” Black told the board angrily. “The judge ordered you to reinstate Mr. Cross because if his comments were not protected speech, then free speech does not exist at all. It’s absurd and immoral for teachers to call boys ‘girls’ and girls ‘boys.’ You’re making teachers lie to students, and even kids know that it’s wrong. This board has a dark history of suppressing free speech. They caught you red-handed with an enemies list to punish opponents of critical race theory. You’re teaching children to hate others because of their skin color, and you’re forcing them to lie about other kids’ gender. I am disgusted by your bigotry and your depravity.”

Black’s microphone was cut just before his last words, and the crowd began cheering.

The board unanimously voted to shut down the meeting after repeatedly issuing warnings about decorum and disruptions,
WRC-TV reported, adding that parents chanted “Shame on you!” and raised their middle fingers.

Nearly 260 people had signed up to speak at the meeting, the station added.

But a school district spokesperson said “the meeting has degenerated” as the board shut it down and ordered people to leave, WRC said.

“Every single person there, all 500 parents, had their First Amendment rights trampled on by the Loudoun County school board and its superintendent,” Tigges told Carlson in regard to the meeting that was declared an “unlawful assembly.”

Tigges said he was arrested around 5:45 p.m. after attendees were ordered to leave the room. Video shows Tigges arguing with officers, telling them they’re complicit in suppressing free speech, when one of them asks Tigges if he’s refusing to leave the room.

“Yes, I’m refusing to leave,” he replies to the officer.

“All right,” the officer replies. “Deputies, please arrest this individual for trespassing.”

And with that, Tigges was handcuffed.

WRC characterized Tigges’ arrest as receiving a “summons for trespassing” but reported a separate incident as an arrest that involved a man who became disorderly and resisted officers, who tackled the man.

As Tigges watched video of the separate incident during his interview with Carlson, he said it likely was “a complete leftist diversionary tactic that was preplanned, because no one that was lined up to speak was involved in any of that.”

Carlson called the officers who arrested Tigges “stooge cops who should be ashamed of themselves.”

Tigges admitted that the whole thing is “infuriating.”

“There’s such a high standard for free speech,” he added to Carlson. “It is the most sacred of all of our rights, and it takes an amazing amount of justification to shut down free speech.”

In an interview with the Federalist, Tigges characterized himself as a “taxpayer who is concerned about the moral decay across our whole country but specifically the indoctrination of children, and things that just aren’t true.” He added to the outlet that he’s kept his kids out of Loudoun County schools but is still invested in the district’s direction.

“I do care about my neighbors, and I care about friends that have kids there and the indoctrination that’s going on is awful,” Tigges added to the Federalist.

Two arrests made at the Loudoun County, Virginia school board meeting after it was declared an unlawful assembly an… https://t.co/VBmAzaNGPA