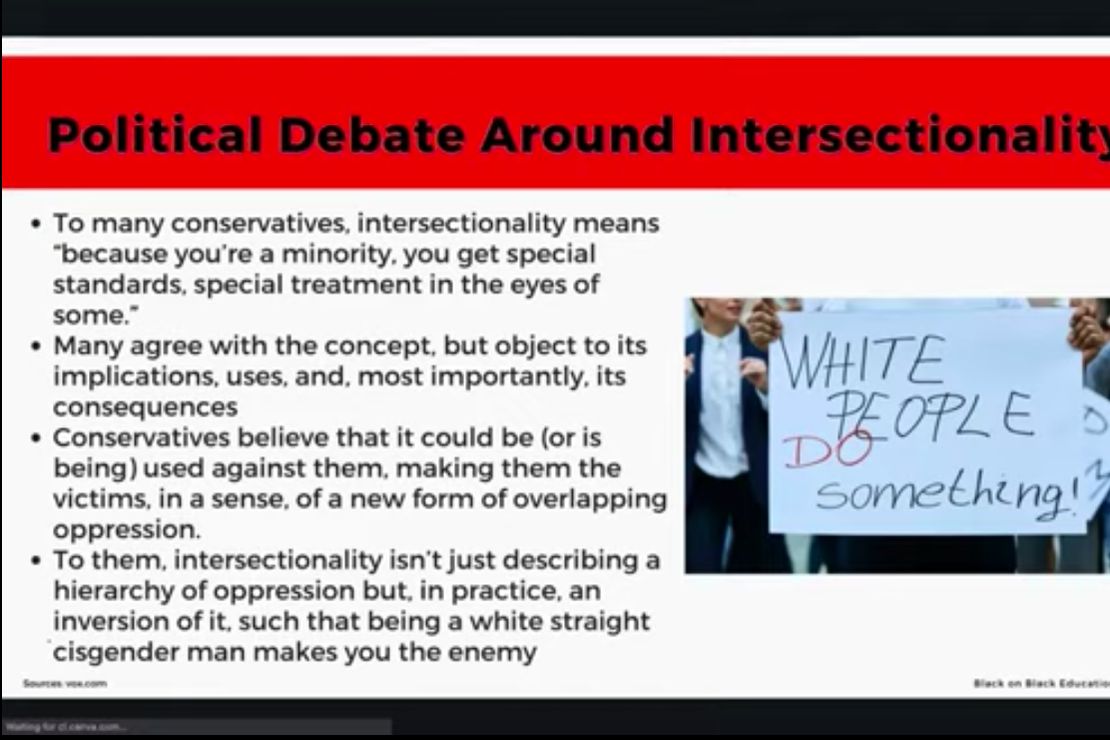 Expressions of intersectional Marxist theory should come with a warning label. Warning: Ingesting this idea may result in insanity. Seriously, true mindless lunacy may follow from your mental mastication of this besotted “logic.” I disclaim any legal liability for any conniptions you may experience.

If indeed I am in the clear, I’d like to share with you a truly insane formulation that comes straight out of mixing Marxist critical race theory, intersectionality, and gender mumbo-jumbo into a blender, adding some Everclear, and downing it in one gulp.

Quite frankly, I rarely indulge in nut-picking and I prefer to cover news, not the deranged rantings of some mostly unidentified person in a Zoom video, but at the risk of my own sanity, I could not let this one go by without a comment or two.

Our esteemed managing editor, Paula Bolyard, sent it to me, and my response was “holy hell.” Here at last, dear reader, I shall inform you of the absurdity by which I have been “triggered.” Now that the phrase “trigger warning” has been canceled for insufficient wokeness, I feel quite comfortable saying, “Trigger warning!”

“The reverse would be for non-white males, where they would have biologically male gender but ideological feminine gender, because non-white is considered feminine,” the woman adds. She laments that “these things are not really being discussed.”

She says her theory explains “why there’s so much confusion as to why is it that white women are calling 9-1-1 on black men, for instance, in the United States… they’ve activated the male component under the ideology by using their race.”

If there is anyone in your life that thinks teaching Critical Race Theory in the k-12 classroom is a good idea (or on the fence), please please show them this video.

This is what they want to teach kids.

An organization named Mythinformed MKE shared this clip on Facebook and Twitter, and I became curious. I reached out to the Milwaukee group, and the group graciously directed me to the original source of the video, an hour-long Zoom session titled “I’m Anti-Racist vs. I’m Not Racist: Intersectionality” posted by “Black on Black Education.”

“Black on Black Education is a virtual community, started to bring black educators, experts, and thinkers, in various fields, to increase learning in the black community,” the YouTube page explains. “Although our content intends to be catered to the black community we are calling for allies in our quest to reimagine and redefine what a high-quality education means for this community. So please follow, share and interact with us.”

It remains unclear who exactly broached the idea of “ideological gender.” The woman’s comments begin around the 42-minute mark in the video below. The video’s host does not directly address the idea of “ideological gender.” Instead, she repeats the basic transgender pablum about a person’s biological sex being distinct from a nebulous “gender identity.”

It seems unlikely this idea of “ideological gender” will get much traction. For this reason, I’d consider engaging with these comments to be a form of nut-picking — some random crazy person said something, and I’m going to respond to it. Even so, I figured that you, gracious paying subscriber, would appreciate a response.

While this woman’s idea of “ideological gender” is not part of the teachings of mainstream intersectionality, it is one wacky interpretation that seems plausible in an intersectional lens.

Ironically, this concept of “ideological gender” is heterosexist, transphobic, bigoted, et cetera. How dare this woman assume that the male is the more dominant and the female the more submissive?! What is this, the oppressive 1950s or the Victorian Era? Girl power, y’all.

In fact, the success of “whiteness” often is a tautology. “Whiteness” merely entails any cultural trait that helps a person succeed in society. In a similar vein, intersectional theorists could claim that “maleness” involves any connection to things that help a person succeed. If, for instance, more women graduate from college than men, then perhaps women have more “maleness” than men. This does not mean the society is no longer “patriarchal,” it just means women dominate the “patriarchy.”

Members of oppressed groups are sad victims who must be pitied and helped — unless they support the eeeevil conservative oppressors. In this case, the woman strained to interpret white women as somehow “dominant” or “masculine” in the fact that they occasionally call the police.

While gender has nothing to do with race, this woman’s “ideological gender” theory ironically echoes the Left because the radical identitiarians treat both race and gender as forms of identity. Not only have white women “identified” as black in order to obtain certain societal advantages, but even Mayor Lori Lightfoot, who announced an explicitly anti-white journalism access policy, said that she aimed to combat an imbalance because “more than half the city identifies as Black, Latino, AAPI or Native American” (emphasis added).

Race is theoretically a matter of skin color, not up for interpretation or debate. However, unlike biological sex, race is not binary — race truly is a spectrum. Ironically, the Left’s notion of gender as something societally constructed along a spectrum does not fit the male-female binary of sex, but it does fit the phenomenon of race.

Elizabeth Warren, for example, thought it was acceptable for her to identify as Native American due to a family legend about her ancestry. The Cherokee Nation did not accept her, however, and the nation took great offense at Warren’s DNA test fiasco.

I myself am a quarter Belorussian-Jewish. I cannot claim true Jewish status because my ancestry traces from my father, not my mother. I have enough Jewish blood that the Nazis would have put me in a concentration camp, but I don’t have the right Jewish heritage to claim true Jewish ethnic status. If I convert to Judaism, however, that might change.

Yet I cannot change the fact that I am male. If I dress in a skirt, speak in a high voice, even cut off my manhood, I will still be male because down to the level of DNA in every adult cell in my body, there is an X and a Y chromosome.

Yet the Left ironically claims that race is innate and that sex is fluid.

Perhaps the woman who came up with “ideological gender” just can’t keep it straight. I can certainly sympathize with that.

If nothing else, however, this video illustrates the absurdity of the intersectional mentality and the transgender orthodoxy that forms a key part of it.