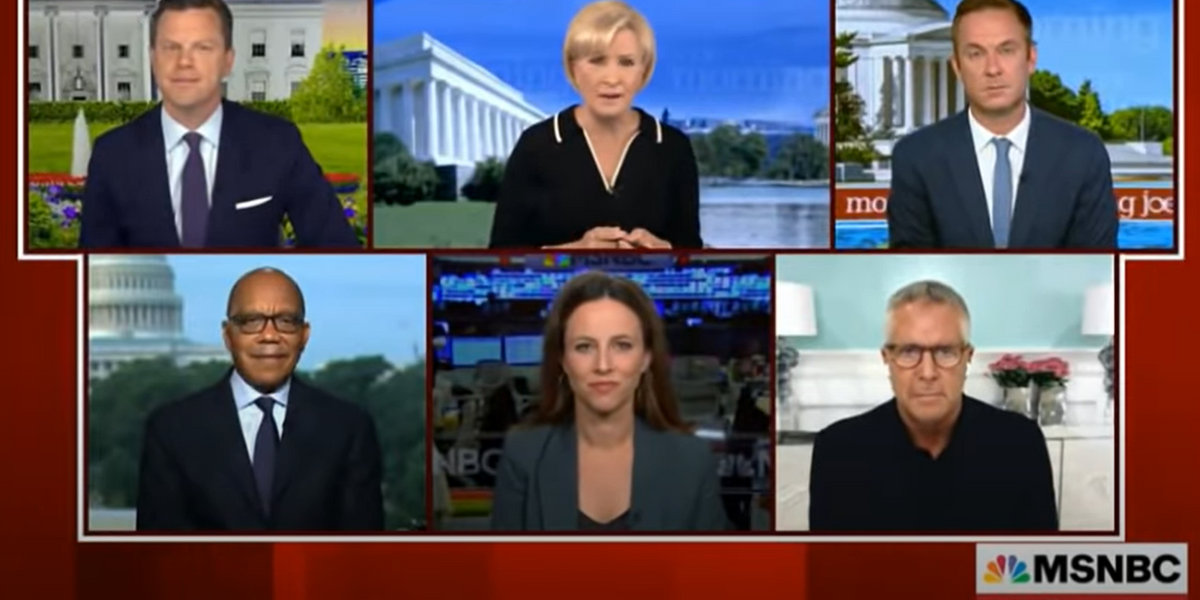 While discussing the possibility of COVID-19 vaccine mandates, a frequent MSNBC contributor declared that there are a certain amount of Americans who need “to be told what to do” by their government. Donny Deutsch told people that they “don’t have a choice” when it comes to face mask mandates and required vaccinations for coronavirus.

During Friday’s episode of “Morning Joe,” MSNBC host Mika Brzezinski began the segment by giving rare praise to a Republican. Brzezinski applauded Alabama Gov. Kay Ivey (R) for scolding her constituents who had yet to get vaccinated. “Folks are supposed to have common sense,” Ivey said on Thursday. “But it’s time to start blaming the unvaccinated folks, not the regular folks. It’s the unvaccinated folks that are letting us down.”

“She’s fed up and she’s saying it like it is, Brzezinski said of Ivey, and spoke for the Alabama governor, “This is your choice to get COVID and die.”

Deutsch reacted by saying, “That’s the kind of plain talk we need at this point. We just gotta say, ‘What the frick are you people doing?'”

Brzezinski jumped in, “This is a Republican governor saying, ‘Stop making yourself die, and others as well. Get the vaccine, I cannot teach you common sense.'”

As the Daily Wire reports, “Co-host Mika Brzezinski favorably quoted an op-ed from Bloomberg News, titled ‘The Case for Vaccine Mandates,’ which reads, ‘States should instead be issuing their own vaccine passports, and requiring health-care workers to be vaccinated.'”

Associated Press White House reporter Jonathan Lemire, who was also on the MSNBC panel, asked how a mask mandate would be seen by the public that wants to return to normalcy.

Lemire asked, “There was such a sense this summer of being relieved, of not having to wear masks anymore. How will this play? Isn’t this a political firestorm waiting, if masks are asked to come back?”

Deutsch responded, “I think it was a lot harder the first time around … creating new behavior versus returning to, kind of, behavior we’ve already been through.”

“So look, whether it’s a mandated mask, a mandated vaccine is, at this point, there is a percentage of the population that — who cares whether they’re angry or upset about it? There’s 330 million people in this country,” he continued. “We need to protect ourselves. I’m done worrying about what people think. I’m done worrying about, ‘Is there going to be a firestorm?'”

Deutsch then ranted, “Whether it’s a mandated mask or a mandated vaccine, there’s an idiot percentage of this population that just needs to be told what to do. And guess what? You don’t have a choice. Too bad.”

Deutsch has made headlines by spewing bombastic declarations. Last year, Deutsch said there is “no difference” between former President Donald Trump and Adolf Hitler. In 2019, Deutsch said the United States is headed towards a holocaust because Trump was the president at the time. In 2018, Deutsch likened Trump supporters to “Nazis.” Another hyperbolic prediction Deutsch made during the last administration is that Trump would refuse to leave the White House if he lost the 2020 election and would use the military to retain power.