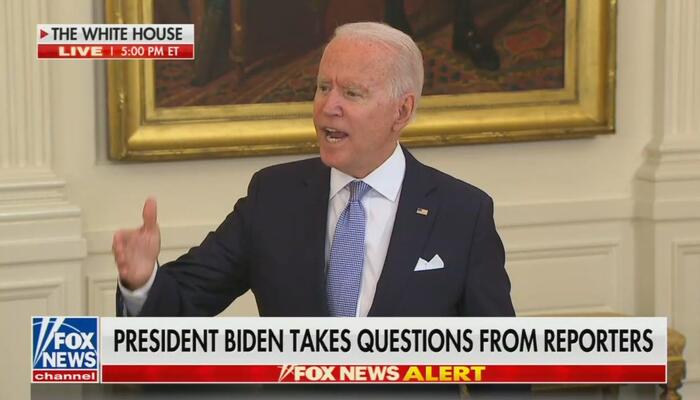 When it seemed like only a few of his colleagues were still outraged at the Biden administration’s decision to bring back indoor masking for much of the country (compared to the uproar on Tuesday), Fox News’s Peter Doocy sparred Thursday afternoon with White House Principal Deputy Press Secretary Karine Jean-Pierre and President Biden over the regime’s inconsistent (and arguably misleading) messaging masks.

And in the case of the exchange with President, Doocy’s fact-checking and questioning brought out the angry Biden (as opposed to the forgetful or whispering Biden).

Prior to Biden giving a speech about the return of masks and the threat of bringing back closures and restrictions, Doocy first went to Jean-Pierre with this about Biden’s credibility:

So, President Biden says that we are not returning to lockdowns, shutdowns, and school closures, but he also once said that we didn’t have to wear masks anymore once we were vaccinated, so why should Americans trust him now?

Jena-Pierre replied that Americans should because “we listen to the sciences” and “expert[s]” because “[t]his is a public health situation” that’s “about saving lives” and thus “not about politics at all.”

Doocy drilled down, noting that, by this logic, “shutdowns” and “school closures” could very well be in our future “if scientists” tell Biden to do so.

Jean-Pierre seemed to have replied in the affirmative, saying that they’ll continue to “listen to the CDC and the expert[s]” because “the CDC is a — is a body that is very well respected.”

Doocy pivoted to schools and the interest group that seems to be running the federal government: the teachers unions.

“[A]fter this new guidance came out, the American Federation of Teachers Randi Weingarten came out to say ‘we are going to try to open up schools.’ Is that good enough for the President? Just trying,” asked Doocy.

Jean-Pierre insisted that Biden and Education Secretary Cardona have “been very clear” that “they would want to see all schools open,” but Doocy followed up as it wasn’t exactly a definitive answer.

But again, Jean-Pierre took a page out of the Psaki playbook and offered word salad.

Doocy closed out his back-and-forth with her by pointing out the hypocrisy between having vaccinated Americans wear masks again while illegal immigrants continue to flood into the country (click “expand”):

DOOCY: And last one. Just because you talked about this administration having a priority of protecting the American people, can you help us understand why is it that the federal government is asking vaccinated Americans to wear masks to stop the spread of Covid-19 at the same time that federal agents are also releasing Covid-19-positive border crossers into small towns in Texas? How is that stopping the spread?

JEAN-PIERRE: I just want to be very clear here. I do want to answer your question, Peter. First, just to step back and do this 30,000 foot view, there’s been no change in Title 42. Families and single adults are expelled if possible when apprehended at the southern border. The majority of apprehensions that we saw at the border in June were expelled. Those who can’t be expelled are or are awaiting processing are often placed in altern — alternatives to detention programs while their cases are being reviewed. CBP provides migrants with PPE from the moment — from the moment they are taken into custody and migrants are required to keep masks on at all times, including when they are transferred or are in the process of being released. If anyone exhibits signs of illness in CPB custody, they are referred to local health systems for appropriate testing, diagnosis, isolation, and treatment. CPB takes its responsibility to prevent the spread of communicable diseases very, very seriously. We value our partners in local communities whose work is critical to moving individuals safely, out of custody and through appropriate immigration pathway and assist in mitigating Covid-19 and isolating — quarantine when needed. That’s what I have for you, Peter.

Fast-forward to the press conference and Doocy repeatedly tried to shout a question to Biden, but unsurprisingly, he wasn’t interested.

But as Biden walked away, Doocy caught his attention: “Mr. President you said if you were fully vaccinated, you would no longer need to wear a mask?”

Doocy tried to say more, but Biden angrily cut him off with this false claim: “No, I didn’t say that.”

Doocy hit back with, “you did,” but Biden realized mid-thought he had been caught: “I said if fully vaccinated in an area where you do not have — well, let me clarify that.”

This gave Doocy an opening: “In May, you made it sound like a vaccine was the ticket to losing masks forever.”

The President replied that his statement was “true at the time” as he believed the vaccination rates would be higher than they are now and he didn’t know about the Delta variant.

Seven other reporters got questions in before Doocy, including pointed questions from ABC’s Rachel Scott and Reuters’s Steve Holland. Others — like NPR’s Franco Ordoñez and PBS’s Yamiche Alcindor — focused on pushing mandates and even vaccine passports.

In Scott’s case, her firm question about new lockdowns didn’t draw from Biden the same sort of anger Doocy would (click “expand”):

HOLLAND: Mr. President, how long do you think it might be necessary to wear a mask, and at what point do you think people might have to have a booster shot?

BIDEN: I said in my talk the booster shot is not needed now. It is possible that it’ll be needed later. I don’t know. They don’t — science hasn’t dictated that yet, and the first part of your question?

HOLLAND: How long do you think people might have to wear masks again?

SCOTT: Mr. President, you said earlier this week that we are not headed back towards lockdowns, but if the science is evolving, how can you be so confident in that? We heard you saying weeks ago that the virus was on the run, but Dr. Fauci has also indicated that we are heading in the wrong direction.

BIDEN: You’re take — you’re literally correct on everything you said, but it doesn’t come to the conclusion you’re implying. It is clear that if everybody’s vaccinated, the existing vaccines work to prevent deaths, serious illness, hospitalization. Okay? So, if tomorrow I could wave a wand and every American was vaccinated, then, in fact, we’d be out of the woods. Now, can something else happen a year from now? Can there be a different virus? Can there be something? It’s possible, but I’m talking about Covid and the existing variants that have come forward so far. So it makes a — it’s a simple proposition. If you’re vaccinated, you find yourself in a situation where you are highly unlikely, even if you somehow get the virus, very small percentage do, that you are not going to be hospitalized. You’re not going to be on a ventilator, you’re not going to be sick, but you could be in a position to possibly spread it to someone who wasn’t, if you have it in you. Yes.

ORDOÑEZ: Mr. President, thank you. I wanted to ask why not require that people show proof that they’re vaccinated and also, if you could just — with the four million, how much of an impact do you think this will have? Do you have a projection, sir?

BIDEN: A projection on what?

ORDOÑEZ: On how many people will get vaccinated by putting in this system.

To see the relevant briefing and press conference transcript from July 29, click here.