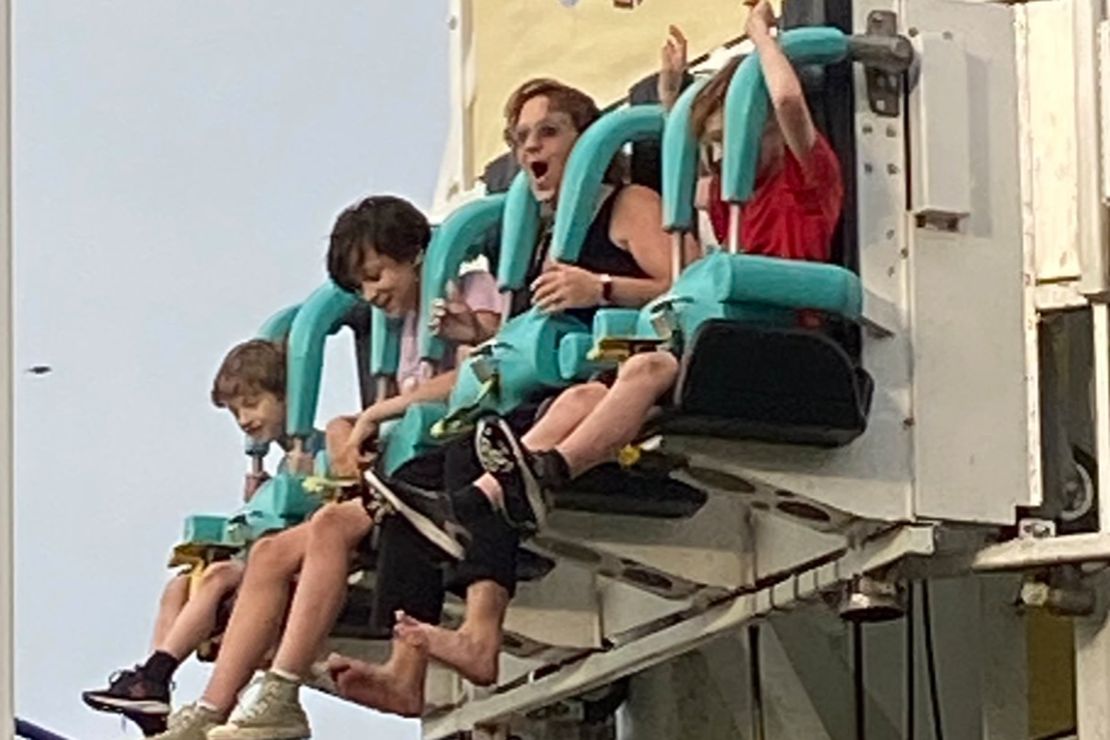 Hey, everyone! I’m back from a well-deserved vacation with my family. We stuffed the kids into a pickup truck with all our bikes strapped on the back and drove all the way to Wisconsin from New York. The ride was not fun, and the children held a meeting after we got home and demanded that we only use my minivan from now on so they can have more space to spread out. As parents, we know that we aren’t going to get any rest on a family vacation. We always come back more tired than when we left, and this time was no exception. Mr. Fox was recovering from major spinal surgery that we didn’t expect to be so major, and he found himself driving across the country four days afterward while not being able to take his pain meds. Our six year old asked “Are we there yet?” before we had exited our town—if that’s any indication of how it went.

I know what you’re all wondering. “Why didn’t you drive?” I tried. I took one look in the rearview mirror at the bikes bouncing up and down and gasped so loud that Mr. Fox jumped and aggravated his neck wound.

I think I put in two and a half hours before he couldn’t take it anymore. The poor man did the whole thing basically without help. On the way out of Wisconsin, we went to Chicago for two short days and were tourists in our hometown. This was equal parts wonderful and terrifying. I had an otherworldly experience on the Eisenhower after 10 p.m. I don’t recommend it. I had forgotten how crazy people drive in Chicago. When I was a teen I was right there with them doing 90 mph and weaving in and out of traffic (and if you think that’s unsafe, try driving normally in Chicago and see where that gets you). There was a shooting on that same road two hours after I was off it. It’s not a safe place, and I don’t recommend you go there unless you know what you’re doing—which means you have to be a Chicago native—and even then there’s still a higher chance of getting shot on the expressway than finding parking under $60 a day. Visitors should skip Chicago and go to Springfield or somewhere it’s safe. Lightfoot is destroying Chicago, and it’s sad. But this is the good news report, right?

Not bad when you’re safe in your room. From a distance Chicago is beautiful pic.twitter.com/W0siQfYUQX

Thrill seekers should try the Eisenhower expressway on a Saturday night after 10pm. More exciting than any roller coaster at #CedarPoint (though higher chance of death.) pic.twitter.com/nuG9NWBcZa

A word about Cedar Point Amusement Park. We made a one-night pit stop at Cedar Point before we hit Wisconsin. It was so fun and a good way to get out of a cramped truck and blow off some steam. This place is like Disney World used to be back when it was fun. Cedar Point is so clean and meticulously run. I have nothing but great things to say about this place. I have regular neck issues and I thought I couldn’t go on roller coasters anymore. But since Mr. Fox was not allowed on roller coasters with nine staples in the back of his neck, I was the only adult available to take my kids on scary rides. I had to man up and try. I figured if my neck got bounced out of place I could use it as an excuse to get a massage in Wisconsin. It turned out that the roller coasters at Cedar Point are so smooth it was nothing but heart-pounding thrills. I was able to take my 12 year old on her first upside-down rides. She loved it. The Power Tower was my favorite. When we got all the way to the top, my 6 year old started to panic and almost cried–but when that drop started he was squealing with joy and I was hovering somewhere over my body for most of it. I’ve never felt that before, but it appeared to have separated my spirit from my encasement for a few seconds. It was thrilling. (Look at my face in the photo above. Classic.)

Valravn is the first coaster we tried, and it was super smooth all the way until the final stop at the end. Why do they have to jerk you so hard? Other than that, though, it was great fun.

After Valravn we rode the Raptor, and if we had more time I would have been in line for that for the next few hours doing it over and over. Built in 1994, this thing is still as smooth as the day it opened, even on the twists! I didn’t feel any pressure on my neck. (This is 45, by the way. I’m quickly on my way to morphing my career into writing how-to guides for people over 45 trying to navigate life without throwing out their backs. Just yesterday, Paula Bolyard was cackling at me because I had to report to her that I was injured and not able to finish my assignments. She was laughing because I hurt myself while lying in bed. I literally just moved my arm over my head and tore or pulled something. She said, “It sucks getting old. Even going to bed is dangerous.”)

We stayed on-site at Cedar Lighthouse Point campground in a small cabin right on Lake Erie. It was gorgeous. What a place! You can also bring RVs or stay in a tent, and it’s within walking distance of the park. There are also shuttles that will take you to nearby restaurants for no charge. It was so fun, and the only downside is that we didn’t have more time there. I will definitely be back.

If you get a chance to visit ⁦@cedarpoint⁩ stay at #LighthousePoint cabins. Amazing place. Great amusement park! pic.twitter.com/FFLi0lePFa

We took the kids to their first Cubs game at the historic and beautiful Wrigley Field. It was glorious—ridiculously expensive, but glorious. The ladies who keep the bathrooms clean should get a raise. They are spotless. I mean SPOTLESS. I should have taken photos, but that would have been weird. But it was 100 degrees and the bathrooms are air-conditioned–I found myself hanging out in there because they’re cool and smell amazing. (This does not make sense at all, but that’s how it is. They’re so clean that I think even Paula would sit on the toilet seats without three layers of tissue paper to protect her from the thigh herpes she thinks is waiting for her in every public bathroom.) The customer service at Wrigley is top-notch, and it should be for what it costs.

There is nothing like the roar of a crowd and a Chicago hot dog. Do NOT put ketchup on a hot dog, people. That’s gross. Most of our Chicago trip was going from one favorite food spot to the next. We miss the food so much. We ate pizza at Pequod’s, Italian Beef at Portillo’s (though I prefer Mr. Beef), “Nuts on Clark” Chicago-style popcorn mix (cheese and caramel mixed together—don’t make that face before you try it), and every other Chicago favorite we could find. It was two days of nonstop eating.

It’s been way too long, Chicago. I ❤️ u. pic.twitter.com/bkVTNxNggg

I almost forgot the craziest part! You can’t make a trip to Obamaland without an Obama sighting! (Click through to see all the photos and hear about the experience of seeing the Lightbringer up close.)

On our trip through Chicago we stopped at the Art Institute and look how lucky we got! I got to see the worst portraits ever painted in person! It was thrilling. It was like a shrine. First you walk through rooms filled with Obama’s glorious history pic.twitter.com/WS9kxeRUJm

In Wisconsin, we got to visit the grandparents and see the cousins and spent two days at Noah’s Ark Waterpark, which is our favorite place to cool off in Wisconsin. We also went on a jet boat (we skipped the Ducks because we’ve done it a million times). The Jet Boat is so much fun.

If you ever visit the #WisconsinDells don’t miss the Jet Boat! But don’t believe the ticket girl who tells you you might get sprayed. You’re going to get soaked to your underwear. pic.twitter.com/djHyvyJbPa

That was some serious fun. And after the year we’ve all had, fun is on the menu.

Have a great weekend everyone!