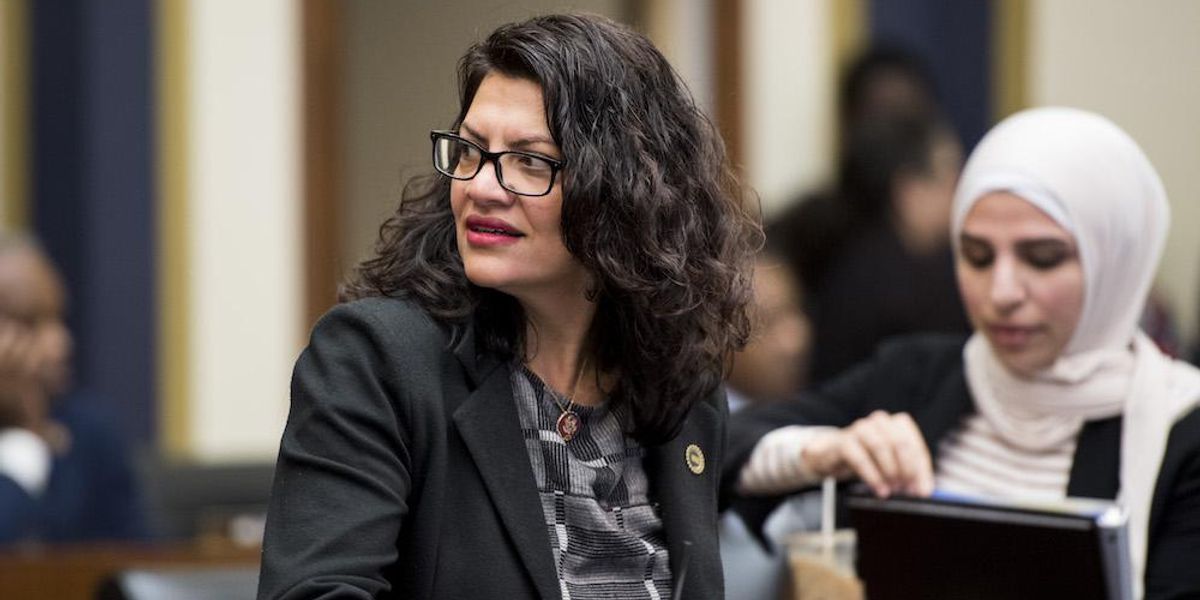 Leftist Democratic Rep. Rashida Tlaib accused people “behind the curtain” of making money off the abuse and exploitation of people “from Gaza to Detroit” during recently posted remarks to the 2021 Democratic Socialists of America National Convention.

Her claims have the leader of the Anti-Defamation League fuming and accusing her of “ugly antisemitic dog whistling,” Newsweek reported Wednesday.

What did Tlaib say?

In comments to the DSA convention, “From the Ashes of the Old: Socialism for a New Tomorrow,” which is taking place virtually through Sunday, Tlaib told viewers, “For me, as a Palestinian-American, we also need to recognize as I think about my family and Palestine that continue to live under military occupation and how that really interacts with this beautiful Black city that I grew up in.”

“I always tell people cutting people off from water is violence,” she added. “And they do it from Gaza to Detroit. And it’s a way to control people, to oppress people, and it’s those structures that we continue to fight against.”

Of course, the lawmaker who has a reputation for making anti-Semitic remarks and accusing Israel of all sorts of atrocities, knew exactly whom to blame: The people “behind the curtain” who “make money” off the exploitation and harm of Palestinians and others.

I know you all understand the structure we’ve been living under right now is designed by those that exploit the rest of us for their own profit. I always say to people, “I don’t care if it’s the issue around the issue of global rights, and our fight to free Palestine, or to pushing back against those that don’t believe in a minimum wage or … a right to health care and so much more.” And I tell those same people, that if you open the curtain and look behind the curtain, it’s the same people that make money and — yes they do — off of racism, off of these broken policies. There is someone there making money, and you saw it, it was so exposed during the pandemic.

Because of all those structures — everything that was set up — they made record profit when we were all having some of the challenging, most difficult times in our lifetime, at that moment. And again, they made record profit, so if anything this pandemic has just exposed what we all have been fighting against.

How did the ADL respond?

Anti-Defamation League CEO Jonathan Greenblatt hopped on Twitter on Tuesday to call out the socialist lawmaker for what was, in his mind, a clearly anti-Semitic diatribe complete with dog whistles for her intended audience.

“Stunning to hear @RashidaTlaib claim ‘behind the curtain,’ those who prevent a ‘free Palestine’ are the “same people’ who exploit ‘regular Americans,'” he wrote.

“We’ve heard this kind of ugly #antisemitic dog whistling before, but it’s appalling when it comes from a member of Congress,” he tweeted.

Stunning to hear @RashidaTlaib claim “behind the curtain,” those who prevent a “free Palestine” are the “same peopl… https://t.co/euo6ZBIr0j

Who Wants to Unnecessarily Vaccinate Kids? Take a Wild Guess.
Newly surfaced video squashes narrative that Border Patrol agents on horses used whips against migrants
Here’s What Kamala Harris Is Doing to Try and Salvage Her Presidential Aspirations
Family says their 10-year-old boy died from attempting a dangerous TikTok challenge
Students across the nation are being charged for vandalism over the ‘devious lick’ TikTok challenge