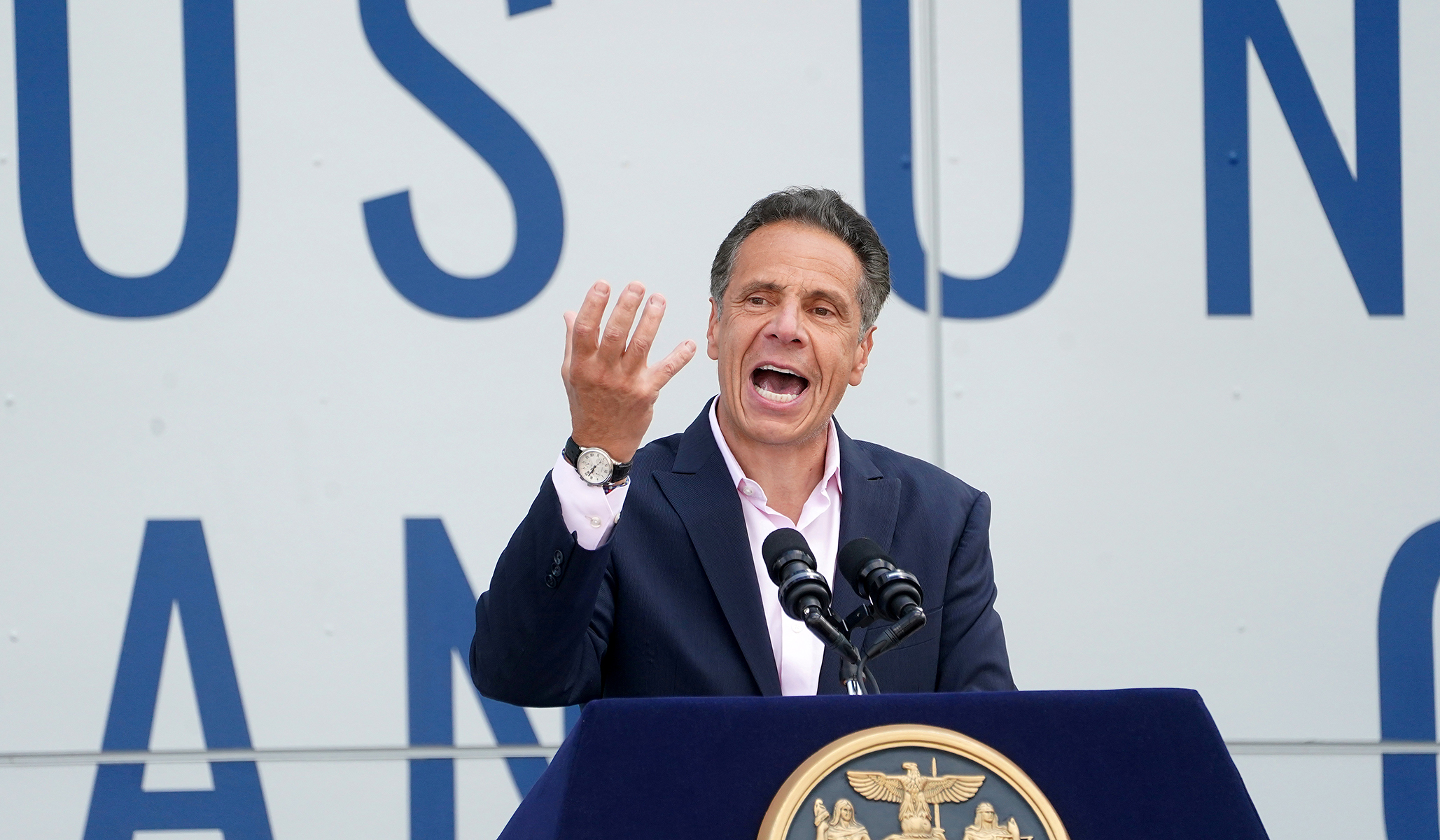 On the menu today: Why Democrats’ calling for Andrew Cuomo to resign as governor doesn’t really amount to much; why the lesson of Cuomo is that the star-makers of American politics are easily charmed, not interested in the details of governing, and utterly incapable of spotting an abusive predator; Barack Obama scales down his big birthday bash; the Washington Post rakes Washington D.C. mayor Muriel Bowser over the coals; and wondering when Democrats will find it reasonable to expect people to pay the rent they owe.

Don’t Issue a Meaningless Call for Cuomo’s Resignation, Remove Him

I would love to be proven wrong, but it is exceptionally difficult to envision a scenario where Andrew Cuomo resigns as governor of New York.

How utterly, psychotically confident is Andrew Cuomo that he can get away with anything? This confident:

After Trooper #1 joined the [personal protective detail], the Governor sexually harassed her on a number of occasions, including by: (1) running his hand across her stomach, from her belly button to her right hip, while she held a door open for him at an event; (2) running his finger down her back, from the top of her neck down her spine to the middle of her back, saying “hey, you,”7 while she was standing in front of him in an elevator; (3) kissing her (and only her) on the cheek in front of another Trooper and asking to kiss her on another occasion, which she deflected; and (4) making sexually suggestive and gender-based comments, including (a) asking her to help him find a girlfriend and describing his criteria for a girlfriend as someone who “[c]an handle pain,”8 (b) asking her why she wanted to get married when marriage means “your sex drive goes down,”9 and (c) asking her why she did not wear a dress. Trooper #1 found these interactions with the Governor not only offensive and uncomfortable, but markedly different from the way the Governor interacted with members of the PSU who were men, and she conveyed these incidents contemporaneously to colleagues. Several other PSU Troopers corroborated Trooper #1’s allegations, including some who had personally witnessed some of the touching and comments as well as the gender-based difference in the way the Governor treated Troopers.

Now, we’ve heard a lot of stories about powerful men hitting on and harassing women who work for them. But Andrew Cuomo stands out for repeatedly putting the moves on and inappropriately touching a law enforcement officer carrying a firearm. Even Bill Clinton would probably say, “Whoa, man, that’s reckless.”

Speaking of Clinton, Cuomo’s defense was to release a video demonstrating that he touched lots of people — including Bill Clinton.

By the way, let’s get one thing straight: If you’re a touchy-feely person who likes putting hands on shoulders or kissing people hello, those gestures are not inherently harassment. But if someone asks you not to continue that habit with them, the decision to continue to touch them in a way that makes them uncomfortable is indeed harassment!

The governor’s brother Chris didn’t mention the scandal involving his brother at all on his prime-time news program last night, and continued his focus on the real story, which is that Florida governor Ron DeSantis is the source of all evil and suffering in the world. Then again, yesterday, we learned that the CNN anchor helped write Andrew Cuomo’s statement on February 28, insisting the governor’s actions were “misinterpreted as an unwanted flirtation.”

Hell of a job, CNN. Seth Mandel is correct that, “a not-insignificant part of this is a CNN media scandal.” (More on this angle below.)

The only thing that matters is whether the New York state legislature will impeach him and remove him from office — which is why the National Review editors do not declare “Cuomo must go,” but instead, “Make Cuomo Go.” Calling on Cuomo to resign is asking a ruthless, amoral, narcissistic predator to do the right thing.

The attorney general’s report is clear, thorough, and offers no wiggle room or other interpretations:

The Governor sexually harassed a number of current and former New York State employees by, among other things, engaging in unwelcome and nonconsensual touching, as well as making numerous offensive comments of a suggestive and sexual nature that created a hostile work environment for women. Our investigation revealed that the Governor’s sexually harassing behavior was not limited to members of his own staff, but extended to other State employees, including a State Trooper on his protective detail and members of the public. We also conclude that the Executive Chamber’s culture — one filled with fear and intimidation, while at the same time normalizing the Governor’s frequent flirtations and gender-based comments — contributed to the conditions that allowed the sexual harassment to occur and persist.

If this isn’t bad enough to impeach a governor, what is? If the state legislature chooses to not impeach and remove, they are sending the signal that this behavior is regrettable but not consequential. In a Fortune 500 company, that behavior gets you fired. But in politics, that behavior generates tsk-tsk statements until all of your allies, who tout themselves as allies of women, choose to forget about it. The message is clear: Sexual harassment is wrong, unless you’re sufficiently politically powerful, because in those circumstances, people are willing to avert their eyes and pretend it didn’t happen.

Long before we knew Cuomo’s administration was covering up the total number of deaths in nursing homes, there was little evidence that Cuomo was a great leader, sparing his state the worst effects of the pandemic. By and large, the media liked the way he looked and sounded on television. In fact, Cuomo was so good on television, he won an Emmy! And that was the criteria that mattered most at the highest heights of the media world. Many of the people who think of themselves as the sharpest and keenest minds, most deserving to scrutinize our elected leaders, are really not much more than theater critics — capable of articulating how a particular performance makes them feel, and not much more.

Beyond that, yesterday some guy on Twitter disputed my statement that the national media “celebrated” Cuomo throughout most of 2020.

He apparently missed the Rolling Stone cover; Politico declaring him a “social media superstar”; Harry Enten of CNN declaring that; “The rise of Cuomo shows that times of tragedy can make very unlikely political heroes”; Carl Bernstein declaring that, “[It’s] real leadership of the kind the president of the United States should have provided to the American people throughout this crisis, but hasn’t”; Jesse McKinley and Shane Goldmacher of the New York Times declaring that, “Cuomo’s handling of the crisis has fostered a nationwide following; Mr. Biden called Mr. Cuomo’s briefings a ‘lesson in leadership,’ and others have described them as communal therapy sessions”; Ben Smith of the New York Times declaring that, “Cuomo has emerged as the executive best suited for the coronavirus crisis”; the New York Post (!) declaring that New York women were developing crushes on him; and Jen Rubin gushing: “Watching Andrew Cuomo is inspiring, uplifting, fascinating. He weaves details and humor and math and common sense all together. He is magnificent.” Even the Columbia Journalism Review started to worry that the adoring tone of the coverage was overlooking real problems in Cuomo’s decision-making.

And this is all separate from his appearances on his brother’s CNN program. I suspect you remember or can find examples I didn’t list above. Oh, another classic example, from Rebecca Fishbein of Jezebel: “I swooned when he told a reporter he had his own workout routine. I have watched a clip of him and brother Chris Cuomo bickering about their mother at least 20 times. I think I have a crush?”

So no, I’m not exaggerating when I say many members of the national media celebrated Andrew Cuomo.

People might ask, “Jim, why are you picking on some random guy on Twitter?” Because a lot of people would prefer that we all forgot how the media deliberately chose to spotlight and commend Andrew Cuomo as their ideal leader during the pandemic. They deliberately chose to applaud Cuomo, instead of other Democratic governors who actually did better jobs at keeping cases and deaths low. They decided Cuomo was the best, when he was likely the worst, or, at minimum, among the worst. Sure, these media voices didn’t know that Cuomo was a sexually harassing creep. But they chose to make him a star on the shallowest and least consequential criteria. And that is something we should keep in mind the next time some other Democrat who’s good on television comes down the pike. The star-makers of American politics are easily charmed, not interested in the details of governing, and utterly incapable of spotting an abusive predator.

If you’re hosting a party, and the attendees are vaccinated or recently tested negative, I think that’s fine — even if it’s a big party. Everybody who is unvaccinated is choosing to assume the risks, and everyone who is vaccinated is protected against severe reactions.

“Due to the new spread of the Delta variant over the past week, the President and Mrs. Obama have decided to significantly scale back the event to include only family and close friends,” Hannah Hankins, a spokeswoman for the former president, said in a statement Wednesday morning. “He’s appreciative of others sending their birthday wishes from afar and looks forward to seeing people soon.”

It would have been interesting to see the Obamas push back against the criticism, emphasizing that even with the Delta variant out there, gatherings of vaccinated people are safe — or at least, safe enough. But maybe the Obamas don’t want to get compared to Washington D.C. mayor Muriel Bowser.

This is an embarrassing moment for the mayor. The video clearly shows she is seated at a table, when the meal is over, in violation of her own mask mandate that says masks are not required indoors in these circumstances only when “actively eating or drinking.” But she could have used this an object lesson — that she got caught up in the celebratory mood and failed to put her mask back on. After all, everyone makes mistakes from time to time. But it’s important for political leaders to set an example — even when making an error.

Instead, she defended herself with partisan-laced spin and innuendo about “disinformation,” making false accusations about the reporter who exposed her actions. She earns Four Pinocchios.

ADDENDUM: Patrick Ruffini with the angle that I think is least discussed in the arguments of the eviction moratorium that Biden just extended — in violation of a Supreme Court ruling that limits the executive branch’s power:

Basically, the position being argued is that people should live rent-free indefinitely. What’s happening now is in no way an emergency like March 2020. The people affected by the eviction moratorium have already been given tons of free cash.

The unemployment rate has declined from 14.8 percent in April 2020 to 5.9 percent in June 2021. The country has 9.2 million unfilled jobs, which is a record. More than 850,000 people found jobs last month. When is it reasonable to expect people to start paying their rents again?

Conservatives Push Back on FEC’s Twitter Ruling
Hospital to pause delivering babies as maternity workers quit over vaccine mandate
This Is the Real Tragedy of Imaginary Genders
Illinois School Board Adjourns Meeting amid Fierce Debate Over Masking
Why Are People Still Fooled by Bogus Climate Predictions?