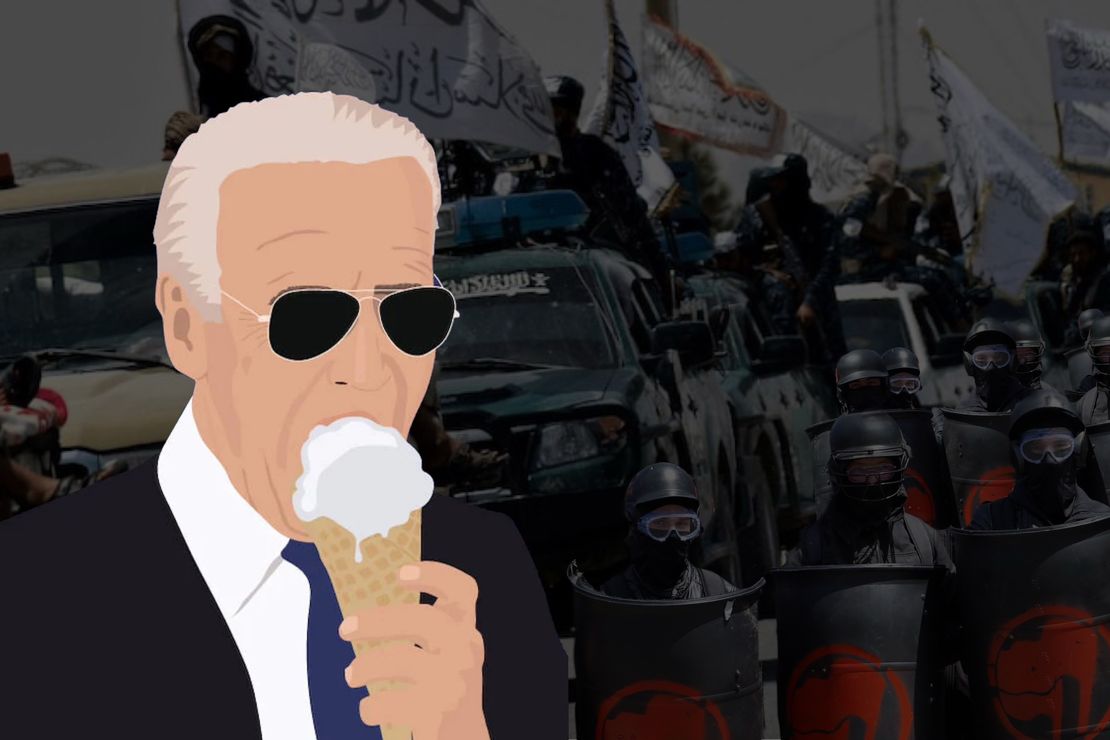 Joe Biden’s catastrophic Afghanistan bug out is the real reason behind vaccine mandates and the president’s unprecedented and unconstitutional Covid power grab.

It all started when Joe’s handlers needed to polish their “Build Back” Biden story. Joe needed a “victorious” 9/11 photo-op to create a “win” leading into the 2022 midterm elections.

They initially wanted the Afghanistan withdrawal to be on the terrorists’ favorite holiday, 9/11.

The same crack team who brought the world Benghazi (also on 9/11), pallets of mullah-bound and shrink -wrapped money, and the Iran nuclear “deal” plotted to get Joe his 9/11 photo-op.

“This is going to be so great!” his imaging people probably thought to themselves. “He’ll bound out on stage in front of a packed red, white, and blue-masked audience and declare victory in Afghanistan. We’re out! And we did that! OK, note to self: Let’s get a singer while he comes in — I wonder if Jay-Z and Beyonce are available. Hmm, check with their people. Balloon drop. Marine Corps band. Milley. Blinken. Austin. Do we want Kamala? No?”

But there was no extravaganza, only disaster, dishonor and “America Held Hostage.” Joe was around for that, too. Now we know what  Jimmy Carter whispered in his ear.

Barack Obama’s birthday party planner could have gotten us out of Afghanistan with more skill.

After the predictable Afghanistan disaster, which got 13 service members blown up, and after they took a flame thrower to a NATO agreement, kept our allies in the dark, and made the country a laughing stock, Team Biden had to pivot.

So Joe flew a plane into the U.S. Constitution.

The result is inescapable. Joe Biden now treats terrorists with more respect than the American people.

The former Gitmo terrorists whom President Obama and Vice President Biden gave up for traitorous Bowe Bergdahl will have more freedom than we do if Joe is able to follow through on his Covid vaccine threats.

That’s weird. We thought that’s exactly what the American experiment is all about.

That’s dumber than George W. Bush saying he had to “abandon free-market principles to save the free market.”

And Joe’s plan is dumb and unconstitutional.

Joe Biden plotted to “work around” the actual law to use the Labor Department to do what he should know is unconstitutional. After all, he was on the Senate Judiciary Committee a while back. Ask Clarence Thomas.

Allow me to pause now to send a message to the U.S. Supreme Court. Hey, Supreme Court, what about that “Chevron” deference now?

But it’s not just the Labor Department that Joe wants to use as leverage against working Americans. He wants the Education Department to hound governors, just like the antifa black bloc hounds cops.

Twenty years ago, we created the TSA to stop terrorists from bringing box cutters on planes. While the guys on the FBI terror list with $10 million bounties on their heads pony up to their new Afghan government jobs — thanks to Joe and his crack team —  Joe wants the government department meant to stop the box cutters to throw the book at mask objectors.

Joe Biden’s plan for Covid shot mandates is based on only one kind of science: political science. Millions of people who already had Covid have better immunity than those with the mRNA shots, according to the National Institutes of Health. Giving two shots to someone who’s already had Covid risks what’s called “high zone tolerance,” which begins quenching the immune response. But Joe says they’re the problem and he’s lost “patience” with them.

Others have religious objections to the vaccines because of the fetal cell line from aborted fetuses from which they are derived. We know Joe’s Department of Justice is suing Texas to make the world safer for baby killing, but some people actually object to using aborted babies for medicine. Joe should ask someone at church. Are they the problem, Joe? They sound like they’re the conscience of America.

And others believe that the government putting something into ones body against one’s will is wrong.

Joe wanted a photo-op for the 9/11 anniversary.

Sen. Kennedy says President Biden’s ‘poll numbers are going down like a fat guy on a seesaw’
Hospitals are literally SUFFOCATING patients with plastic bags; AIR CARGO will be halted this winter due to collapsing airplane parts supply chain
Crowd surrounds, beats man to death after he allegedly tried to hit people with his vehicle
Whitlock: Katie Couric’s white lies kill black people
The Biden White House Will Pay for Playing Inflation Games