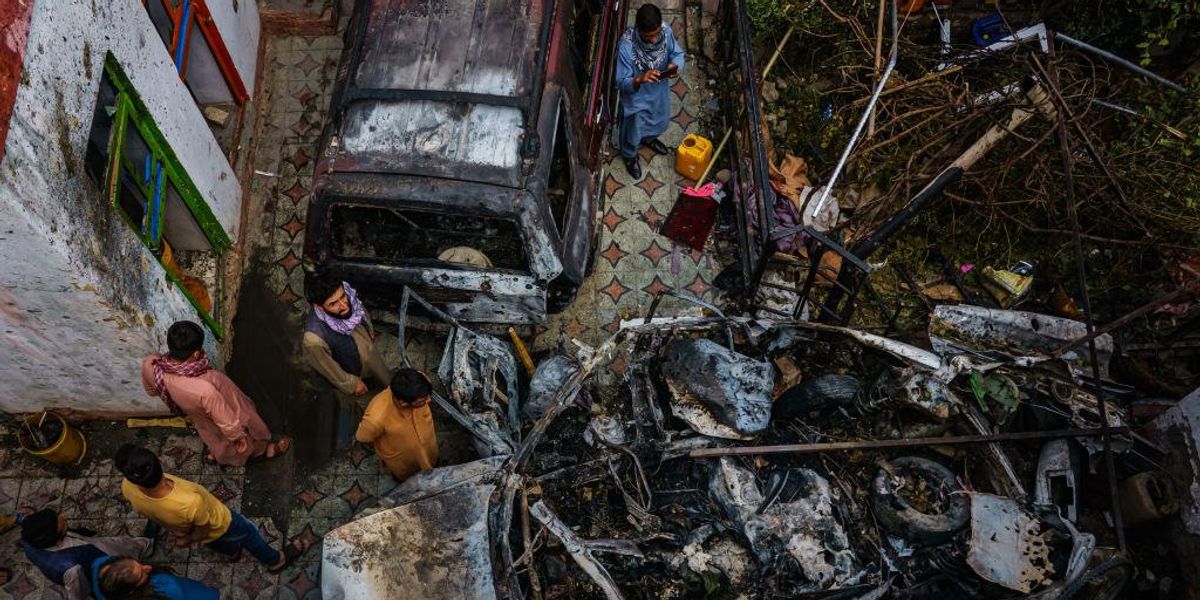 A United States military airstrike against a suspected terrorist in Afghanistan may have actually killed an innocent man who worked for a U.S. aid group in Kabul and his family, a new report claimed.

The U.S. launched an airstrike on Aug. 29, one day before the final American evacuation flights out of Kabul.

“We are confident we successfully hit the target,” Urban asserted. “Significant secondary explosions from the vehicle indicated the presence of a substantial amount of explosive material.”

“We are assessing the possibilities of civilian casualties, though we have no indications at this time,” he concluded. “We remain vigilant for potential future threats.”

On Sept. 1, Gen. Mark Milley, chairman of the Joint Chiefs of Staff, said, “We had very good intelligence that ISIS-K was preparing a specific-type vehicle at a specific-type location. We monitored that through various means, and all of the engagement criteria were being met. We went through the same level of rigor that we’ve done for years.”

“I don’t want to influence the outcome of an investigation — but at this point we think that the procedures were correctly followed and it was a righteous strike,” Milley stated.

During an Aug. 31 speech marking the end of nearly 20 years of U.S. military action in Afghanistan, President Joe Biden boasted of the Kabul airstrike and the drone attack in the Nangarhar Province of Afghanistan.

“We struck ISIS-K remotely, days after they murdered 13 of our servicemembers and dozens of innocent Afghans. And to ISIS-K: We are not done with you yet,” Biden stated in the White House State Dining Room.

However, a New York Times article disputed the Biden administration’s account of what actually happened during the Kabul airstrike, and contended that the airstrike killed an innocent family and not ISIS terrorists.

According to the report, drone operators began tracking a car belonging to Zemari Ahmadi, a white Toyota Corolla, which is reportedly the same type of vehicle that ISIS militants used to escape after launching rockets at the Kabul airport.

Newly released security camera footage shows Ahmadi filling containers with water at his employer’s office and loading them into his car. He was transporting colleagues to and from work, and they were seen carrying laptop computers.

“According to his relatives, as Mr. Ahmadi pulled into his courtyard, several of his children and his brothers’ children came out, excited to see him, and sat in the car as he backed it inside,” the Times reported.

The U.S. military launched a Hellfire missile fired from a Reaper drone at the vehicle, believing that it was being packed with explosives for an attack on the airport.

“At first I thought it was the Taliban,” Samia Ahmadi, Ahmadi’s daughter who was inside the family’s home when the missile attack occurred, told the New York Times. “But the Americans themselves did it.”

“I saw the whole scene,” Samia Ahmadi said. “There were burnt pieces of flesh everywhere.”

Samia’s fiancé, Ahmad Naser, a former army officer and contractor with the U.S. military, was allegedly among the 10 people killed in the drone strike.

The Pentagon claimed there were secondary explosions from the airstrike when explosive materials in the car burst into flames. However, the New York Times disputes that assertion.

“But an examination of the scene of the strike, conducted by the Times visual investigations team and a Times reporter the morning afterward, and followed up with a second visit four days later, found no evidence of a second, more powerful explosion,” the report declared.

Three weapons experts told the NYT that the small crater underneath the car was consistent with a Hellfire missile.

Weapons experts who reviewed photos and videos from the scene could not find evidence of the multiple, large-scale… https://t.co/cHb8QdZsJd

Zemari Ahmadi, who is believed to be the target of the drone strike, worked for 14 years as a technical engineer in Afghanistan for the California-based non-governmental charity organization Nutrition and Education International, which helps feed hungry Afghans.

Steven Kwon, the president of NEI, said Ahmadi “was well respected by his colleagues and compassionate towards the poor and needy,” and that he had recently “prepared and delivered soy-based meals to hungry women and children at local refugee camps in Kabul.”

The charity reportedly applied for him to move to the U.S. as a refugee.

Ahmadi was a 14-year employee of Nutrition & Education International, a U.S. NGO that fights malnutrition. He helpe… https://t.co/nF4MV9uYMk

The drone strike in Kabul happened three days after the suicide bomb attack at the Kabul airport that killed 13 U.S. service members and 169 Afghans.

Pentagon press secretary John Kirby doubled down the assertion that the airstrike eliminated an “imminent threat.”

“U.S. Central Command continues to assess the results of the airstrike in Kabul on Aug. 29. We won’t get ahead of that assessment,” Kirby said. “However, as we have said, no other military works harder than we do to prevent civilian casualties.”

“Additionally, as Chairman Milley said, the strike was based on good intelligence, and we still believe that it prevented an imminent threat to the airport and to our men and women that were still serving at the airport,” he added.