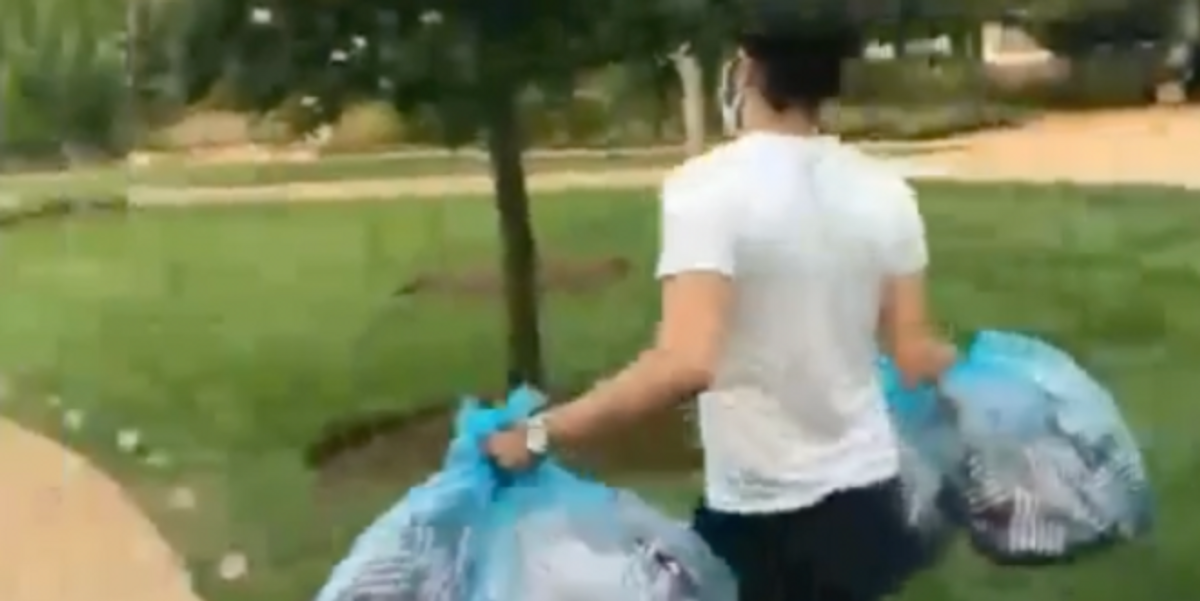 A student senator at Washington University in St. Louis was caught red-handed removing American flags from a 9/11 memorial and stuffing them in trash bags at around 6 a.m. on Sept. 11.

In a video posted by Young Americans for Freedom, the student is seen removing American flags from the memorial dedicated to the 20th anniversary of 9/11 on the lawn of the university and shoving them in at least five trash bags. There were 2,977 flags placed on Mudd Field, representing each 9/11 victim murdered at the World Trade Center, the Pentagon, and on United Flight 93. The memorial is part of YAF’s 9/11: Never Forget Project.

WOW: A student senator at @WUSTL was caught on video throwing away 2,977 American flags from conservative students’… https://t.co/0UtCGpiNK3

YAF identified the student as Fadel Alkilani, who is the vice president of finance for the student union.

Alkilani allegedly said, “I did not violate any university or legal policy. Now go away.”

Nathaniel Hope, a member of the WU College Republicans who filmed the video, claimed Alkilani showed “no remorse.”

It appears that Alkilani deleted his Twitter account, where he previously attempted to justify the desecration of the tribute to the 9/11 victims as a “protest against American imperialism and the 900,000 lives lost as a result of post 9/11 war.”

He did gripe about being condemned for removing the American flags from the 9/11 memorial on Instagram.

“Republicans attacking me in the replies,” Alkilani wrote on his Instagram, referring to a post from Washington University in St. Louis about the 9/11 memorial.

“Republicans are coming for me for real,” he said in another Instagram story.

Alkilani attempted to defend his actions, calling it a “flag relocation incident.” He claims that he had “no intention of removing the flags from the Mudd Field area.” The student senator alleged that he planned on leaving the American flags in trash bags on the field along with “various statistics explaining the human cost of 9/11 in the past 20 years.”

Students said Alkilani also tried to destroy the memorial on Friday night, but was instructed to stop by campus police, according to Fox News.

“We were disappointed to learn about the disruption to the 9/11 display on Mudd Field,” the statement read. “We condemn the interference with the expression of support by the College Republicans for the victims of the national tragedy that took place 20 years ago today.”

College Republicans president junior Nick Rodriguez said that Alkilani “made a mockery of one of the most somber days in American history,” and should be disciplined.

“At minimum, I believe he should be removed from both SU and his [resident advisor] position, as what does it say to be a top American institution, and have yourself represented by a student leader who has no respect for property, campus traditions or the remembrance of thousands of lost lives,” Rodriguez said in a statement. “Today is about remembering the tragedy, 20 years ago to the day, not to make a political statement. Any reason he can conjure to remove the flags I find ludicrous.”

Washington University in St. Louis officials have declined to say whether Alkilani would be disciplined.

“It’s stunning that someone would vandalize a memorial to the victims of the September 11th attacks, but it also underscores why we do this every year—to ensure that the innocent lives taken that day are never forgotten,” MSU YAF chairman Charlie Jones said.