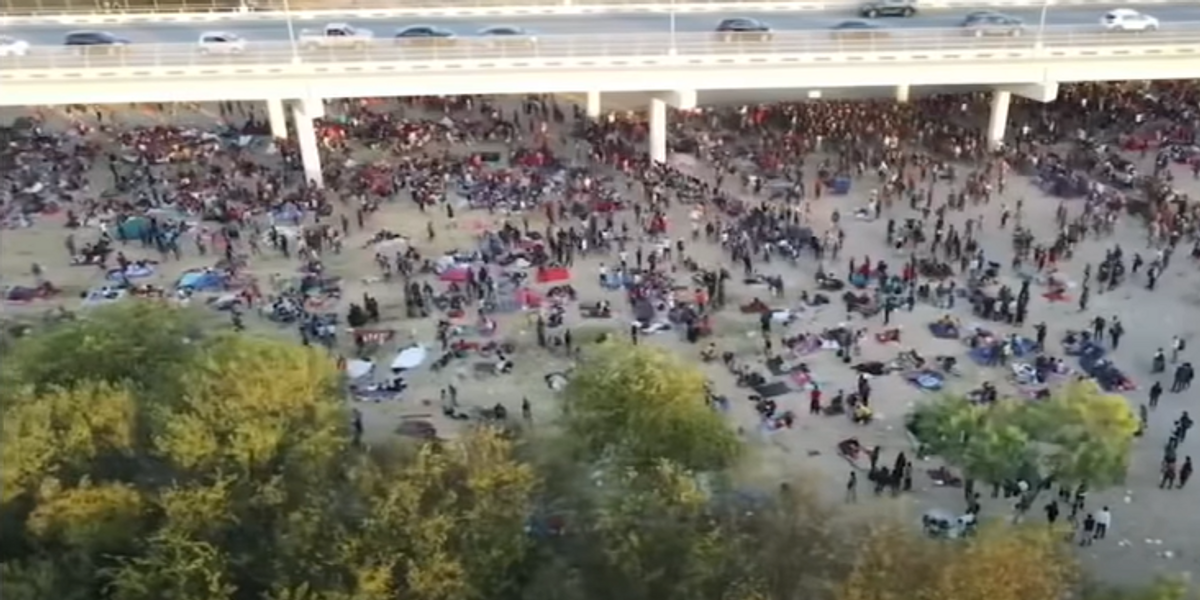 The Federal Aviation Administration authorized a flight restriction at the U.S. southern border shortly after images of thousands of migrants taken by a Fox News drone went viral.

“Our drone is back over the international bridge in Del Rio, TX,” the popular tweet read. “Per source, the number of migrants waiting to be processed has now swelled to approx 8,200. It was 4,000 yesterday AM. Doubled in one day. BP overwhelmed, & I’m told situation is ‘out of control.'”

BREAKING: Our drone is back over the international bridge in Del Rio, TX. Per source, the number of migrants waitin… https://t.co/wJCWABa6Al

However, less than 12 hours later, Melugin reported that the FAA had implemented a two-week flight restriction in the area where thousands of illegal immigrants were congregating.

“We’ve learned that the FAA just implemented a two week TFR (Temporary Flight Restrictions) over the international bridge in Del Rio, TX, meaning we can no longer fly our FOX drone over it to show images of the thousands of migrants,” the reporter stated.

Melugin said the FAA instituted the flight restriction because of a “special security reason.”

Melugin noted, “Fox News has been covering the border nonstop for almost 7 months now, we use the drone constantly, and it has never been an issue.”

Melugin appeared on “Tucker Carlson Tonight,” where he said, “It has never been an issue. All of a sudden, the last 24 hours, we start showing these images at this bridge and a TFR goes up [and] we can no longer fly.”

He told host Tucker Carlson, “Unfortunately for those agents on the ground, they are completely overwhelmed. They need some serious help right now, and hopefully, they get it from the federal government.”

Melguin said the throng of migrants swelled to over 10,000 at the Del Rio International Bridge.

“The Border Patrol is increasing its manpower in the Del Rio Sector and coordinating efforts within DHS and other relevant federal, state and local partners to immediately address the current level of migrant encounters and to facilitate a safe, humane and orderly process,” CBP said in a statement. “To prevent injuries from heat-related illness, the shaded area underneath Del Rio International Bridge is serving as a temporary staging site while migrants wait to be taken into USBP custody.”

“Drinking water, towels, and portable toilets have been delivered for migrants to use while they await to be transported to a facility,” CBP said.

Sen. Ted Cruz (R-Texas) confirmed the large number of illegal immigrants at the border bridge in a post on Twitter, which he described as a “Biden Border Crisis.”

“10,503 illegal aliens are under this bridge tonight because Joe Biden made a political decision to cancel deportation flights to Haiti,” Cruz wrote. “The Border Patrol is over capacity. It’s indefensible, it’s inhuman, and it was entirely caused by Biden & Harris.”

Cruz posted a video of the massive crowd under the bridge, where he blamed the “man-made crisis” on the Biden administration.

10,503 illegal aliens are under this bridge tonight because Joe Biden made a political decision to cancel deportati… https://t.co/PfSFn9nJnY

Cruz called the flood of migrants at the border “the most horrific thing I’ve ever seen” during an appearance on “Hannity.”

“It is packed in, it is a mass of humanity and it is, the scope of it, until you see it, they take your breath away because it just goes on and on and on. Infants, little children, people struggling enormously,” Cruz told host Sean Hannity.

“Eight days ago on Sept. 8, under that same bridge, there were between 700 and a thousand people. That is what was coming a day, about a thousand, sometimes 1,100, but it would range between 700 and 1,100,” Cruz said. “Then, eight days ago on Sept. 8, the Biden administration made a political decision. They announced that they were no longer going to fly deportation flights back to Haiti.”

Cruz claimed that “85% of the people under there are from Haiti.”

Regarding the FAA flight restriction near the bridge in Texas, Cruz said, “Really is ridiculous, I’ve never seen anything like that.”

“The drone footage started this morning and people across the country were horrified, and I guess the political operatives at the Biden White House saw that and decided the last thing they want is Fox News actually reporting on what’s happening down here,” Cruz surmised.

“So, now the FAA is saying please, no journalists allowed,” the Texas Republican added. “As you know, they did the same thing in the Donna tent facility in the Rio Grande Valley, where they wouldn’t allow Fox News to come in when I brought 19 senators to the Rio Grande Valley, I had to go in with my cell phone and photograph and take videos.”

Cruz addressed the issue of illegal immigrants, who may be COVID-positive, crossing the border.

“Joe Biden and Kamala Harris are absolute hypocrites,” Cruz declared. “Those 10,000 people there, do you know how many Border Patrol has tested? Zero. Not a one. They don’t have the capacity to do that.”