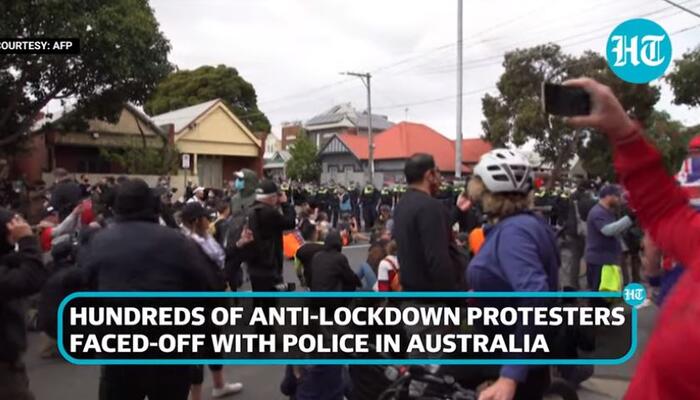 The New York Times has finally discovered that Australia has become a focus of criticism for its heavy-handed, futile fight to eliminate Covid: “Fight Against Covid Rewrites Australia’s Idea of Freedom – Half the country is locked down, but most are willing to sacrifice in pursuit of a freedom from fear.”

Yet Sydney bureau chief Damien Cave skipped many of the horrific deals emanating from “Fortress Australia,” a country whose imposition of authoritarian emergency restrictions in the name of total elimination of Covid (an impossible goal) has meant a draconian squelching of civil liberties. Some even argue that Australia doesn’t currently qualify as a liberal democracy.

Cave’s Friday piece mentioned a few of Australia’s violations against free society, but skipped egregious ones that would have surely garnered more attention if done in the name of some right-wing movement. He skipped the shooting of 15 rescue dogs to stop rescuers from picking up and rescuing the animals. and the superfluous pepper-spraying of an elderly lockdown protester, as well as the banning of news-gathering drones at protests. Not to mention keeping borders shut both in and out, surely anathema to all good liberals.

Cave tried to shore up the anti-liberty lockdown in the name of Australia’s impossible “zero-Covid” goal.

In the war against the Delta variant, few if any democracies have demanded as much of their people as Australia.

In the middle of the latest lockdowns, the police in Sydney gave hefty fines to three moms with strollers chatting in a park. Melbourne’s playgrounds were wrapped in police tape, and traveling from a state with Covid to one without — for the lucky few granted permission by the authorities — requires two-week stints in quarantine at a hotel or a remote former mining camp.

Cave posed a good question. “Is the sacrifice worth it?”

But Cave, whose reporting leans hard left, found himself once again taking the side of the authoritarians in Australia who disrupt daily life. Is it ironic that Australia was founded as a prison colony?

The world has come to see the country through that lens — through the actions of its blinkered politicians. To some American conservatives, Australia has even become the world’s largest prison – its citizens all but barred from leaving or returning to the country, with governments reflexively locking people in their homes at any sign of the virus.

But many Australians, while frustrated, see something else. Asked if the sacrifices have been worth it, they look to their neighbors, their community leaders, the millions of people waiting in long lines for vaccines and the tens of thousands of Australians who would have died of Covid without all the restrictions.

Their answer, with caveats or zeal, has generally been the same: “Yes, it is worth it,” or “Yes, we believe it will be.”

To understand why, I explored both Australias, the one with Covid, where roughly half the country’s population is trapped at home, and the one that has so far managed to keep it out. In both, I heard the same message — critics need to reimagine freedom not as the personal autonomy that Americans cherish but rather as a collective right with responsibilities. Epidemics are a test of society’s commitment to the greater good, they argue, and if any country has failed, it’s the United States, not Australia.