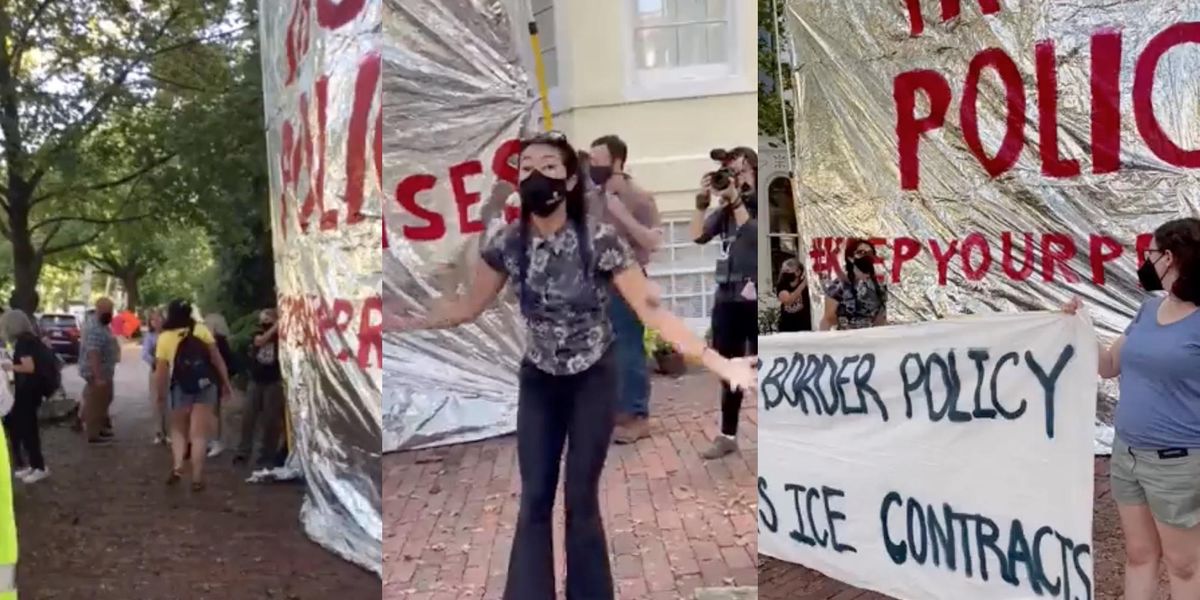 Illegal immigrant advocates targeted the home of Homeland Security Secretary Alejandro Mayorkas for a protest over the immigration policies they say are an extension of former President Donald Trump’s policies.

Videos posted to the social media account of “Never Again Action” showed protesters at Mayorkas’ home with a 30-foot banner accusing him of continuing policies of the previous administration.

“Never Again Action” describes itself as a group of “Jews, immigrants & allies” banding together to abolish the Department of Immigration and Customs Enforcement.

In another video, protesters appear to confront Mayorkas and his wife in front of their Washington, D.C., home.

“We talked briefly to the wife of DHS Secretary Mayorkas. She was very angry, and told us that this was her family home. And we really do understand that,” the account tweeted.

“But again, there are families being torn apart every day,” they added. “There are people being deported from their home forever, every day.”

In a statement issued by the organization they specifically point to the “Title 42 policy” under which the Trump administration deported many migrants seeking refugee status out of the country while their application was processed. Biden has also used the same rationale to deport Haitian migrants who showed up by the thousands in Del Rio, Texas, asking for refugee status.

The group also claimed to have shut down all access through the gates at the DHS offices by blocking them with their cars.

We can’t accept another day of Trump’s immigration policies.

The images from the border, the terror that immigran… https://t.co/Fz1VBxQgQd

On Friday, Mayorkas said that all the migrants who had been sheltering under a bridge in Del Rio had been removed, effectively ending the squalid encampment. Later on Sunday, he admitted under pressure from Chris Wallace of Fox News that many thousands of those migrants had not been deported to Haiti, but had been allowed into the United States.

Here’s more about the crisis at the border:

There Is Debate about Vaccine Mandates. Can We Actually Have the Debate?
Once Again, COVID-19 Hospitalizations Are Increasing in the North, Declining in the South
Virginia churches air Kamala Harris endorsement of Terry McAuliffe in apparent violation of federal law
McAuliffe: Female CEOs Won’t Go to a State That Bans Abortion
Biden’s $3.5 Trillion Failure