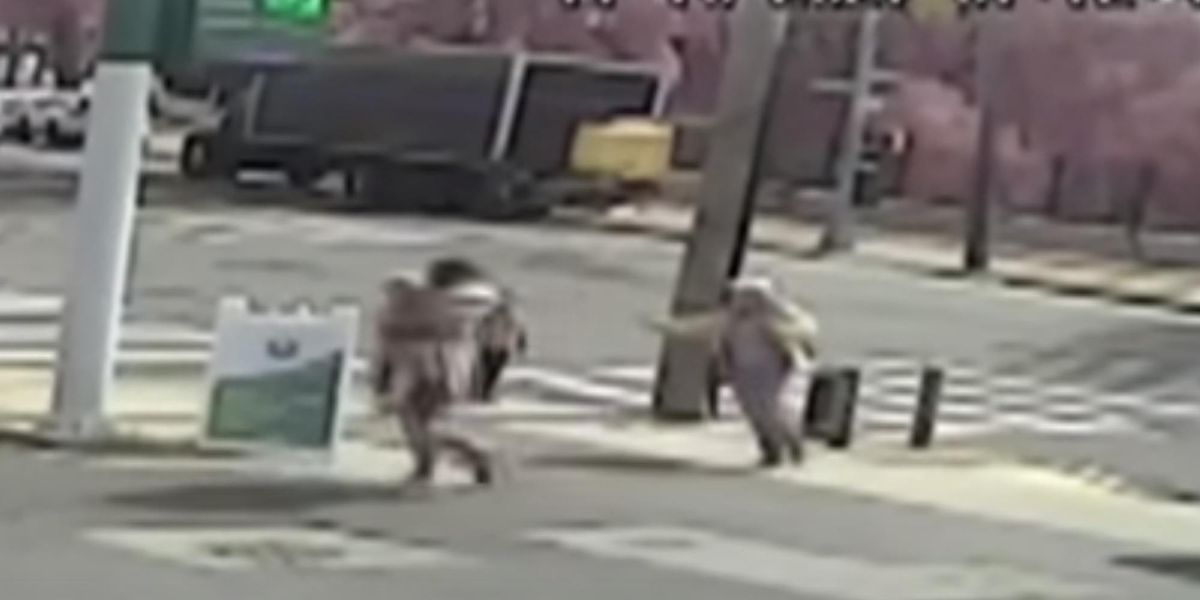 A startling surveillance video captured the moment a homeless man tried to kidnap a 3-year-old child from her grandmother in broad daylight as her other grandchildren looked on in horror.

The video shows the grandmother crossing the street with her three grandchildren in Throggs Neck in the Bronx on Monday.

That’s when a man, wrapped in a blanket, grabs the 3-year-old girl and runs off with her.

The grandmother panics and yells for help, after which bystanders can be seen walking after the man with the child.

Police say the homeless man then dropped the girl and fled the scene. According to WCBS-TV, many of the bystanders tried to find the man with an impromptu search party but were unable to locate him.

WCBS spoke to Fermin Bracero, an employee of a gas station nearby who witnessed the attempted kidnapping.

“It was like a movie, but this is real life. It was crazy,” said Bracero. “He must have gotten scared or something, dropped the girl, put the little girl down, and walked away like nothing.”

Police said that the man escaped on a scooter, then abandoned it and was caught while he was sleeping in a doorway of a nearby business called the Tosca Rooftop Garden Bar.

Police arrested 27-year-old Santiago Salcedo and charged him with kidnapping, unlawful imprisonment, and other charges. They said that Salcedo does not speak English and they are working with a translator to investigate the incident. The suspect has no criminal record in New York City

The mother of the children did not want to be identified but she told WCBS that they lived only about a mile away from the site of the incident. She said that the grandmother was walking the children home from the park.

The mother went on to say that although the family was traumatized by the incident, she was thankful for the onlookers who willing to help a stranger in distress.

“There was literally a couple of people who chased the guy and helped us with police, so I’d like to thank them,” the mother said.

The little girl was not injured.

Here’s the video of the attempted abduction:

PSYCHO-BIO-WARFARE: OMICRON hysteria is a virus of the mind with no basis in physical reality… it’s all a mind game to drive people to vax suicide
Doctors Warn of New Woke Accrediting Guidelines For Medical Schools
Can the Supreme Court Keep a Secret If <i>Roe</i> Is Going Down?
13-year-old accidentally shoots 5-year-old in the head while making video for social media on Thanksgiving, police say
BREAKING UPDATE: Parents of Michigan Shooter Flee After Being Charged with Involuntary Manslaughter