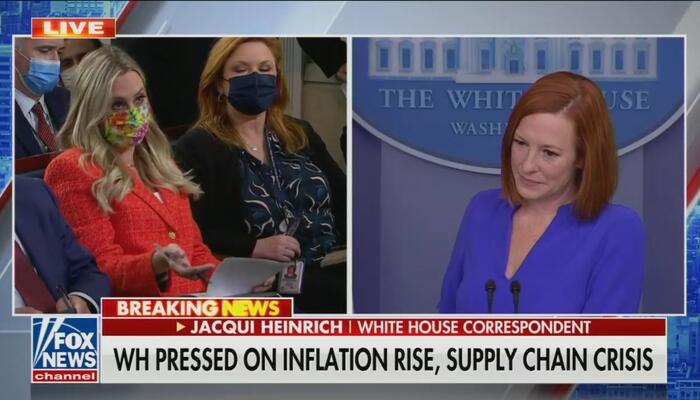 Heinrich began the first of two Klain questions by noting that Klain tweeted over “a message yesterday, not once but twice, that inflation and supply chain issues are ‘high class issues’” despite the fact that “some of the sharpest price increases…included products that every American buys: beef products, chicken, eggs, regular, unleaded gasoline, laundry equipment, furniture, clothing, the list goes on.”

“Why would Ron Klain tweet that and would you agree that’s a little bit tone deaf,” Heinrich added.

Psaki made clear that she was going to go the condescending route: “Do you think two tweets means more? Just curious. So, just for context, what — what Ron Klain retweeted was a tweet from the former Chairman of Economic Advisers, Jason Furman[.]”

She continued to defend Klain by informing Heinrich she instead needed to report the “full context which, I think, is important” in that things would be “much worse” “if the unemployment rate was still 10 percent”

After Psaki argued things were more expensive because the economy was such in great shape, Heinrich hit back and wondered if there were any plans for Klain to cut back on his Twitter use (click “expand”):

HEINRICH: [A]nd that’s a much more eloquent way of putting it than the — than the high class comment in that tweet. It’s not the first time that Ron Klain’s Twitter has drawn some sharp criticism. Is that something that the White House is addressing at all given this push back, this criticism?

PSAKI: Are we addressing the chief of staff’s Twitter habits —

PSAKI: — is not a top priority at this point in time. The chief of staff is out there speaking on his own accord to members of Congress, to the media frequently as any chief of staff does and I think it’s important also for anyone here to be able to tout points that they find interesting and that’s the purpose of public speech.

Also on the issue of supply chains, CBS News Radio’s Steven Portnoy wanted to know how the Biden administration expects the private sector to step up and increase its efforts to fix the backlog when “many workers…are already stressed out” and “overworked” with droves “resigning from their jobs” and saying “they’re burnt out.”

Predictably, Psaki didn’t have much to say other than going on about bringing businesses and labor groups together to ensure both sides have their priorities met. Totally earthshattering stuff.

In contrast, Newsmax’s John Gizzi piqued the interest of both reporters and Psaki with questions about Taiwan and whether Biden has spoken with Matthew McConaughey about running as a Democrat for governor of Texas (click “expand”):

GIZZI: First, so much has been in the news lately about Taiwan and the flights from China and the statements from President Xi essentially underscoring what his predecessors have said that Taiwan will be part of the motherland. Will the U.S. live up to the commitment of the Taiwan Relations Act of 1978 and send in U.S. forces if Taiwan is ever attacked?

PSAKI: Well, the U.S. commitment to Taiwan is rock solid and contributes to the maintenance of peace and stability across the Taiwan Strait and in the region. This is why we will continue to assist Taiwan in maintaining a sufficient self-defense capability. Our approach and our U.S. defense relationships, as you referenced, is guided by the Taiwan Relations Act and we will uphold the commitment under the act. We will continue to support Taiwan’s self-defense and we will continue to oppose any unilateral changes to the status quo. Our support for and defense relationship with Taiwan remains aligned against the current threat posed by the People’s Republic of China. I am not in position to comment on specific operations, engagements, or training, but I would like to highlight that our support for and defense relationship for Taiwan remains aligned.

GIZZI: Thank you. My other question is a political question. Going back to his days of senator and vice president, the President has worked sedulously as a party leader and Democrat.

PSAKI: Sedulously! Ed O’Keefe is very impressed with that word as am I.

GIZZI: Is he following the race for governor for Texas and has he called Matthew McConaughey and urged him to run for governor?

PSAKI: I can confirm there has been no calls to Matthew McConaughey from this office that I am aware of or tracking. Of course, the President sees his role as governing the country, leading the country, unifying the country. He is also the leader of the Democratic Party. He’s been in politics — involved in politics for quite sometime. Some might say he’s a pretty good retail politician so I can assure you he is following everything happening out there quite closely.

But over in the liberal column, your tax dollars were at work when PBS’s Yamiche Alcindor lobbied Psaki to have the federal government implement Covid testing and vaccine mandates for domestic flights:

I’m wondering if you could explain the American people why there isn’t proof of vaccination or testing required on domestic flights? Is the President getting briefed on that? Is there any sort of assessment on whether it will change. We’re hearing experts say that U.S. should follow what Canada’s doing, which is doing — taking those policies to their domestic flights.

Just as she did earlier in the briefing when Franco Ordoñez of taxpayer-funded NPR asked a more open-ended question, Psaki didn’t bite: “Again, we’re always looking at options for how we can keep more people safe in this country. I just don’t have a prediction of additional options at this point in time.”

WHO ‘deliberately’ skips naming new COVID variant with Greek letter spelled same as name of China’s president
Enjoying Autarky?
North Dakota farmer arrested in Ukraine, accused of trying to assassinate a gov’t official; his family says he is being railroaded to cover up other crimes
The Four Hundredth Anniversary of Thanksgiving
Dollar Tree to hike prices for first time ever as inflation soars and the supply chain continues to see disruptions