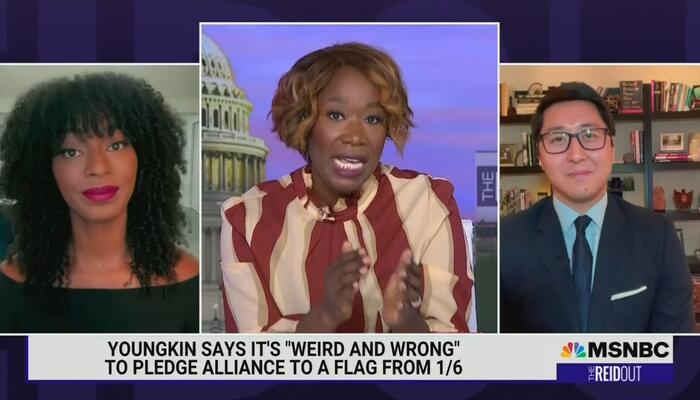 Folks, the liberal media have hit the panic button Virginia gubernatorial election with the chance Republican Glenn Youngkin could pull off the upset, so they’ve gone into overdrive to argue Youngkin’s an insurrectionist who cheered the January 6 riot and whose denunciations of said events were fake.

Such were the claims Thursday night on MSNBC’s The ReidOut as host Joy Reid and two liberal panelists flung one wild and venomous accusation after the next against the businessman.

Using a gathering in Richmond that included an American flag allegedly carried in D.C. on January 6 as a cudgel against Youngkin, Reid bragged that “[i]t is now the dogma of the Republican Party that the insurrection was good, it was great” even though Youngkin wasn’t there and slammed the stunt “weird and wrong.”

Reid then played a clip from the event and spent a few minutes doing what MSNBC does best: making Donald Trump the enter of their universe.

Eventually, Youngkin came back into focus as MSNBC political analyst and Democratic strategist Juanita Tolliver said Youngkin’s statement wasn’t genuine because “Youngkin is no different” than the furthest fringes of the spectrum.

Tolliver continued on, stating without evidence that “[h]e might not have been in the room, but these are words that he believes. This is stuff he said in the GOP primary in Virginia.”

Feeling free to lie about Youngkin, Reid went to her other panelist in former Republican flack-turned-This Town subject-turned-Democrat and all-around media leech Kurt Bardella and predicted Youngkin will backtrack so as not to lose “the freak vote” (click “expand”):

REID: I mean, you know, Kurt, you know, the thing about a god is that they are invisible unless — when they’re not in their golden idle form. So, when Trump is not in his gold form at CPAC, where he can see them, he’s invisible. And so, Mr. Youngkin may want to put out a little statement saying, well, that was “weird and wrong,” but he’s now probably got to like coil himself in a ball and wait for their invisible god to hit him, because he can — even without Twitter, if Trump were to come out and be like, eeef, Youngkin, he would panic because he needs those voters, right? He needs the freak vote. He needs the religion vote and he thinks he can also somehow get the regular, moderate, normal people vote. So where does he go from here? Can he — can he withstand that was weird and wrong, or is he eventually going to have to take the knee?

Bardella explained that Youngkin is merely one of many “right-wing, racist, authoritarian wannabes” who make up “the establishment Republican Party” and that he “[doesn’t] care what he said in that statement.”

As an aside, take note of how a conservative actually came out and denounced something they disliked from people on their side of the spectrum as opposed to remain silent, but the liberal media’s reaction was to deem it either disingenuous or insufficient.

Pretending like he still knows how to be a successful Republican, Bardella dictated what Youngkin should say about the rally attendees as well as those who were in Charlottesville in August 2017 and Washington D.C. on January 6, 2021 because, if not, he’s on par with those “domestic terrorists.”

After Bardella wrapped by insisting Youngkin and running mates Winsome Sears and Jason Miyares would rig the 2024 election for Republicans, Reid insisted that cockamamie bat guano was indeed fact:

And if y’all are in Virginia, and you don’t believe that, I have a big bridge to sell you. If Youngkin gets in, the pressure on him to steal the election and do whatever he can to steal it in 2024 will be enormous, and he will fold like a Romney.

MSNBC’s lies about Youngkin were made possible thanks to the endorsement of advertisers such as Applebee’s, Cadillac, and Sand’s. Follow the links to see their contact information at the MRC’s Conservatives Fight Back page.

To see the relevant MSNBC transcript from October 15, click here.

Breyer’s Botched Argument
Michigan high school mass killing suspect may have been armed with a gun during disciplinary meeting with parents, school officials
Former congresswoman says being pregnant has bolstered her pro-choice abortion views
Biden says fight against Omicron variant will not include ‘shutdowns or lockdowns’
Glenn Beck: Here’s how YOU can fix the Great Reset’s housing crisis