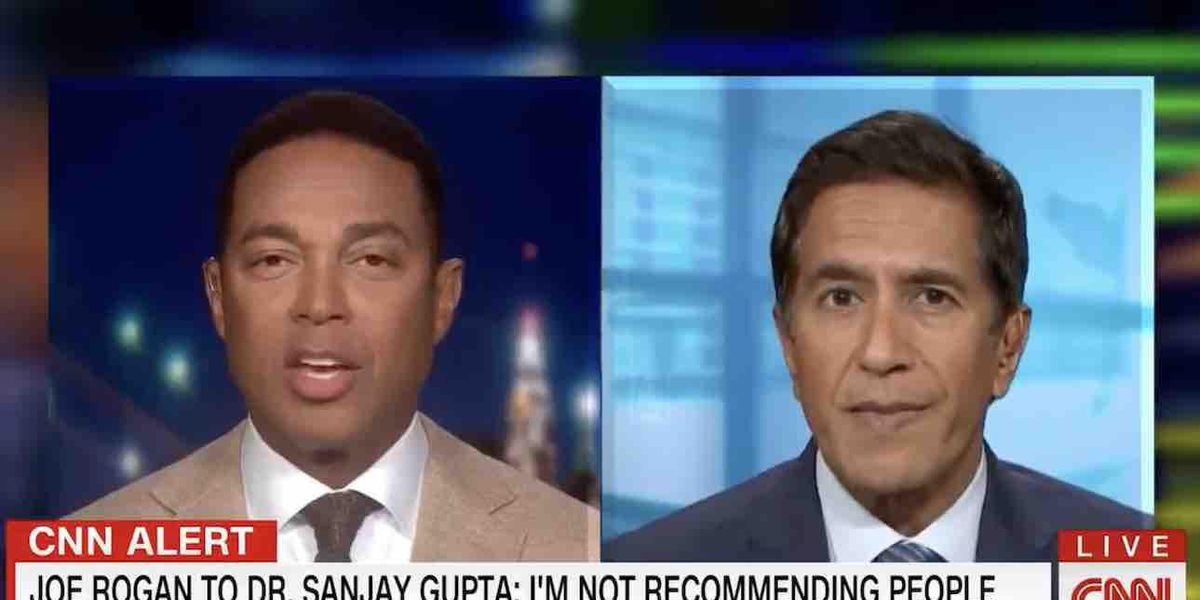 The video of podcaster Joe Rogan taking to task CNN’s Dr. Sanjay Gupta over his network’s “lie” that Rogan took “horse de-wormer” to battle his COVID-19 infection — when, in fact, his ivermectin was prescribed by a doctor — is pretty stunning to watch.

‘Yeah, they shouldn’t have said that’

“Do you think that that’s a problem that your news network lies?” Rogan asked Gupta. “First of all it was prescribed to me by a doctor.”

“Yeah, they shouldn’t have said that,” Gupta replied “If you got a human pill — because there were people that were taking the veterinary medication, and you’re not obviously; you got it from a doctor, so it shouldn’t be called that.”

Gupta then tried to change the subject, but Rogan wouldn’t let him off the hook just yet.

“Does it bother you that the news network you work for out and out lied?” Rogan asked him. “Just outright lied about me taking horse de-wormer?”

Gupta confessed again: “They shouldn’t have said that.”

“Why did they do that?” Rogan asked.

“You didn’t ask?” Rogan replied incredulously. “You’re the medical guy over there.”

“I didn’t ask,” Gupta responded contritely. “I should have asked before coming on your podcast.”

Wow! Could that mean we might actually be getting somewhere with embracing facts, ending spin, and conducting proper journalism?

Because Gupta appeared on Don Lemon’s CNN show later Wednesday, and the pair proceeded to completely gloss over the network’s assertion that Rogan took horse de-wormer and ignored the fact that Rogan got a doctor’s ivermectin prescription for human consumption.

Gupta replied, “That’s right. That’s correct. It is not approved for COVID. And, you’re right. I mean, the FDA even put out a statement … that said ‘you’re not a horse, you’re not a cow, stop taking this stuff'” in reference to ivermectin.

The doctor continued, saying “now I think what Joe’s point is” before Lemon cut him off — perhaps Gupta was about to bring up the fact that Rogan took ivermectin for humans. But we’ll never know.

“It’s been approved for humans but not necessarily for COVID, right?” Lemon said, failing to clarify that Rogan actually did take the proper prescription as opposed to the one for animals.

“That’s correct,” Gupta replied. “It’s been used for a parasitic disease for something called river blindness, and it’s been very effective for that. But, you know, just because it works for one thing doesn’t mean it works for something else. And there are still a few ongoing clinical trials around ivermectin. But for the most part, if you look at the data, there’s no evidence that it really works here.”

He continued saying that when Rogan “got sick, he took ivermectin.” Again, no mention that it was properly prescribed by a doctor. Gupta added that “he also took monoclonal antibodies, which is, you know, an infusion of these antibodies. So, he took both those things. It’s very likely it was the monoclonal antibodies that made him feel better so quickly.”

“I will talk to them,” @DrSanjayGupta told @JoeRogan after Gupta said on the podcast that it was wrong for CNN to d… https://t.co/41iCUZ4jE7

Spin, spin, and spin some more

But saying Rogan used horse de-wormer isn’t factual. When a human is medically prescribed ivermectin, it’s for humans, not horses or other animals. But CNN indeed downplayed that last month, as Anderson Cooper — on top of a headline reading, “Joe Rogan announces he has COVID; praises horse dewormer ivermectin” — said the drug is “more often used to de-worm horses.”

CNN’s chief media correspondent Brian Stelter echoed that spin: “But when you have a horse de-worming medication that’s discouraged by the government that actually causes some people in this crazed environment we’re in to actually want to try it, that’s the upside-down world we’re in with figures like Joe Rogan.”

At least the physician on the panel, Dr. Leana Wen, admitted that ivermectin can be prescribed for humans — but again, no clarifying words that Rogan received the medication properly.

All of which might explain why Rogan also told Gupta during his podcast, “My point is you’re working for a news organization. If they’re lying about a comedian taking horse medication, what are they telling us about Russia? What are they telling us about Syria? Do you understand that that’s why people get concerned about the veracity of the news?”

The Kruiser Kabana Episode 162: COVID Nazis Can’t Ruin My Plans Anymore
California Faces Statewide Mandatory Water Restrictions as Drought Worsens
Woke ‘Saved by the Bell’ Reboot: ‘Queer and Trans Joy Is Resistance’
George Clooney’s Good Samaritan Parable (Without a Good Samaritan)
There Is a Vaccine Mandate Debate Inside the NIH That You Can Watch on Wednesday