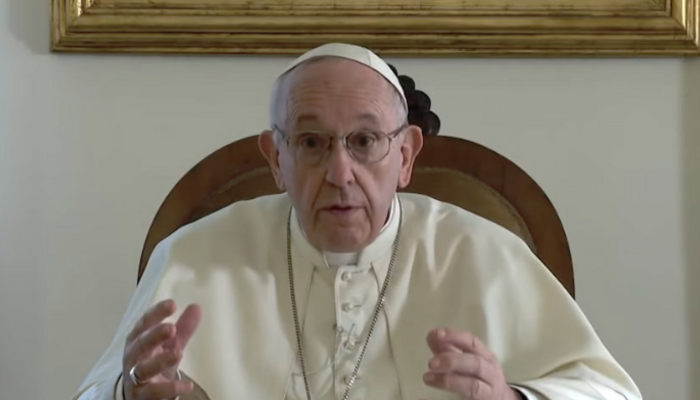 In a discussion about equality, Pope Francis called for more censorship online.

Pope Francis was discussing how he believes the public views him as a “pest” for defending the poor.

“Thinking about these situations (of exclusion and inequality), I make a pest of myself with my questions. And I go on asking. And I ask everyone in the name of God,” the pope said from the Vatican while participating in the World Meeting of Popular Movements online.

He then discussed social media and “hate speech” online, calling on Big Tech platforms to take an active stance in removing such speech from the internet.

“This system, with its relentless logic of profit, is escaping all human control. It is time to slow the locomotive down, an out-of-control locomotive hurtling towards the abyss. There is still time,” he said. “And so, I persist in my pestering.”

The pope added that restricting what sort of content appears online is a human rights issue and must be used to encourage “human fraternity and empathy.”

“In the name of God, I ask the technology giants to stop exploiting human weakness, people’s vulnerability, for the sake of profits without caring about the spread of hate speech, grooming, fake news, conspiracy theories, and political manipulation.

In the name of God, I ask the telecommunications giants to ease access to educational material and connectivity for teachers via the internet so that poor children can be educated even under quarantine.

In the name of God, I ask the media to stop the logic of post-truth, disinformation, defamation, slander and the unhealthy attraction to dirt and scandal, and to contribute to human fraternity and empathy with those who are most deeply damaged.”

The pope made similar statements calling on social media platforms to monitor the speech it hosts in 2019, and said the freedoms must be balanced “with the common good of society.”

“Freedom and the protection of privacy are valuable goods that need to be balanced with the common good of society,” he said at the time. “Authorities must be able to act effectively, using appropriate legislative and executive measures that fully respect the rule of law and due process, in order to counter criminal activities that harm the life and dignity of minors.”

Safety, he said, must be prioritized above all else.

“It will not be possible to guarantee the safety of minors in the digital world without the full involvement of companies in this sector and without a full awareness of the moral and social repercussions of their management and functioning,” he added. “Such companies are bound not only to respect the law, but also to be concerned with the direction taken by the technological and social developments which they produce and promote, since such developments are far ahead of the laws that would seek to regulate them.”