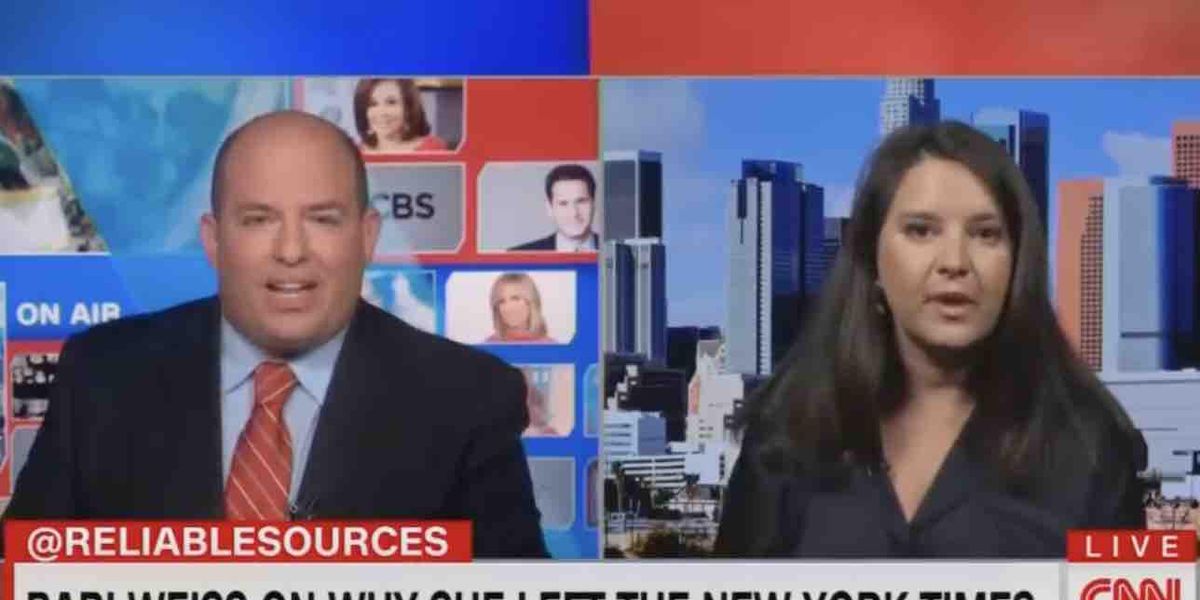 But Weiss was more than equal to the task — and turned the tables on Stelter by blasting his own network.

During the latest edition of “Reliable Sources,” Stelter asked Weiss about the statement listed in her “Common Sense” newsletter on the SubStack platform that “the world has gone mad. Science is at the mercy of politics. Identity trumps ideas. In the name of progress, art is erased and history is rewritten. Obvious truths are dangerous to say out loud.”

“So, in what ways has the world gone mad?” Stelter asked Weiss with a slight giggle.

But Weiss was in no laughing mood:

Stelter interrupted Weiss, pushing back on her claim that debate and discussion is “not allowed” and asked who is “stopping the conversation. Who are they?”

Weiss was only too happy to answer what turned out to be a softball challenge — and dug into CNN to boot: “People that work at networks like, frankly, like the one I’m speaking on right now, who try and claim that it was racist to investigate the lab-leak theory.”

Stelter tried to counter by saying journalists aren’t being prevented from discussing or questioning any of the issues Weiss brought up, but she offered that the consequences for doing so in this cancel culture era have become grave and widespread.

“You and I both know — and it would be delusional to claim otherwise — that touching your finger to an increasing number of subjects that have been deemed third rail by the mainstream institutions and increasingly by some of the tech companies will lead to reputational damage, perhaps you losing your job, your children sometimes being demonized as well, and so what happens is a kind of an internal self censorship,” Weiss replied. “This is something that I saw over and over again when I was at the New York Times.”

Substack’s @BariWeiss brings common sense to @BrianStelter: “When you have” NYT reporter talking abt how “pursuing… https://t.co/n6q3J0gCGn

The New York Post broke the story weeks before the 2020 election regarding the Biden family’s allegedly sketchy overseas business dealings that were detailed on a laptop formerly belonging to Hunter Biden allegedly abandoned at a Delaware computer repair shop.

With that Twitter locked the Post’s account and went to great lengths to block users from sharing the story, linking to it in direct messages, and even suspending well-known accounts for attempting the share the Post’s piece.

CNN only began covering the federal investigation into the Hunter Biden laptop story in December 2020 — well after the presidential election.

Then when Politico admitted the veracity of key Hunter Biden emails last month, the Post mockingly replied “Color us shocked!” in a scathing editorial ripping the mainstream media for burying the story and pushing the false narrative that the laptop scandal was Russian disinformation.

And there’s little doubt that with few exceptions cancel culture has gained a foothold in regard to who gets to stick around and maintain an online voice — and even keep a career intact.