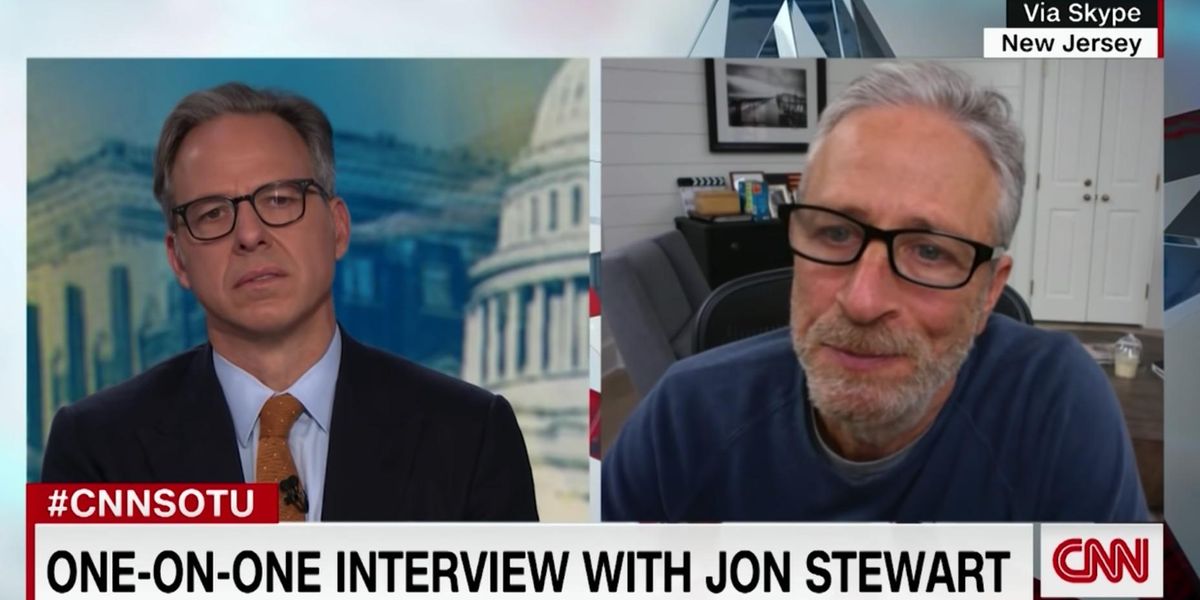 Toward the beginning of the interview, Stewart communicated his sense of optimism about the state of America. But Tapper regurgitated trite stereotypes of Trump voters who believe Trump won the 2020 election.

“This is not only not going away, this misinformation, big lie, flirtation with autocracy. It’s getting worse,” Tapper said.

“That’s the worst bedtime story I have ever heard, ever,” Stewart shot back.

Completely missing Stewart’s point, Tapper continued to blame Trump for current state of American politics. Tapper even suggested that Trump is continuing to identify the “weak points in the guardrails of democracy” by endorsing political candidates who affirm the “big lie.” The phrase “big lie” refers to a Nazi propaganda technique that helped facilitate the Holocaust. Democrats and media members, however, have applied the phrase to Trump’s insistence that he won the 2020 election.

Focusing on Trump is a bad idea, Stewart responded. Instead, Stewart said the real threat to American democracy is “the idea that power is its own reward” and granting “amnesty to people that are doing things that we would prefer, even if that means that they’re slightly undemocratic.”

“I think we make a mistake focusing this all on Donald Trump, as though he’s, I don’t know, Magneto, and some incredible supervillain that has changed the very nature and temperature of the United States,” Stewart said.

“Like, he’s just been an effective vessel. But, again, like, he’s not singing new songs,” he continued. “I think it’s a mistake to focus it all on this one individual, and not to focus it more on the idea that power is its own reward, whether it be in the financial industry or in government. Like, power doesn’t cede itself.”

Stewart added, “I don’t know that autocracy is purely the domain of Donald Trump. I think that we all have a bit of a tendency to grant amnesty to people that are doing things that we would prefer, even if that means that they’re slightly undemocratic.”

Regarding President Joe Biden, Stewart said he doesn’t think Biden — or anyone in a position of national leadership, for that matter — is leading in a manner the current moment demands.

It’s Morning in America!: The Great Hope of <em>Dobbs</em> Is a Beautiful Challenge to Us All
Soulless Joy, Sidekick Mystal Become Unglued Over SCOTUS Abortion Case
Stephen Colbert Stands Up For Authoritarianism In Roe v. Wade Rant
China Does It Again – Sends 27 Aircraft Into Taiwan’s Air Defense Zone
Some Questions for Blake Masters