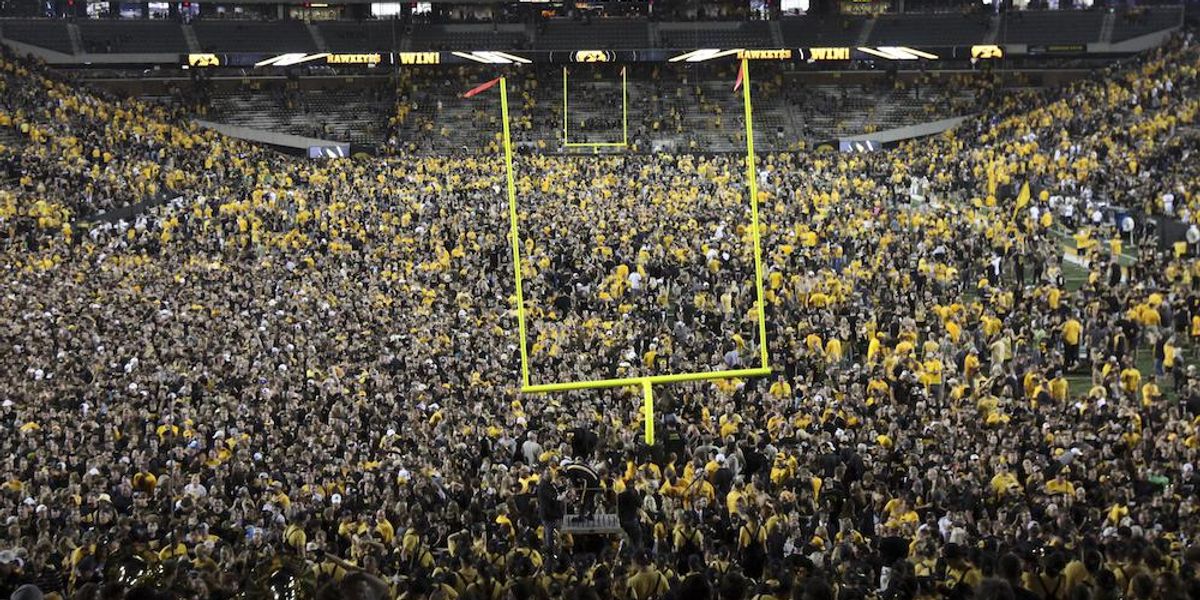 Remember when America was celebrating the beginning of the 2021 college football season and the expert-class naysayers were warning the world that the fan-filled games risked being COVID super-spreader events? Politico noted last week a few of the headlines (including its own) blaring the warnings that packed stadiums posed a danger:

And Dr. Anthony Fauci famously told MCNBC’s Joy Reid in early September that images of packed college football stadiums were a serious worry for him.

Reid asked Fauci his thoughts about the images of full stadiums following the first weekend of the 2021 season: “What was your immediate thought when you saw all of those fans packed into stadiums Texas, Wisconsin, and elsewhere? As soon as I saw it, I thought, ‘COVID’s about to have a feast.’ What did you think?”

“People would like to say, ‘We’re done with COVID,’ but COVID is not done with us. And that’s really the problem — that you can’t wish it away,” he continued. “When you have the numbers of infections that you just mentioned a moment ago, I mean, I would hope that most of the people in that stadium were vaccinated — and even if they were, the close, congregate setting — they should have been wearing masks.”

“Certainly those who are unvaccinated should be wearing masks, and I didn’t see any of that in the picture that I saw about that, which is really unfortunate, because then you lead to outbreak, lead to hospitalizations, which get to the numbers that you were talking about,” Fauci added.

Reid and Fauci also highlighted how shouting crowds can really be a threat to spread the virus.

“You would imagine that when you were in a sports arena where everyone is screaming and yelling that if, in fact, anybody — and I would be very surprised if that were not the case — if anyone in that crowd is infected, they’re spreading the virus around,” Fauci said.

But it turns out those super-spreader events college football games were supposed to become never materialized.

And it was NBC’s “Today” that pointed it out over the weekend, the Newsbusters noted.

What did ‘Today’ say?

NBC reporter Shaquille Brewster reported on Saturday’s episode of “Today” that experts have found that large, unmasked crowds in open-air stadiums this season have turned out to not be super-spreader events.

“For weeks crowds in the tens of thousands — mostly unmasked — have sat side by side now cheering on their teams at the halfway point of the season,” Brewster said. “All while doctors warned of games becoming potential super spread events. A frightening prospect at the time with hospitals already on the brink.”

Brewster’s report then flashed back to a clip of the Reid-Fauci interview where the COVID expert agreed with the MSNBC host’s belief that COVID was about to “feast” on the football fans, which the reporter followed with a stark reality check.

“But it never happened,” he said. “COVID hospitalizations, and deaths now all down nationwide.”

“Cases are now in steep decline in every college football state across the South, including Florida where hospitalizations fell 64% last month,” Brewster continued. “Even as some 90,000 fans packed the Gator stadium.

Dr. Cindy Prins, an epidemiologist at the University of Florida, told “Today” that despite how “scary” the crowded stadiums might look on TV, “in reality, I think the exposure isn’t as great as we think it is.”

Why are experts suddenly less concerned? According to Brewster, doctors have credited the fact that games are in open-air venues, vaccinations have gone up, and many people have natural immunity.

Prins added that, though experts prefer to learn by studying, this time around they learned by “doing, as well.”

In another piece for NBC News, Prins told Brewster that people need to make the decision about whether to go to games for themselves.

“I don’t see it as a high-risk activity,” she said. “I see it as something that is fairly low-risk.”