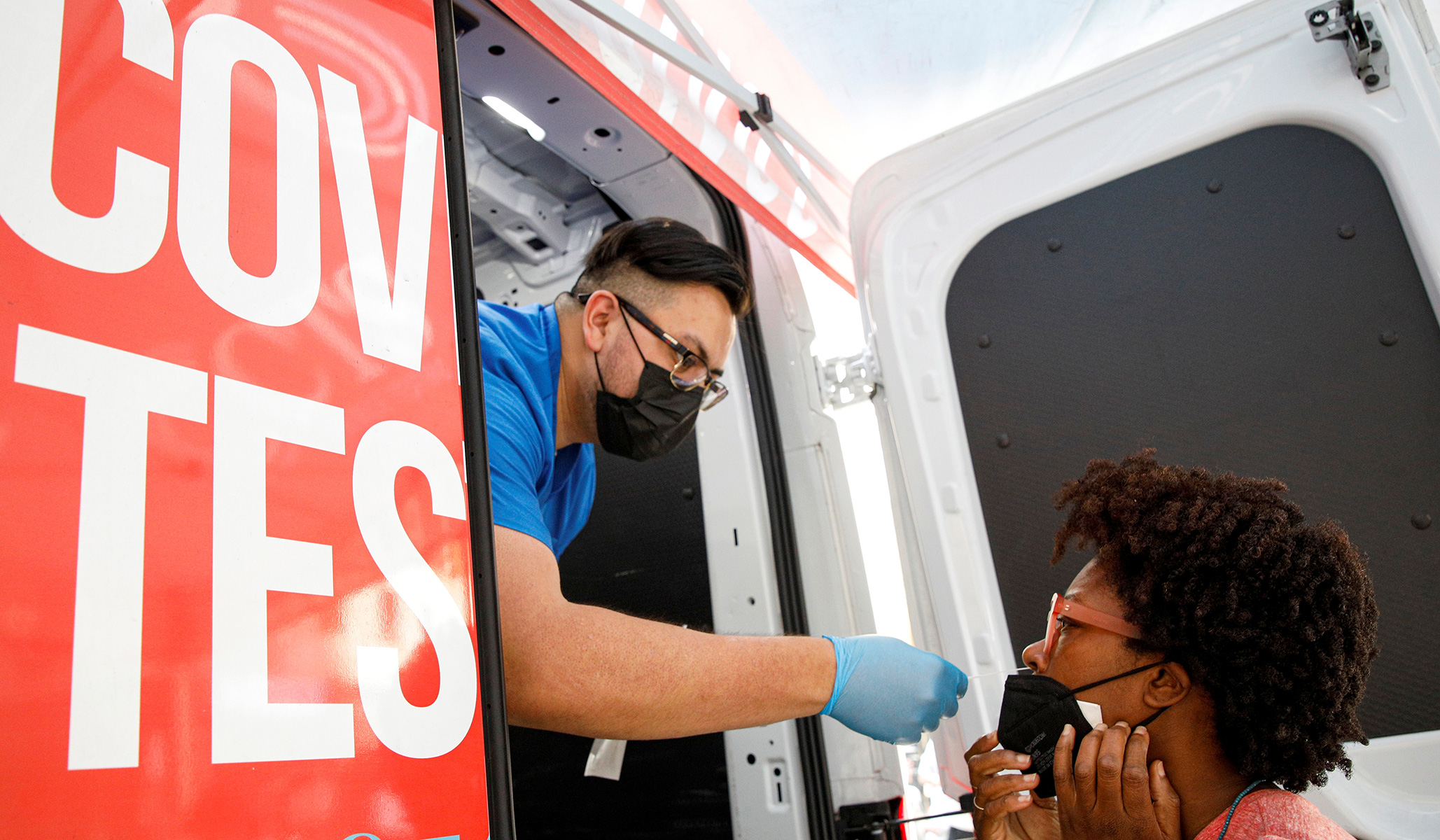 On the menu today: a big roundup that examines the data and raises the possibility we’ve wanted to hear since March 2020. Could this last wave with the Delta variant be the last significant wave of COVID-19 cases, hospitalizations, and deaths in the U.S.? Is the coronavirus pandemic now, if not quite over, close to being over?

Is the COVID-19 Pandemic Now Finally in the Rear-View Mirror?

As recently as mid September — 21 months after the first cases of COVID-19 in the U.S. — Americans looked at the more than 150,000 diagnosed new cases of COVID-19 per day and wondered if the pandemic’s grip on our society would ever loosen. Even worse, the seven-day moving average of daily deaths hit 1,829 — far from the worst peak in January, at 3,646, but still really high, particularly for a country that had rolled out vaccinations in December.

If you look at the New York Times’ “Hot Spots” map, there’s a broad swath of light-yellow counties from Miami to the middle of Texas, up into Missouri, and across to North Carolina. The virus crashed through the southeastern U.S. in late summer, and now the majority of people in that region either have acquired natural immunity from infection, are vaccinated, both, or dodged the virus as it was passing through. There’s been an inversion, as the darkest spots on the map now start in Montana, Oregon, and Nevada, stretch over the Rockies to Minnesota, slip through Wisconsin and Michigan, and settle into a patch of orange running through the counties of Ohio, western Pennsylvania, and western New York. Again, these are cases, and a person who tests positive is not necessarily feeling sick. The map of hospitalizations per 100,000 people in each county shows light colors from coast to coast, although there are patches of real trouble in Montana, Wyoming, and parts of West Virginia.

As I’ve noted for the past three weeks, hospitalizations for COVID-19 are increasing in the northern states and decreasing in the southern states. Thankfully, an increasing hospitalization rate does not automatically mean a hospital is in danger of reaching capacity. In fact right now, according to data from the Department of Health and Human Services, just 7.62 percent of the nation’s inpatient hospital beds have patients who are being treated for COVID-19. Right now, Montana is the highest, with 15.58 percent of hospital beds in the state treating a COVID-19 patient — but even that state, overall, is using just 74 percent of its hospital beds. Nationally, a bit more than 75 percent of hospital beds are in use.

This doesn’t mean that no hospital in the U.S. is in danger of running out of space, however:

Minnesota Gov. Tim Walz and health officials on Friday announced that the state would shift some patients to long-term care facilities to relieve the strain on hospitals amid a surge in COVID-19 infections, hospitalizations and deaths driven by the highly contagious delta version of the coronavirus.

About 64.4 percent of all Minnesota residents have received at least one dose of a COVID vaccine, which puts the state around the middle of the pack nationally. Keep in mind that this figure includes children ages eleven and under who cannot get vaccinated yet.

A lot of people are sharing this heartbreaking and deeply reported story from the Washington Post about a 69-year-old retired gas-plant operator in Stillwater, Okla., who developed complications from COVID-19 and needed an Intensive Care Unit bed, but then ultimately died after nurses could not find an ICU that had space to accept him. That story, however, describes the desperate situation at the August peak; it is worth noting that Oklahoma ranks twelfth in the country for hospital beds per capita, as of 2018, but 15th in ICU beds per capita.

As seen by hospitals feeling the strain in parts of Vermont and Massachusetts, even a high vaccination rate among citizens cannot guarantee plenty of room in a hospital when the Delta variant passes through. Think about how many hospital beds are in your community, and then think about how many senior citizens, and/or individuals who are immunocompromised or who have comorbidities are in your community. Even if just 10 percent of the individuals in those demographics all need a hospital at once, that can create a lot of strain on a hospital system.

And as the recent example of Colin Powell’s passing demonstrated, a fully vaccinated 84-year-old man who is fighting multiple myeloma — a type of cancer that forms in white blood cells and compromises the immune system — can succumb to COVID-19. Octogenarians who are fighting cancer are at higher risk of death, period. As Michael Brendan Dougherty observed, “This happens all the time with endemic diseases that have a mild expression in most healthy adults. Typically in these situations we would point to the cancer, not the cold or flu.”

On July 31, Bloomberg declared Florida “the new epicenter of the COVID-19 outbreak,” saying that the Sunshine State represented one out of every five new cases in the U.S. — and all of this grim news came with confident declarations that much of this was the fault of Governor Ron DeSantis. New cases in Florida continued to increase until mid August, with the seven-day average of new cases surpassing 22,000. Florida is often sweltering, but rarely hotter and more humid than in August, which sends people indoors to air-conditioning — which puts them closer together, and more likely to spread the virus among each other.

And then, starting in mid September, Florida’s number of new cases, hospitalizations, and deaths all started dropping like a stone. The New York Times notes this morning that, “Florida now has one of the lowest average daily case rates in the country.” A lot of people will want to attribute it to some government policy decision — Floridians finally started wearing masks again! The vaccine-hesitant finally decided to get their shots! Ron DeSantis decided to be less evil! — but a likely explanation is that the virus ran out of people to jump into who had no immunity, and as the summer heat faded, Floridians went outdoors again.

But let’s not understate the value of vaccinations and note that 68.2 percent of Floridians have at least one shot of a vaccine — a rate good enough to rank 18th out of the 50 states, and better than Delaware, Oregon, Colorado, Wisconsin, and Michigan. Those states, with Democratic governors, never seem to get nearly as much grief for low vaccination rates.

Almost 190 million people are considered “fully vaccinated” — although I suppose that definition is fuzzier, now that an FDA advisory panel unanimously recommended booster doses for the Johnson & Johnson vaccine; the advice is for all people over 18 to get the shot, even after just two months. The FDA is expected to tell those who received the Johnson & Johnson vaccine that they can get a Pfizer or Moderna shot as a booster.

On ABC News’ This Week Sunday, Dr. Anthony Fauci suggested everyone should have expected the Johnson & Johnson vaccine to be a two-shot regimen — which is not really what anyone was expecting or saying when the J&J vaccine was unveiled in February. Fauci said this weekend that, “I think that they should feel good about it, because what the advisers to the FDA felt is that, given the data that they saw, very likely, this should have been a two-dose vaccine to begin with.”

Except, back at the end of January, Fauci was telling people that the advantage of Johnson & Johnson was that it only took one dose: “A vaccine that’s inexpensive, that’s a single dose, and that has no cold chain requirements — that’s pretty good!” he told CNN.

Then on Sunday, Fauci said that, “This should have been a two-dose vaccine to begin with.” Now he tells us!

ADDENDUM: Every once in a while, you have an online encounter that makes you wonder if certain listeners, readers, or other audience members have misunderstood everything you’ve ever said from the beginning. He’s Greg Corombos, I’m Jim Geraghty, and I thought that would have been clear from all the times we’d called each other “Greg” and “Jim.”