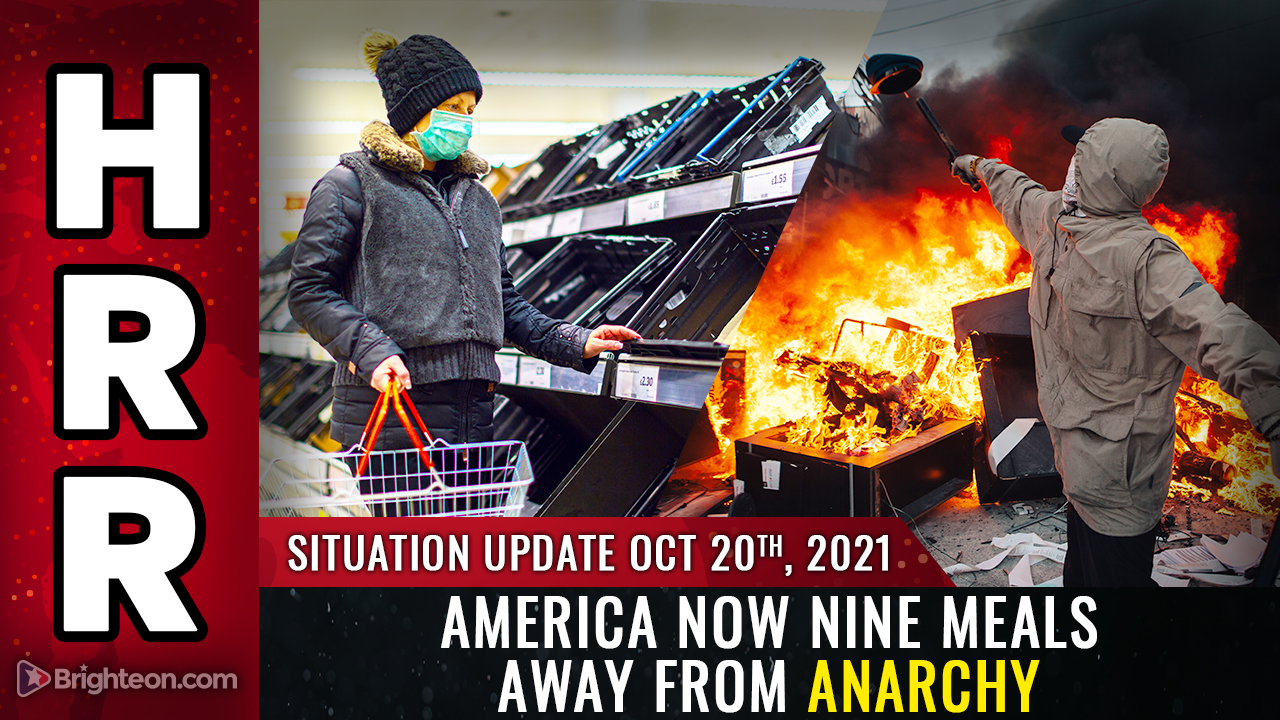 (Natural News)
Mass famine has been engineered into the coordinated takedown of the United States of America, and it’s already too late to reverse it. Widespread food scarcity is already “baked in,” so to speak, and now it’s only a matter of time as the dominoes fall.

IMPORTANT: Tomorrow’s Situation Update podcast will reveal bombshell news about the coming food rationing across America (to be announced before Christmas) and Biden’s takeover of the US supply chain with military troops. This is already in the planning stages at the highest levels of corrupt government. We have an exclusive interview with Steve Quayle on all this, also airing tomorrow on Brighteon.TV at 2 pm central tomorrow (Thursday). Tune in tomorrow for full details, and watch for the podcast to appear tomorrow morning at https://www.brighteon.com/channels/hrreport

America is being deliberately plunged into a “Dark Winter” of famine, energy collapse, hyperinflation and medical martial law. Over the next several months, we are going to witness:

I’ll be covering these issues in more detail in tomorrow’s Situation Update podcast, but even before then, we already know the following facts:

Other supermarket chains are also having a difficult time stocking shelves, the Journal reported, due to receiving unfulfilled deliveries from suppliers. The lack of supply of food has many grocers “sometimes sending their own trucks to grab goods from manufacturing plants.”

America is just nine meals away from anarchy

It is now crystal clear that the engineered food collapse is going to plunge the nation into extreme food scarcity — Venezuela-style — probably by Christmas.

The food riots won’t be far behind.

Notably, this is all by design. The Biden regime criminals are seeking to plunge America into widespread civil unrest and anarchy so they can declare martial law and suspend the 2022 elections, preserving Democrat rule for the foreseeable future.

All across America, government and corporate leaders are firing those who refuse to take vaccines while facing a mass die-off of those who did take them. The result is the deliberate gutting of the entire infrastructure that runs a nation, including transportation and logistics, medicine, law enforcement, local government, food supplies, energy, air cargo and more.

What you are watching is the systematic, planned dismantling of an entire nation. America is being gutted like the carcass of a hog in a meat plant, and the end result is inescapable: Mass starvation, destitution and anger resulting in a nationwide uprising revolt that the Biden regime will use to declare martial law.

In essence, this is January 6th on a nationwide scale. The Biden regime is baiting the entire population into an armed revolt, then using the revolt to install itself into permanent power while cancelling elections and using food scarcity as a weapon.

Entire crowds of protesters will of course be hit with aerosolized bioweapons, which DHS is testing right out in the open this week across New York City (and NYC subways and parks). These are practice runs for unleashing these deadly weapons against the American people in 2022.

Make no mistake: Biden and his globalist controllers are waging all-out WAR against the American people, which is what every Marxist / fascist treasonous government regime eventually comes to.

When you see the mass uprisings this winter, just remember it was all invoked by engineered food scarcity, and it’s playing right into the hands of the anti-American traitors who are systematically dismantling this nation — and its military — through the forced injection of biological weapons that are fraudulently labeled “vaccines.”

A lot of Americans weren’t ready to hear this truth until now. But at this moment, it’s all undeniable. You can see the evidence right in front of you. The takedown of this nation has commenced, and it won’t be long before America looks like Venezuela, complete with an engineered financial collapse and dollar reset that will be the final nail in the coffin of the American empire.

Find a new podcast each day at: