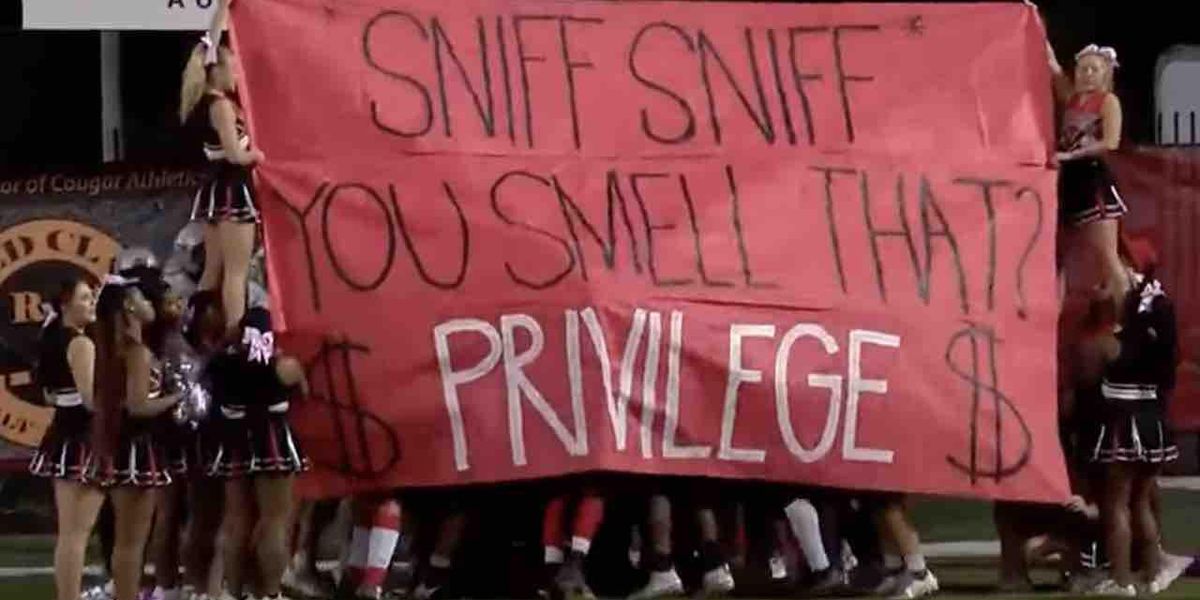 Cheerleaders from a North Carolina high school held up a red banner before a football game Friday directed at their opponents — a Catholic high school — which read, “Sniff, sniff. You smell that? $Privilege$.”

The word “privilege” was spelled out with white letters — and parents and other backers of Charlotte Catholic High School were furious and hurt over the banner, which the visiting Butler players ran through.

The station said Melissa Swanson and her son — who is a fourth-grader and biracial — attended Charlotte Catholic’s home football game against Butler High School. And she offered WBTV-TV her interpretation of the banner, which the Butler players ran through: “Here we are at a rich, white high school, and they’re all lucky. We have it hard. They don’t.”

Swanson continued to the station: “And that’s not the case — by no means. I am a single mom, and I raise my son on my own, and we pay for that school and work hard to be there.”

She also told WBTV that she had to explain the banner to her son when he asked, “Mom, don’t they see that we have other black boys on our team?”

“I just said it’s unfortunate that these things have to be discussed every day,” Swanson added to the station. “And it’s not right, and that’s why I am so proud to have him at St. Gabriel and in the Catholic School system because we teach kindness.”

She also emphasized to WBTV that among the most “disturbing” aspects of the incident “was it was children. Whether they are high school, elementary school, or middle school — they’re children. The administration, the coaches, the athletic director — they had to know it.”

How did Butler High’s district respond?

CMS is aware of an insensitive banner displayed by the Butler HS cheerleading squad prior to the school’s football game versus Charlotte Catholic last Friday. Squad members and adults responsible for oversight will face consequences as a result of that banner display. School and district officials will offer no specific information about this disciplinary matter. Principal Golden and Learning Community Superintendent Tangela Williams have spoken with leaders from Charlotte Catholic to offer verbal apologies. Butler High School cheerleaders have sent an apology letter to counterparts at Charlotte Catholic. Soon there will be a meeting between the schools’ cheerleading squads to facilitate goodwill and understanding.

We appreciate the outreach we’ve received from the Butler High School community and are confident our good relationship with them will continue. We understand how emotions surrounding sports events can sometimes result in actions that do not represent an organization’s values. It is our hope that everyone will learn from such moments because at the end of the day we are all one community.

Alford Terry, a parent of a Butler student, told WSOC-TV he stands by the students who created the sign: “It’s reality. I mean you can get upset as a parent, but kids, they have a mind of their own and they see things as what they are. We have to listen to what they have to say.”

BREAKING: CNN fires disgraced anchor Chris Cuomo; Cuomo issues statement on termination
Twitter’s New CEO Said Role Is ‘Not to be Bound by the First Amendment,’ But to Decide ‘Who Can Be Heard’
AOC is the subject of an upcoming biography examining ‘one of today’s most influential political and cultural icons’
George Clooney says he rejected a job offer that would have paid $35 million for one day of work
Pelosi Says Favorable Ruling for Mississippi Abortion Law Will Erode Supreme Court’s ‘Legitimacy’