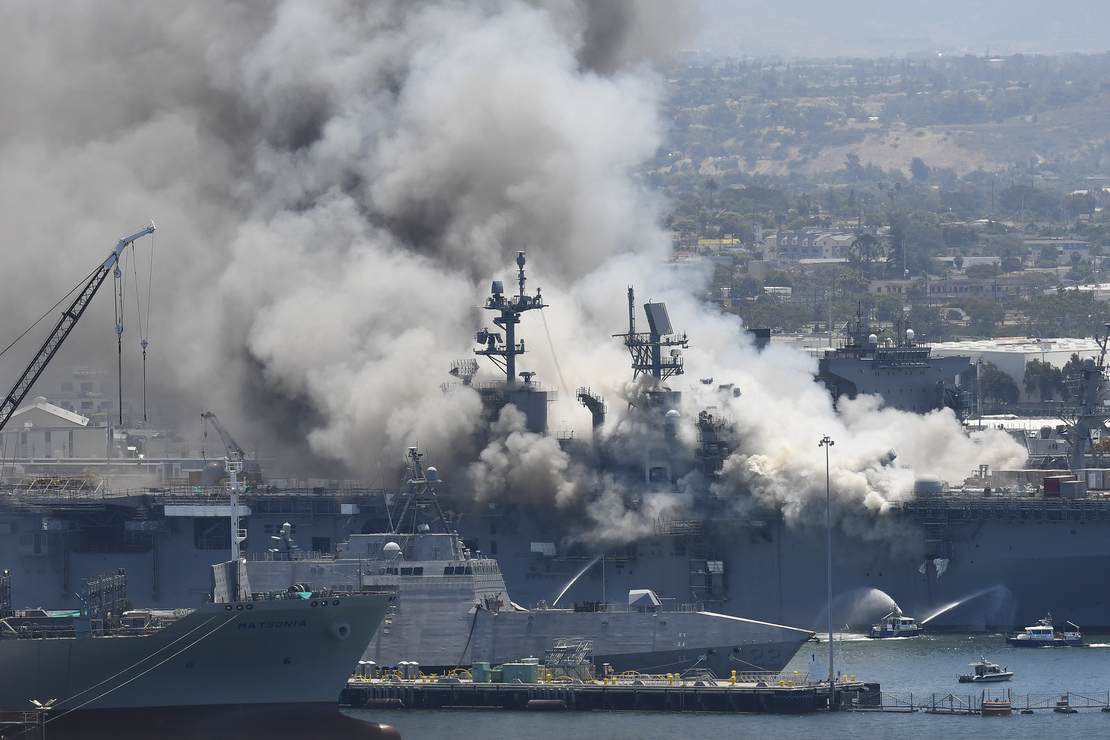 The Heritage Foundation just released its annual report on US military readiness and the short version is: It sucks.

Billed as the “only non-governmental and only annual assessment” of American military muscles and preparedness, this year’s report ought to send some chills up the spines of America’s military leadership, both uniformed and civilian.

Then again, “spine” assumes a fact not currently in evidence.

The Daily Signal (Heritage’s news outlet) sums it up this way: “U.S. military is only ‘marginally’ prepared to defend America’s interests at a time when adversaries are ramping up military capabilities.

Things look worse when you drill down even a little bit.

While the Marine Corps is still rated “strong,” the Army and Navy are both listed as “marginal” and the Air Force and Space Force are “weak.”

Maybe “woke” would be more on point.

Assessments like this one aren’t just about pushing for higher defense spending — many of our problems could be solved by gutting the Pentagon’s infamous bureaucracy.

The US Air Force’s first ever chief software officer has quit the job after branding it “probably the most challenging and infuriating of my entire career” in a remarkably candid blog post.

Nicolas Chaillan’s impressively blunt leaving note, which he posted to his LinkedIn profile, castigated USAF senior hierarchy for failing to prioritise basic IT issues, saying: “A lack of response and alignment is certainly a contributor to my accelerated exit.”

Chaillan said the current computer security situation is “a tremendous waste of taxpayer money and creates massive cybersecurity threats but also prevents us from delivering capabilities at the pace of relevance, putting lives at risk.”

You can read all of Chaillan’s parting shot here.

I probably don’t have to mention that we just got embarrassed on the global stage by a small bunch of thuggish former goat-herders in a country we’d spent two decades failing to semi-pacify.

Also for our VIPs: China Paper Tiger: Communism Explained in 30 Words (And a Lot More)

ASIDE: With the creation of the Space Force under President Donald Trump and the growing importance of controlling orbital space with just as much authority as airspace, for the sake of convenience from now on, I’ll use “aerospace power” to cover them both.

The brutal truth of America’s geopolitical situation is this: We face no existential foreign military threats by land. Our situation isn’t anything like the historical Franco-German rivalry with two major powers right next door to one another. We just have Canada and Mexico, neither a military threat.

Another brutal truth is that should the proverbial stuff hit the oscillating air purifier, armies can be raised in a hurry. Maybe not the best or best-trained armies, but it’s an historical truth that a small, professional army can be expanded quickly should the need arise.

A third brutal truth is that the same cannot be said of modern navies or aerospace forces.

Since the first B-29 Superfortress bombers entered battle in 1944, this country has been fielding small squadrons of airplanes that cost as much as a small warship, but with much more ability to bring the fight to the enemy.

We’re long past the days of coming out with new aircraft designs once or twice a year. Modern jets are nearly as complex and as expensive as modern warships, and pilot training has evolved to match.

Same thing with navies. We could practically slap together a World War II Essex-class aircraft carrier in nothing flat (I’m exaggerating to make a point), but for modern carriers, even a proven design like the Nimitz takes years to build, test, and commission. The crews have to be trained up as the best from Day One, or those years of effort and thousands of lives can be lost in a moment.

Worse: We literally no longer possess the maritime industrial base to expand our Navy much past 300 ships. We need 400, minimum, according to Heritage. The Navy might be “marginal” this year but it’s trending towards “weak,” and with no quick fix other than massive reinvestment in drydocks, training shipworkers, and all the rest. Perhaps even more difficult, we need to weed out the wokeness.

Reagan wanted a 600-ship Navy and got one. Today’s fleet is less than half that size, but the oceans haven’t gotten any smaller.

As a global maritime trading power, America either controls the seas and aerospace, or we’re suddenly all a lot poorer — or eventually, even worse.

More than 30 years ago I saw then-Congressman Jack Kemp appear on CNN’s original Crossfire show with Michael Kinsley and Pat Buchanan. I don’t remember exactly what prompted him to say this, but I’ll never forget the line: “Don’t get me wrong, I’m not a hawk, I’m a dove. I’m just a well-armed dove.”

All these years later, that’s still exactly what this country should be: A bad-ass dove, armed to the beak.

Right now, and probably for the foreseeable future, we’re some weird hawk-dove hybrid monstrosity that’s shooting too many blanks.

You have to wonder how long before some other major power will take a look at a sickly creature like that and try to put it down.

A Brutal <i>Washington Post</i> Story on Kamala Harris
Now Profits Are a Justification for Discrimination?
CNN’s Brian Stelter says that disgraced host Chris Cuomo might be back on the air as soon as January
Temple University Student Fatally Shot in Broad Daylight as Philadelphia Breaks Homicide Record
Delightful Cuomo Comeuppance