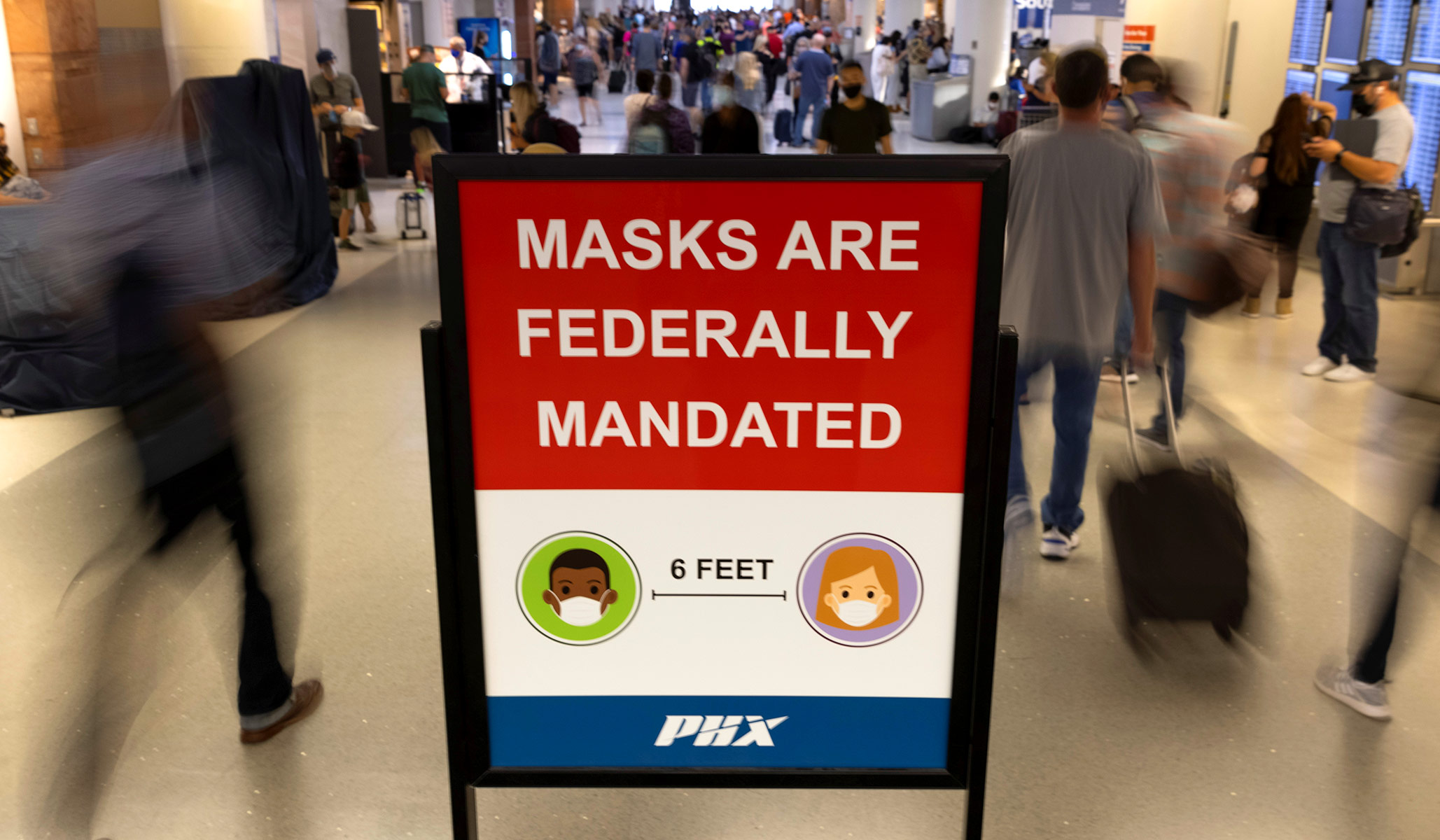 US
For some progressives, the prospect of post-COVID normalcy is terrifying.

Ben Franklin’s famous remonstrance that “those who would give up essential Liberty, to purchase a little temporary Safety, deserve neither Liberty nor Safety” is cited regularly by critics of pandemic mandates. As is the case with most pithy quotables, this is a bit simplistic; conservatives, after all, know that order is a prerequisite to political liberty. But Franklin’s central observation gets at the serious, long-standing tension between freedom and security that has been accentuated by the politics of lockdowns, vaccine passports, and mask mandates.

In jarringly Orwellian terms, some enterprising progressives have attempted to argue that security is freedom. Recall this piece, from the ACLU, which argued that “vaccine mandates actually further civil liberties” by protecting “the most vulnerable among us” and offering “the promise of restoring to all of us our most basic liberties, eventually allowing us to return safely to life as we knew it.” Others have maintained that objecting to pandemic diktats on liberty- or rights-related grounds is illegitimate: “Masks are mandatory,” Andrew Cuomo insisted last year. “You don’t have the right to infect another person.”

If we squint, these debates could be seen as an interesting example of the interplay between “positive” and “negative” freedom. That concept, popularized by Isaiah Berlin’s famous work, Two Concepts of Liberty, offers a useful framework for thinking about some of the core differences in the way that the modern Left and Right think about first principles. Negative freedom is freedom from outside coercion — what Berlin describes as “the area within which the subject . . . should be left to do or be what he is able to do or be, without interference by other persons.” Positive freedom, however, is freedom to a set of enabling conditions or provisions, defined as “the source of control or interference that can determine someone to do, or be, this rather than that.”

Both of these theories deserve consideration: While conservatives — traditionally more favorable to negative liberty — rightly worry about the lack of a limiting principle in the positive conception of freedom, there are also limitations to the strict negative understanding of politics and government. A political community is more than just a congregation of individual rights-bearers; as Madison famously wrote in Federalist No. 51, justice — not maximized individual autonomy — is the end of government and civil society.

But in the context of the pandemic, many of the justifications for lockdowns and mandates contain the seeds of something darker. Rather than a coherent vision of the scope and purpose of political freedom, the invocations of everything from “civil liberties” to “public health” often read more like ideological window dressing for the raw assertion of power.

We have learned many things about ourselves, and one another, in the course of the past year and a half. The coronavirus has taught us that at least some portion of our country — although it is difficult to discern exactly how much — is now distinctly uncomfortable with the kind of freedoms that Americans enjoyed before March 2020. The simmering hysteria that underpins the mask discourse, the conviction that easing lockdowns amounts to literal murder, and the indefinite suspension of the promised “return to normalcy” are all born from what the political philosopher Michael Oakeshott described as the “anti-individual” impulse. That impulse, Oakeshott wrote, is an anxiety about the experience of individual liberty itself — a “revulsion from individuality” that drives a desire for “a solidarité commune in which there [is] no distinction of persons and from which no one [is] to be exempt.”

The anti-individual distaste for the conditions of a free society — a visceral horror at the possibility that someone, somewhere, is living differently from oneself — has always animated a certain kind of technocratic progressive but has potentiated and spread alongside the virus itself. As Oakeshott observed in his seminal book, On Human Conduct, “the determined ‘anti-individual’ is intolerant not only of superiority but of difference, disposed to allow in all others only a replica of himself, and united with his fellows in a revulsion from distinctness.” For the anti-individual, the politics of conformity and radical sameness are preferable to those of self-determination — his anxious neuroticism is incurable unless it is “imposed on all alike,” as Oakeshott wrote in another essay. “So long as ‘others’ were permitted to make choices for themselves,” Oakeshott added, “not only would his anxiety at not being able to do so himself remain to convict him of his inadequacy and threaten his emotional security, but also the social protectorate which he recognized as his counterpart would itself be disrupted.”

We have witnessed this impulse constantly throughout the pandemic — often on display inadvertently. Take, for example, a recent attack ad run against Florida governor Ron DeSantis, which intersperses ominous music and color-drained images with clips of DeSantis announcing his terrifying intention to “trust people to make their own decisions” rather than “bludgeoning people with restrictions and mandates and lockdowns.” An invisible enemy like a contagious virus seems to confirm the worst fears of those already predisposed to the kind of anti-individual character that Oakeshott described — so much so that the prospect of “trusting people to make their own decisions” is genuinely unconscionable.

In material terms, this kind of thinking leads to the desire for ever-expanding forms of political control. It is no wonder, then, that certain American elites have been so reluctant to relinquish their newfound pandemic powers. And abroad, things are often much worse: In Australia, an absolutist approach to lockdowns has transformed what was recently a free country into something approximating a police state.

Fortuitously, our constitution is uniquely attentive to the preservation of the blessings of liberty. But we should be concerned that so many of our fellow citizens seem content to preserve pandemic restrictions indefinitely. As Abraham Lincoln reminded us, “public sentiment is everything. With public sentiment, nothing can fail; without it nothing can succeed. Consequently he who moulds public sentiment, goes deeper than he who enacts statutes or pronounces decisions. He makes statutes and decisions possible or impossible to be executed.” Liberty will survive as long as it is enabled by popular support. But when Americans begin to prefer the warm blanket of technocracy to the inherent uncertainty of self-determination — when basic freedoms begin to be seen as irresponsible and reckless — our way of life erodes.

Gov. DeSantis: ‘Big Tech Has Become the Censorship Arm of the Democratic Party’
Scottish Rugby Player Siobhan Cattigan Dies Suddenly at the Age of 26
BOMBSHELL: There is NO scientific evidence that covid-19 vaccines have saved a single life
Three Dead in Michigan High School Shooting, 15-Year-Old Suspect in Custody
‘Guard for news crew dies after being shot in attempted robbery’