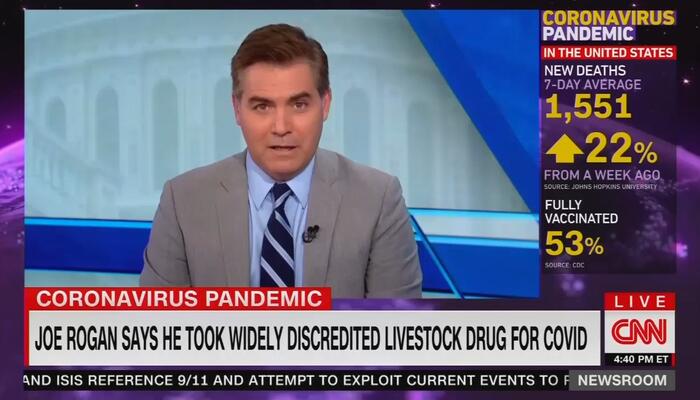 In a piece posted on Thursday evening, Washington Post media reporter Erik Wemple called out CNN for the liberal news network’s refusal to admit that they misinformed viewers in claiming that podcast host Joe Rogan used “horse dewormer” to treat his COVID infection.

Wemple had just prodded CNN into giving an official statement on the subject in which their PR department doubled down in defending  how their anchors handled the issue.

The heart of this debate has been purposely confused and ultimately lost. It’s never been about livestock versus human dosage of Ivermectin. The issue is that a powerful voice in the media, who by example and through his platform, sowed doubt in the proven and approved science of vaccines while promoting the use of an unproven treatment for covid-19 — a drug developed to ward off parasites in farm animals. The only thing CNN did wrong here was bruise the ego of a popular podcaster who pushed dangerous conspiracy theories and risked the lives of millions of people in doing so.

After reciting quotes from some of the many times that CNN anchors and analysts had flat-out stated that Rogan was using “horse dewormer” or a drug that was made for use in ”livestock,” Wemple added:

They turn up a consistent formulation from multiple CNN voices that surely wasn’t a sober recitation of the facts. By highlighting that ivermectin is a horse dewormer, and downplaying that ivermectin has important uses for people, CNN facilitates a certain assumption among its viewers. Namely, that Rogan had been haunting the aisles of Tractor Supply.

Video of the coverage also shows that the chyron repeatedly displayed on screen words to the effect that Rogan was taking “horse dewormer” or a “livestock drug.”

Although these statements aired on CNN the first week of September, it was not until October 13 that Rogan confronted CNN medical analyst Dr. Sanjay Gupta about the issue when he appeared as a guest on Rogan’s show. Later that day, as Dr. Gupta appeared on Don Lemon Tonight, Lemon insisted that CNN had done nothing wrong in how it described the medicine Rogan was taking: “He (Joe Rogan) did say something about Ivermectin that I think wasn’t actually correct about CNN and lying, okay? Ivermectin is a drug that is commonly used as a horse dewormer. So it is not a lie to say that the drug is used as a horse dewormer.”

As Wemple reacted to CNN’s statement, he noted that it had a point in that Rogan’s touting of Ivermectin is questionable because it has not been proven to be effective against COVID. Recalling that he had consulted with Scott Philips of the Washington Poison Control Center in Seattle about the matter, the Post analyst then took aim at how dodgy CNN’s reporting on the topic actually was:

Yet CNN’s statement sounds more like the work of an advocacy group than a journalism outfit. The “issue,” actually, begins and ends with the integrity of CNN’s content. If we take Rogan’s prescription claim at face value — and CNN hasn’t challenged it — then the network’s coverage was slanted in some cases and straight-up incorrect in others. “[I]f you’re prescribed the FDA human version [of ivermectin] then you’re not taking a horse pill,” notes Phillips in an email.

Wemple insightfully summed up the problem with CNN’s coverage of the issue:

So in this instance, you don’t have to endorse Rogan to abhor CNN’s coverage of this topic. Here’s a network, after all, that prides itself on impeccable factual hygiene, a place where there’s no conceptual hair too fine to split, no political statement too sprawling to flyspeck. It’s tough living by your own standards. If CNN wants to describe ivermectin in a way that doesn’t slime the people who take it, the Guardian provides a fine template: “a drug used against parasites in humans and livestock.”

ERIN BURNETT: Next, Joe Rogan, one of the world’s most influential podcasters, who has dismissed the COVID vaccine completely, has just announced he has COVID, and he’s being treated with some drugs, including one intended for livestock. … Breaking news, one of the world’s highest paid and most influential podcast hosts, Joe Rogan, just announcing that he’s tested positive for coronavirus. Rogan telling his 13 million Instagram followers that he was treated with several drugs, and he included Ivermectin on the list, a drug used for livestock. The FDA and the CDC warned against using it to treat COVID. …

…How dangerous is this drug? And how dangerous is it for somebody who is so influential to be pushing it? … You’ve got this thing that can be toxic to human beings, and now vaccinated and unvaccinated people, I understand, are asking you for it on a daily basis. So, Doctor, when someone comes to you and asks for it, what are their reasons for wanting the drug? And how do you respond? How do you have this conversation with them?

ANDERSON COOPER: There’s breaking news. Joe Rogan — a popular comedian and podcaster who has told his listeners the COVID vaccine is not necessary for young people, just disclosed he has COVID. He also acknowledged taking a controversial treatment designed for animals. … One of those drugs he mentioned, Ivermectin, is something more often used to deworm horses. The CDC says there’s no evidence it works on COVID. Its increase in usage has only led to a substantial increase in overdoses after a push by some on the far right seeking vaccine misinformation….

BRIAN STELTER: ….But when you have a horse deworming medication that’s discouraged by the government that actually causes some people in this crazy environment we’re in to actually want to try it. That’s the upside down where we’re in with figures like Joe Rogan.

COOPER: So Dr. Wen, Ivermectin, apparently given to deworm animals, why are people using this? I mean, I know, you know, it’s being spread online and stuff, but what is the theory that it works?

DON LEMON: Controversial podcast host Joe Rogan saying that he tested positive for COVID, and he says he is taking several medications, including a drug made for deworming livestock. … But he also says that he took the deworming drug Ivermectin that’s been touted by fringe right-wing groups.

BAKARI SELLERS, CNN CONTRIBUTOR: You have individuals like Joe Rogan, for example, who doesn’t want to take an experimental vaccine but will take horse dewormer

JIM ACOSTA: Joe Rogan told his enormous audience this week that he’s treating his illness in a way doctors are begging people not to, … In case you missed it, Rogan said the word “Ivermectin.” Yes, that’s the deworming medicine made to kill parasites in farm animals, and, weirdly, it’s being promoted by right-wing figures and even some politicians as a COVI treatment. The FDA says — yes, the actual FDA is so frustrated with this they tweeted this out. “You are not a horse. You are not a cow. Seriously, y’all. Stop it. fda

BORIS SANCHEZ: Ivermectin, that horse dewormer that’s led to a lot of emergency room visits — I see you shaking your head. People have been taking this thing trying to treat COVID, but it led to a lot of folks getting poisoned which led to this tweet from the FDA warning people not to take it, and yet, celebrities like Joe Rogan who’s been talking about taking it. You see this tweet: “You are not a horse. You’re not a cow. Seriously, stop it.” …  It’s striking to me that Joe Rogan promotes psychedelic drugs that he gets from who knows where and he doesn’t really know what’s in them,

JIM ACOSTA: Joe Rogan — he came down with COVID. He says he’s been taking the livestock dewormer, Ivermectin, as well as other treatments people talk about on the internet.

Dr. SANJAY GUPTA, CNN MEDICAL CORRESPONDENT: That’s right. That’s correct. It is not approved for COVID, and you’re right. I mean, the FDA put out a statement saying, you know, basically reminding people of the strange sort of message from the FDA but said, “You’re not a horse, you’re not a cow, stop taking this stuff,” is essentially what they said, referring to ivermectin. Now, I think what Joe’s point is —

LEMON: It’s been approved for humans but not necessarily for COVID, right?

GUPTA: That’s correct. It’s been used for a parasitic disease for something called river blindness, and it’s been very effective for that. But, you know, just because it works for one thing, doesn’t mean it works for something else. And there are still a few ongoing clinical trials around ivermectin, but, for the most part, if you look at the data, there’s no evidence it really works here. When Joe got sick, he took ivermectin — he also took monoclonal antibodies which is, you know, an infusion of these antibodies. So he took both those things. It’s very likely it was the monoclonal antibodies that made him feel better so quickly.

LEMON: Sanjay, always a pleasure. I hope this was an easier experience than Joe Rogan.