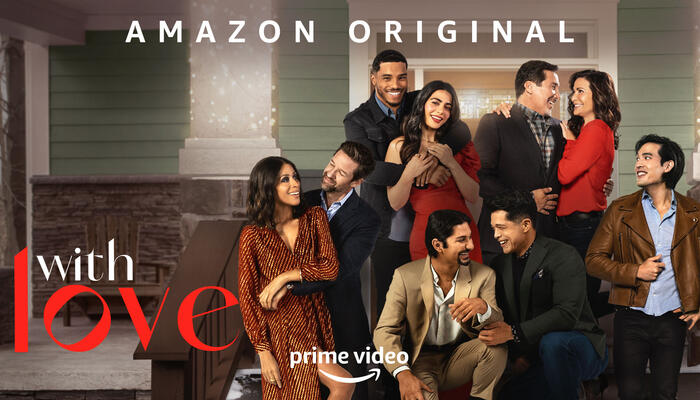 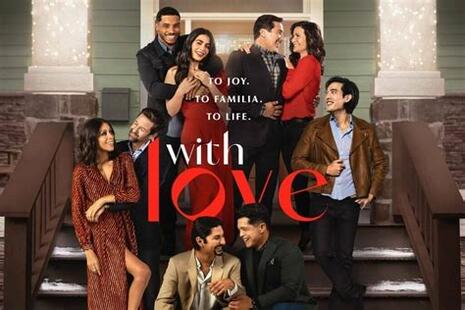 It’s a woke wonderful time of the year! Celebrate the holidays by breaking the gender binary and hating America with Amazon Prime’s new series With Love, released December 17.

Set in a Portland, Oregon, without riots, With Love follows a large Hispanic family through the different holidays of the year as they navigate romantic relationships. This being 2021, that means many of the relationships are designed to smash the “heteronormative” hang-ups of fuddy-duddies such as “God” and “the Catholic Church.”

The series’ main characters include siblings Jorge (Mark Indelicato) and Lily Diaz (Emeraude Toubia). Jorge is homosexual and avoids Catholic Mass because “the Lord is kind of a dick about us.” The siblings have a trans-female (male to female) cousin named Sol (Isis King). Sol uses “they/them” pronouns and is dating a male doctor, Miles (Todd Grinnell), who has a 13-year-old “genderqueer” child named Charlie (Birdie Silverstein).

Charlie is played by the daughter of actress Busy Phillips. Phillips notoriously made an unhinged speech in 2020 thanking her abortion for her professional success. Since then, Phillips has been proudly bragging that Birdie, her eldest living child, came out as a lesbian at the age of 10. Now 12, Birdie is also “non-binary” and uses they/them pronouns. Not sure how a kid can be “lesbian” and deny the sexual binary, but coming out as sexually confused has been great for Birdie’s career. That is what happens when your mother, an abortion-loving fanatic, grooms you for ”genderqueer” parts on Amazon Prime shows.

Truth be told, I cannot tell what makes the character of Charlie a “genderqueer” kid who is “breaking the binary,” as the show claims. Mostly, she is a girl who looks like a girl and acts like a girl. When Sol tries to bond with Charlie over their gender-smashing queerness, Charlie lets Sol know that ”All my friends are queer, too.” Charlie loves swimming because “in the water I don’t have to be a boy or a girl.” Actually, swimming is one of those spaces where physical differences between male and female is most visible but woke dialogue does not have to make sense. It just needs to push the agenda.

Miles pulled Charlie from a Catholic school and put her in public school because the Catholic school would not play along with Charlie’s “gender expansive” delusions. The school’s refusal to embrace LGBTQIA madness led Miles to separate himself from the Church. “Any religion that doesn’t accept my kid for who they are….It’s not a religion I want to get on board with,” Miles says during dinner with Sol and Sol’s grandparents, Marta (Renee Victor) and Luis (Pepe Serna). Hollywood really hates that the Catholic Church has not thrown out over 2000 years of teaching on human sexuality.

Grandparents Marta and Luis get a regular serving of LGBTQIA discussions at family dinners. When their gay grandson, Jorge, introduces them for the first time to his bisexual boyfriend, Henry (Vincent Rodriguez III), at a family Christmas party, Henry gives the whole family a primer on his bisexuality.

Henry: It’s like this. What is your favorite type of Christmas music, Dona Marta?

Marta: Oh, that’s hard. Um…to me, it’s not Christmas if Gloria Estefan isn’t playing, but I also like Frank Sinatra.

Henry: What if you had to pick one?

Marta: Oh, why can’t I listen to both?

Henry: Exactly. Now I love Frank, but I also really like Gloria. Sometimes I expand my pallet, but that’s a lesson for another day.

Luis: I get it. I love fish tacos, but I like chorizo con huevos, too. I’m like a food bisexual.

Jorge: Sure, yeah. Let’s go with that.

Marta: Okay. That was fun, huh? But you do go to church, though, right?

Jorge: Yes, he does.

Marta: Pues, que lindo. You are a good boy. Let’s eat! Come on. Everybody.

Well, what boyfriend hasn’t told the grandparents that choosing sexual partners is the same as choosing music or tacos? Totally normal Christmastime conversation with the family.

There are some straight couples in the series, ”unhappy with their heteronormativity,” as Jorge describes the heterosexual world. Jorge and Lily’s parents are a straight couple who are growing distant and ultimately seek marriage counseling. They meet their marriage counselor, Mia (Kecia Lewis), on the Fourth of July for a session.

Mia hates Independence Day. “I don’t consider the fourth of July a holiday. This nation was built on bloodshed and stolen land, and I’m supposed to crack open a cold one with the boys to celebrate? Please. The Constitution makes it very clear. The day is for white men who own property, and I’m a black lady who rents,” she tells her clients.

Apparently, she knows almost nothing about American history, from the 14th, 15th and 19th Amendments of the U.S. Constitution to the role black Americans played in the American Revolution. But woke Hollywood has gone full communist ever since the publication of the 1619 Project and 2020’s “summer of love.” Writers have been working overtime in their scripts to disparage America’s founding principles.

With Love’s creator, Gloria Calderón Kellett, says she wanted to make a “2021 version of ‘Love, Actually.‘” She hoped to make a series that would “add to the canon of those Christmas, warm, fuzzy things that we want to watch every single year.”

But Christmas scripts which hate on America, “heteronormativity,” and Christianity are not going to enter the “Christmas canon.” They will at best be forgotten and at worst looked back on with disgust at an era when woke Hollywood ruined even Christmas entertainment.