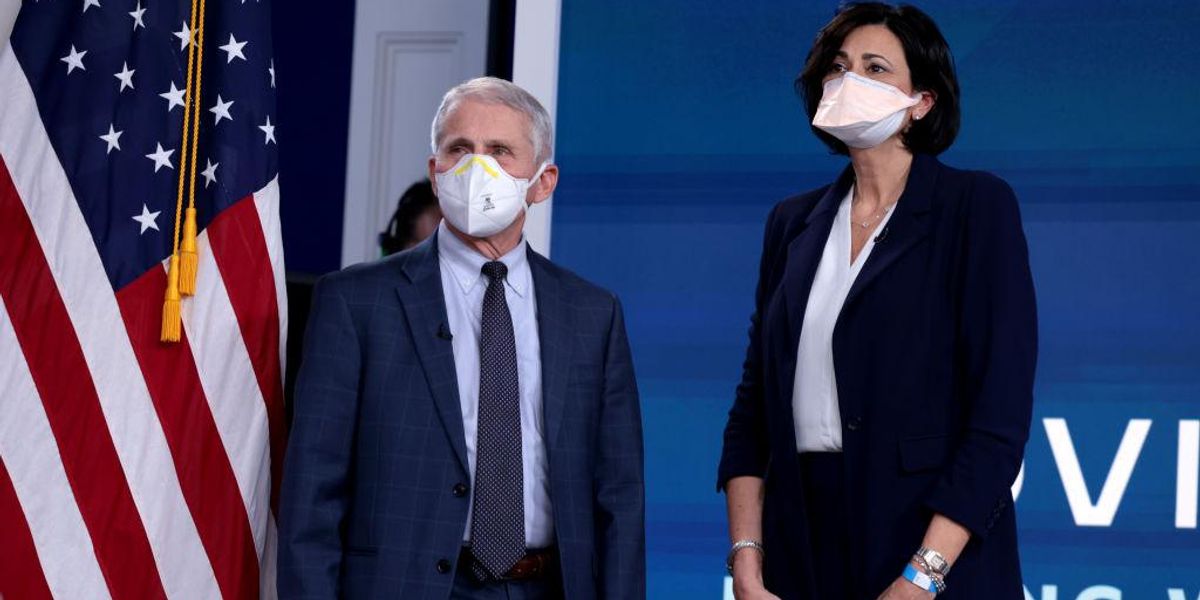 The Centers for Disease Control and Prevention is under fire from health experts and employee groups that say the new COVID-19 isolation and quarantine guidance doesn’t follow the science. The critics are saying the government is changing the rules for practical reasons — to keep the economy from shutting down — and comments from CDC Director Rochelle Walensky and White House chief medical adviser Dr. Anthony Fauci indicate the critics have a point.

On Monday, the CDC rolled out new guidance shortening the time people who test positive for COVID-19 are recommended to isolate before interacting with other people. Previously, a person who tested positive for the virus was supposed to quarantine for 10 days. Now, the CDC says people who test positive are asked to isolate for five days and then, if they have no symptoms, they may leave quarantine as long as they wear a mask around others. The new guidance applies to everyone, regardless of vaccination status.

But here’s what’s causing controversy: The new guidelines do not require a person in quarantine to test negative for the virus before leaving isolation after five days. They are also silent on the type of mask a person leaving quarantine should wear, even though the weight of scientific evidence suggests that cloth masks, which are highly popular, are not that effective at stopping transmission of the Delta or Omicron coronavirus variants.

Fauci and Walensky insist the change is based on science demonstrating that most COVID-19 transmission happens 1-2 days prior to the onset of symptoms and 2-3 days afterward.

Health experts commenting on social media criticized the lack of a testing recommendation, with one epidemiologist going so far as to call the guidance “reckless.”

CDCu2019s new guidance to drop isolation of positives to 5 days without a negative test is recklessnnSome ppl stay infectious 3 days,Some 12nnI absolutely donu2019t want to sit next to someone who turned Pos 5 days ago and hasnt tested NegnnTest Neg to leave isolation early is just smart

On Tuesday night, Fauci went on MSNBC with host Chris Hayes to defend the new guidance. Hayes was clearly skeptical of the new rules, asking if there was actual science behind the change or if the CDC made a “policy judgement” based on certain “trade-offs” — like making sure that America’s infrastructure doesn’t shut down because essential workers are forced to quarantine for 10 days if they test positive for COVID.

.@chrislhayes pressed Fauci tonight on new CDC guidance.nnHAYES: Is there any science backing up the idea that after 5 daysu2026 youu2019re not still shedding virus?nnFAUCI: This is one of those situationsu2026 that we often say, you don’t want the perfect to be the enemy of the good.pic.twitter.com/NVSqfZ8yUk

“Nothing is going to be 100%,” Fauci answered, calling the CDC’s decision a “difficult situation.”

“You don’t want the perfect to be the enemy of the good,” Fauci said, arguing that after five days, mask-wearing should provide enough protection against virus transmission for asymptomatic, COVID-positive people to leave quarantine.

Walensky echoed Fauci’s comments in an interview on Wednesday morning, but was even more forthright about how the CDC considered people’s resistance to coronavirus restrictions before coming to its decision.

CNN’s @kaitlancollins: “It sounds like this decision had just as much to do with business as it did the science.”nn@CDCDirector Dr. Rochelle Walensky: “It really had a lot to do with what we thought people would be able to tolerate.”pic.twitter.com/Ek3X3S7Q9S

“It really had a lot to do with what we thought people would be able to tolerate,” Walensky admitted.

Both Fauci and Walensky have also vigorously denied that the lack of a testing requirement is due to limited supply of virus tests in the U.S., contradicting multiple news reports on the CDC’s decision-making.

CNN reported Tuesday that a shortage of tests factored into the administration’s decision, quoting a senior administration official.

“If we require a test, people are going to say, ‘What if we can’t get a test?'” the official told CNN. “Rather than letting the perfect be the enemy of the good,” the official said, the CDC went with looser restrictions, although the official noted that “best practice would also include a test for SARS-CoV-2 at day 5 after exposure.”

The New York Times corroborated that report: “A scientist who has discussed isolation policy with the C.D.C. in recent months said that officials said the agency could not recommend rapid tests while supplies were so scarce. The scientist spoke on the condition of anonymity to describe confidential discussions.”

But Fauci has outright denied that claim. “The reason the CDC gives is not because there is a shortage of tests,” he told CNN on Tuesday. Walensky said the same thing Wednesday morning.

So Fauci and Walensky have admitted the policy change was not based solely on scientific evidence, but other considerations as well. And they appear to be lying about, or at least obfuscating, the factors that went into the CDC’s decision.

As for their claims about COVID infections not being contagious after five days, some health experts who spoke to the New York Times disagreed. Yonatan Grad, an associate professor of immunology and infectious diseases at the Harvard T.H. Chan School of Public Health, said the CDC’s policy “feels honestly more about economics than about the science.”

“I suspect what it will do is result in at least some people emerging from isolation more quickly, and so there’ll be more opportunities for transmission and that of course will accelerate the spread of Covid-19,” he told the Times, adding that people are unlikely to strictly follow the CDC’s masking guidelines after returning from quarantine.

“I don’t think reducing the time for isolation overall is a bad idea,” said Angela Rasmussen, a virologist at the Vaccine and Infectious Disease Organization at the University of Saskatchewan in Canada. “But saying, ‘Five days is probably OK, based on Delta, so let’s give it a shot and see,’ is really not what you should be doing.”

Labor groups have also protested the guidance, fearing that employers will require sick employees to return to work after five days, when they might still be contagious.

“It’s only going to lead to more illness, more cases,” said Jean Ross, president of National Nurses United, during an appearance on CNN.

Sarah Nelson, president of the Association of Flight Attendants, told CNN separately that her union is concerned that the CDC changed its policy after receiving pressure from business groups to do so. Last week, Delta Air Lines CEO Ed Bastian and company chief health officer Henry Ting, along with medical adviser Carlos del Rio, sent a letter to Walensky urging the CDC to shorten the isolation period from 10 days to five.

“Our concern is that this is putting all the onus on the workers and when you put policies forward that are pro-business and not grounded in public health, it gives people reason to pause and not trust our public health requirement,” Nelson said.

The problem is that even people who were fully compliant with social distancing, masking, and vaccination mandates are testing positive for COVID-19. Hundreds of flights were canceled over Christmas weekend because flight crew members tested positive for COVID, despite airline employee vaccine mandates, and had to call in sick, without anyone to replace them.

Faced with a virus that is continuing to infect even those that have fully complied with the government’s guidance, the Biden administration can either continue to insist that people adhere to its recommendations — which will shut down the economy again — or they can change the guidance to keep the economy open. It appears they have chosen the latter, frustrating health experts.

“I wish they just came out and said [the real reason],” George Washington University public health professor and former Planned Parenthood president Leana Wen said on CNN Tuesday, according to The Hill. “Tests actually are needed to exit isolation, but if we don’t even have enough tests right now to test symptomatic people, then we cannot possibly issue a guidance for all of America to exit isolation that way.”

Woke Wednesday: A Whole Generation of Kids Is Being Destroyed by the Left
Nord Stream pipeline SABOTAGE clearly orchestrated by ruthless Biden regime: Nuland, Biden and Sen. Johnson all demanded “ending it permanently” by any means necessary
Squires: Democrats silenced the lambs so they can eat the sheep
Whoopi Goldberg defends embarrassing Biden moment when he calls for politician who died a month ago
This Liberal Filmmaker Is Standing Up to the Censor-Loving Progressive Mob