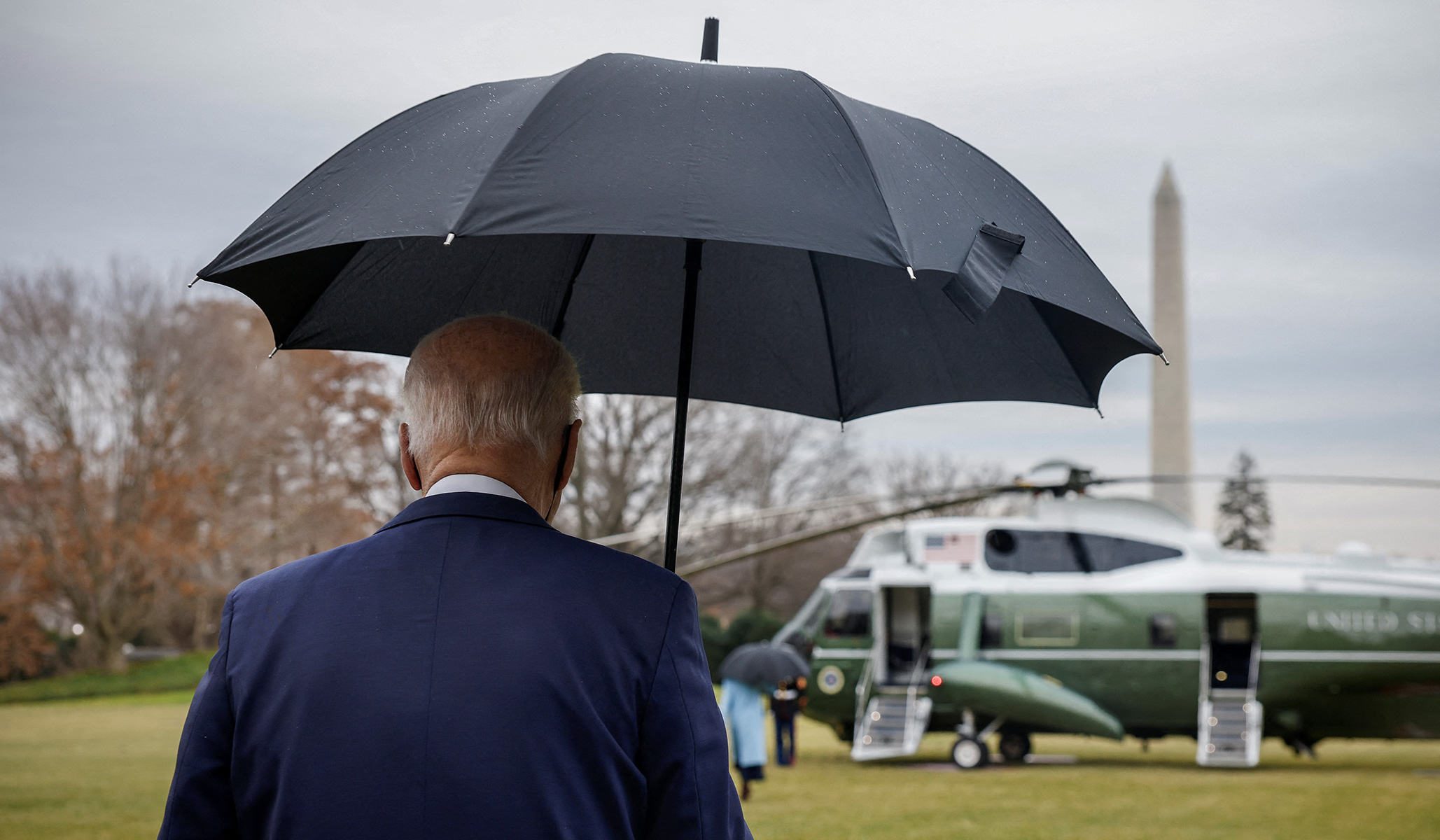 This is the last Morning Jolt of 2021. I’ll see you January 3. Let’s close out the year by looking at what 2021 brought us and what 2022 is likely to bring. I think the one word that will most succinctly summarize 2022 is “reckoning.”

A Settling of Accounts

I can’t predict specifically what’s going to happen in 2022. But I think I can predict the general theme of the coming year: a reckoning, in the sense of a settling of accounts.

Up until the Trump era, America’s role in the world was shaped by a somewhat bipartisan consensus, sometimes snidely referred to as the foreign policy “blob.” If you look at the worldview of the Davos conference, the United Nations, the World Bank, and most of the employees of the State Department, you see this worldview at work: Diplomacy solves problems. We offer tsk-tsk statements about human rights. Engagement with other countries always pays off in the end.

The Trump presidency offered a brief interruption of that consensus but without much of a coherent alternative. The Trump administration was allegedly a bunch of unilateralist cowboys who put America first, and who didn’t care about world opinion . . . but also pushed through the Abraham Accords, a diplomatic breakthrough that even staunch Trump critics recognize as a significant accomplishment. Trump pledged to end “endless wars” but didn’t hesitate to launch military strikes, slay Iran’s Qasem Soleimani, and so on. He played footsie with foreign dictators with little to show for it, was brusque and difficult with allies, and when the coronavirus pandemic broke out, Trump demonstrated no ability to unite the world, either against the virus or against China.

Joe Biden was very proud of himself for instantly restoring America’s role in the world upon taking office, strutting around and declaring “America is back!” But what Biden meant was that the U.S. would start attending international summits and signing relatively meaningless joint statements again. Biden allegedly wants to pivot to Asia but has a bad habit of backing down to Beijing when things get tough. (This is the kind of White House that throws a “Democracy Summit” but doesn’t want to display Taiwan as an independent country, lest that anger Xi Jinping.) Biden talks tougher about Russia, and intermittently really tries to galvanize alliances against Vladimir Putin, but even here, the Biden administration is sending signals that they’re looking for a chance to make a deal and reward Russian aggression.

At minimum, China exacerbated the threat of the Covid-19 pandemic by lying for three weeks, and there’s a giant stack of circumstantial evidence that the whole world has been dealing with a deadly, mutating virus because of recklessness and negligence at a Chinese biological research lab. And Joe Biden just isn’t interested in discussing that. Apparently focusing world attention on that might not be good for “stability.”

The chaotic withdrawal from Afghanistan — with American citizens, green-card holders, and Afghan special immigrant visas still stuck in Taliban territory today — sent a clear signal to the world. The U.S. is not in the business of fighting anymore; we’re not even in the business of rescuing our allies when they’re being hunted down and murdered. We will sanction you, we will denounce you, we might even cut off your access to the international banking system, which will no doubt inflict some pain. But we’re never going to metaphorically punch you in the face for being a bully. We want messy foreign policy stories to get off the front page. This administration wants to get back to domestic issues. Hell, we’re even willing to say to the world that the Taliban are “candid and professional.” The United States is back in the business of paying the Dane-Geld.

Vladimir Putin noticed that we desperately want to avoid conflicts, and Xi Jinping noticed, and the Iranian mullahs too. Every dictator, rogue state, thug, militant faction, and terrorist group around the world is noticing. So, while I don’t know for certain that Russia will invade Ukraine or China will invade Taiwan, I find it hard to believe that the world stage will be safer and more secure at the end of 2022 than it is at the end of 2021.

Joe Biden thought that simply by being himself, being nice to our allies, and saying the right things, he and his administration would bring about a safer and more stable world. It was a spectacular miscalculation of the scale of the challenge, and we will be reckoning with the consequences of that miscalculation for a long time.

Closer to home, the remarkable story of 2021 was that Joe Biden, the man who won the Democratic presidential primary because he wasn’t a socialist like Bernie Sanders, has been terrified of standing up to the left wing of his party. Maybe it’s the fault of those historians who visited Biden early in the year and told him he could be the next Franklin Roosevelt or Lyndon Johnson.

Donald Trump was a spectacularly flawed president who ran for reelection near the peak of the worst public-health crisis in a century . . . and yet an exceptionally small margin of about 44,000 votes combined in Georgia, Arizona, and Wisconsin separated Biden and Trump from a tie in the Electoral College. America didn’t fall in love with Joe Biden; the former vice president was just “good enough for now.” Biden wasn’t elected to be FDR or LBJ. He was elected to just not be Donald Trump — and even then, just barely, while his party lost seats in the House and got the Senate majority on a technicality. The only mandate that Democrats won in 2020 was “just stop all the crazy endless circus nonsense and end this farshtunken pandemic.”

Never the most careful speaker, Biden told a town hall in July that “you’re not going to get Covid if you have these vaccinations” and this autumn claimed that the vaccinated “do not spread the disease to anyone else” and “cannot spread it to you” — long after the medical community definitively knew and stated otherwise. (Biden’s precautions are contradictory and odd: He doesn’t wear a mask while inside a small shop where a sign says it is required, but wears a mask while walking on the beach alone with Jill.) Now, even the most enthusiastic supporters of vaccination must confront a fundamental messaging problem. The vaccines were sold as the solution to the pandemic, and they’ve thankfully largely solved the problem of death and long ICU stays. But more than 85 percent of American adults have a least one shot, and at the moment, the entire country is in the highest state of community transmission. Omicron doesn’t care if you’re vaccinated; it’s going to use your body to transfer to new destinations like you’re O’Hare International Airport.

Hopefully, the Omicron variant is the last hurrah of SARS-CoV-2, and once everyone or almost everyone catches the hyper-contagious variant, we’ll all have some level of immunity and the virus will run out of people to infect. It will then either die off or further mutate — in reversion to the mean — into just another seasonal upper-respiratory virus. But the damage to public trust is done. Fauci, Walensky, smug governors who break their own quarantine restrictions — many Americans are way more skeptical and suspicious of official edicts than they were before the pandemic.

In domestic policy, the “go big” approach for Biden has largely failed: The administration has shown a stubborn refusal to recognize that the scale of what can be passed when the president’s party has a minimal House majority and a 50–50 Senate is pretty small. For a longtime veteran of the Senate, Biden has surprisingly bad instincts, publicly trashing West Virginia senator Joe Manchin when that’s precisely the man who decides what can pass in the Senate.

Once in office, Democrats, particularly progressive Democrats, interpreted the 2020 results as “spend another $6 trillion on top of the trillions we spent to deal with the pandemic, keep mask mandates in place, threaten to fire people who don’t get vaccinated, promote critical race theory in schools, publicly fund abortion, demonize if not abolish the police,” and so on. I don’t even think they “misread” their mandate; I think they saw control of the White House, Senate, and House of Representatives as a once-in-a-decade chance to push through policy changes the public would never support. Long ago, large segments of both parties concluded that the slow, tedious, difficult work of building a consensus is for wimps.

Now Democrats have opened their Christmas presents — sorry, Winter Solstice presents — and realized most of the boxes are empty. They got a Covid relief bill and an infrastructure bill, but Santa Joe didn’t deliver statehood for the District of Columbia or Puerto Rico, an expanded Supreme Court, the Green New Deal, citizenship for illegal immigrants, a federal takeover of voting laws, or much else on their wish list.

One year of Democratic governance, based on a plethora of faulty assumptions, has brought the country a border crisis, an inflation crisis, a supply-chain crisis, a labor-shortage crisis, and a general sense of disappointment and Jimmy-Carter-esque “malaise.” It is extremely likely that, at minimum, Republicans have a good midterm election cycle and win back the House and Senate. Based on the current conditions, and what we saw in the 2021 elections in Virginia, New Jersey, and elsewhere, we could well see a red tsunami — with Republicans winning back a lot of governorships they lost in 2018 and sweeping the down-ticket statewide offices and state legislative races.

You may find this forecast not particularly cheery, but I actually think we’ll feel better overall at the end of 2022. This year was a rebuilding year, and I’m not just talking about the New York Jets. The coming year is time to leave this pandemic in our rearview mirror and re-embrace everything that it took from us: vacations, parties, festivals, conferences, big family gatherings, holidays, and every form of human connection that was cruelly denied in 2020 and for some of the early portions of 2021. The pandemic forced a lot of people to alter their plans, put some dreams on the back burner, wait, compromise, isolate, and live smaller, less fulfilling lives. Enough of all that. Let’s tackle this year to come.

See you in January.