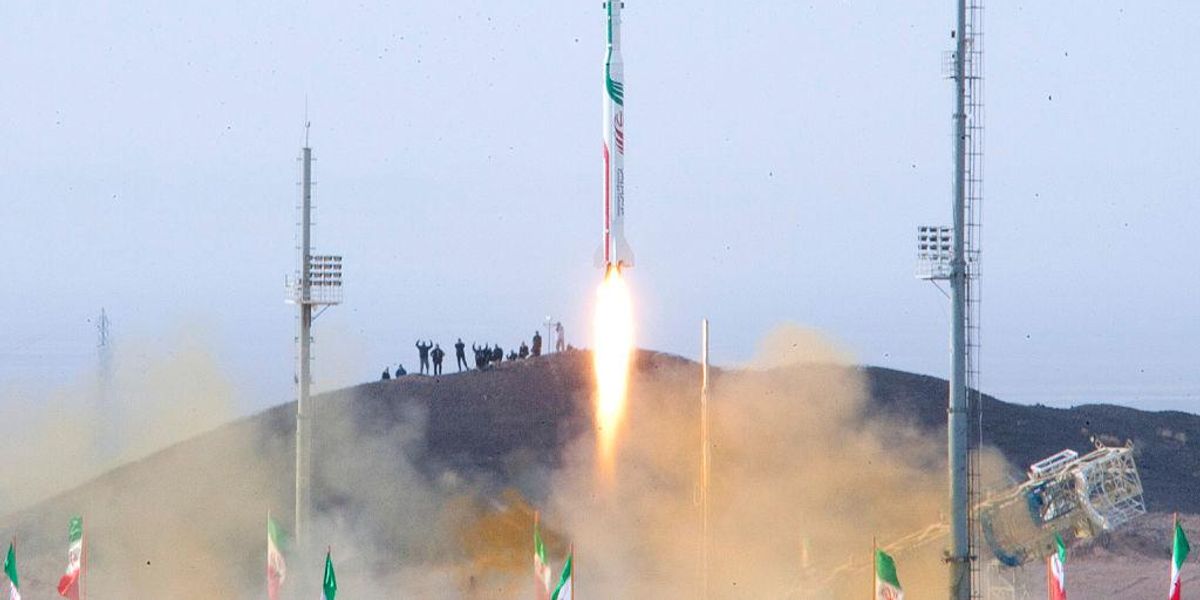 In the latest possible escalation of Iran’s nuclear ambitions, the country has launched a rocket into space, which was carrying ‘research devices’ according to Iranian state television. The launch drew condemnation and remarks of concern from a number of Western democracies, who are concerned that the launches violate U.N. Security Council resolutions and may represent a further dangerous continuation of Iran’s nuclear ambitions.

According to a report from ABC News, which translated the launch video, the white rocket in the video bore a legend which declared it the “Simorgh satellite carrier.” An Iranian spokesman claimed that the rocket “had launched the three research devices at an altitude of 470 km (290 miles) and at a speed of 7,350 metres per second,” according to Reuters.

It was not clear whether the rocket actually reached orbit, but according to Iranian state propaganda, “The intended research objectives of this launch were achieved.”

A spokesperson for the U.S. State Department told Reuters that the United States government was aware of the launch and stated that the launch defied a 2015 U.N. Security Council resolution. “The United States remains concerned with Iran’s development of space launch vehicles, which pose a significant proliferation concern.” The German government also condemned the launches, according to Reuters.

Under the administration of former President Donald Trump, the U.S. government sanctioned Iran’s space agency in 2019, claiming that the agency was, in fact, a cover for an intercontinental ballistic missile program. In a September 2019 statement, then-Secretary of State Mike Pompeo said, “The United States will not allow Iran to use its space launch program as cover to advance its ballistic missile programs.”

Iran’s space launch comes about a week after the country launched over a dozen ballistic missiles in a “warning to Israel” that drew sharp condemnation from the British government. The U.S. government did not comment on the ballistic missile launch immediately, but in the wake of the space launch, the State Department linked those launches to the space launch in a broader condemnation of Iran’s nuclear ambitions and violations of U.N. resolutions.

The United States is currently engaged in indirect talks with Iran in Vienna in yet another attempt to end Iran’s nuclear program with diplomacy.

The Left’s Flirtation With Homophobia
Whoopi Goldberg defends embarrassing Biden moment when he calls for politician who died a month ago
House Republicans push bill that would nix IRS funding from the ‘Inflation Reduction Act’ and reallocate it for CBP to hire agents to secure the southern border
Despite Ian’s devastation, Florida’s architecture displays shocking resilience
Alec Baldwin and others may face criminal charges over fatal on-set shooting, district attorney says in filing