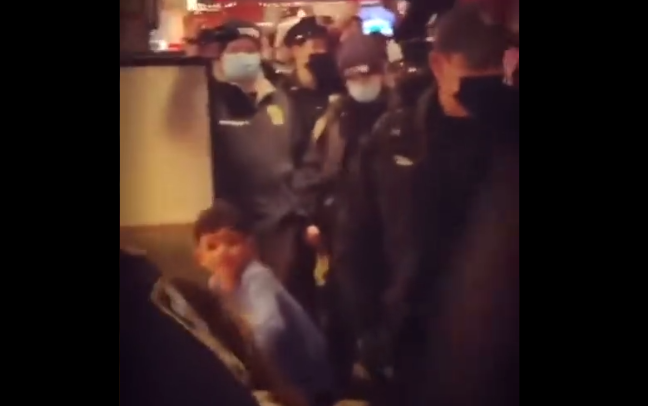 (Natural News)
For the “crime” of not being drugged up with a “vaccine” from Operation Warp Speed, a young boy and his mother were kicked out of a New York City restaurant by police.

Video footage of the incident that went viral shows New York Police Department (NYPD) officers approaching the table where the mother and child were seated to inform them that they had to leave unless they could produce the boy’s Wuhan coronavirus (Covid-19) injection pass (watch below).

NYPD kicks out a child for not having a vaccine passport.

Several people inside the restaurant expressed outrage over the scene, calling it “disgusting and gross” that the cops would scare, traumatize and ultimately terrorize and innocent young boy and his mother while they were trying to enjoy a meal.

The young boy, unsure of what to do or even what was happening, is seen in the footage being towered over by various adult figures, including other patrons at the restaurants who gathered around the table visibly upset.

While it is unknown exactly where the incident took place, reports suggest that it may have occurred at an Applebee’s location in Queens. The same area was recently in the news for an anti-jab protest that was held at the nearby Queens Center Mall.

Back in March, New York became the first state in the country to launch a Fauci Flu injection “passport” scheme.

Known as the “Excelsior Pass,” the program requires New Yorkers to either show proof of injection or a “negative” test for the Chinese Virus in order to attend large events or enter a restaurant.

New York City was the first place in the state, naturally, to later start enforcing a jab-only policy that no longer allows negative test results to suffice as a tool of entry.

“This will be your only warning,” an NYPD jackboot is further seen telling the woman and her child at the restaurant.

Had they not complied, the mother and son would have been arrested by the officer and charged with trespassing.

When asked about the incident, a spokesman for the NYPD refused to respond and instead started jabbering about an earlier protest at the same location. Apparently the NYPD is standing against the rights of its citizens and for the fascism of Bill de Blasio, Tony Fauci, and other Branch Covidian tyrants.

According to reports, New York City is requiring that all private businesses force their patrons to show proof of injection before entry. This includes all patrons as young as five years old.

“Meanwhile, a pedophile is raping a child and there are no cops stopping the crime because of petty BS like this!” wrote one angry commenter at Reclaim the Net.

“I’m pretty sure now how I’m going to die, and it’s not going to be from the vaccine or lack of food because I don’t have a vaxport,” wrote one at Natural News.

“This is all planned into the financial destruction,” wrote yet another about how these mandates are going to completely decimate what remains of the restaurant industry.

“They want to bring in Agenda 2030 and all independent businesses must be destroyed for that to happen. Rural people won’t be able to live without jobs and will be forced into the cities. That’s their plan, anyway. I have other plans.”

Many others expressed the fact that they will never again be returning to New York or the city for any reason whatsoever. There goes another nail into the coffin of the state’s small business economy.

The latest news about Wuhan coronavirus (Covid-19) “vaccine” tyranny can be found at Fascism.news.