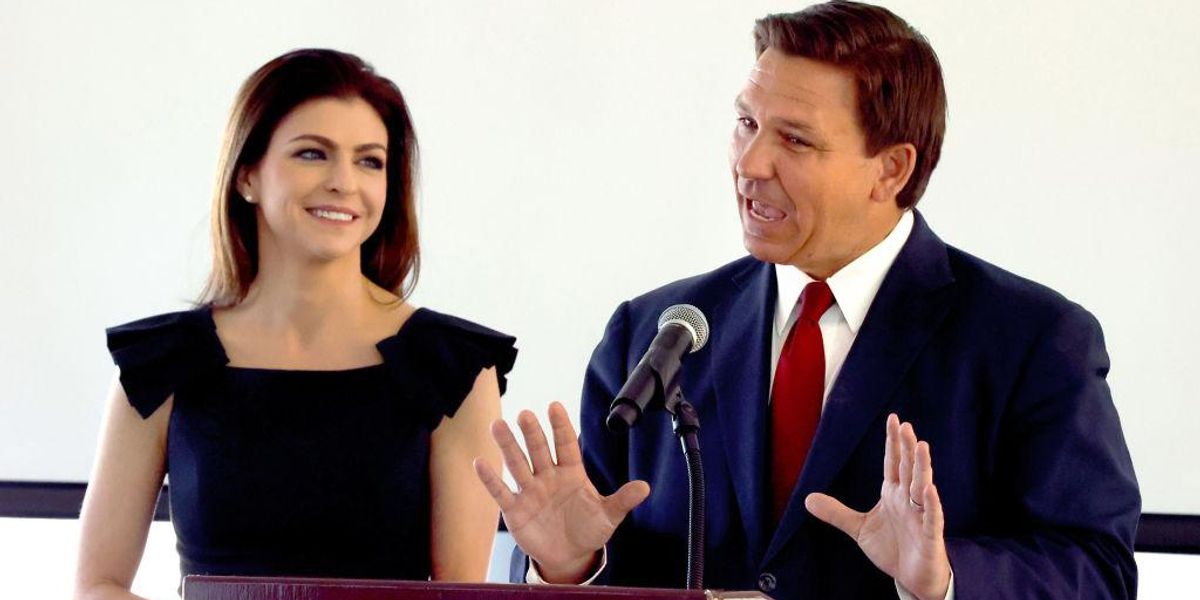 As the profile of Gov. Ron DeSantis has grown – mostly from bucking the pandemic restrictions that other governors have enforced – Democrat politicians, the corporate media, and liberals have targeted the Florida governor, even for taking his wife to cancer treatment. In what may be the most egregious and flimsy attack on the Republican governor yet, liberals attempted to dunk on DeSantis for using photos from the same photoshoot of their family on two different holidays. The frivolous affront backfired spectacularly.

Patriot Takes is a self-described “organization built to take on and expose the far-right disinformation machine” that pleads for donations to “allow our researchers to stay vigilant and monitor far-right platforms.”

On Sunday, the Patriot Takes Twitter account attacked DeSantis for the crime of his wife posting multiple family photos from the same photoshoot on different holidays to social media.

“Ron DeSantis’ family is wearing the exact same clothes in both their Christmas and New Year Instagram posts,” the account tweeted on Sunday.

The account beholden to Democrats called DeSantis a “phony” for “recycling the same family shoot photos for Thanksgiving, Christmas and New Years.”

Ron DeSantisu2019 family is wearing the exact same clothes in both their Christmas and New Year Instagram posts.pic.twitter.com/pctLYqnOKD

Unfortunately for Patriot Takes, their attack on DeSantis didn’t go the way they had anticipated and blew up in their face. The account was widely panned on social media by conservatives and liberals alike for the bizarre attempt to discredit the Florida governor for sharing multiple photos of his family. Many claimed that the Twitter account suffers from “DeSantis Derangement Syndrome” for concocting the cockamamie attempt at controversy.

Florida Republican vice chairman Christian Ziegler remarked on how difficult it is to get small children to dress up and smile for a photoshoot, “PHOTOGATE HAS COMMENCED. Btw – You clearly don’t have 3 kids under 5. My wife and I will be lucky to get 1 photo of all of them looking at camera, let alone with smilies, ALL YEAR.”

Fox News editor Emily Zanotti echoed that sentiment, “You try and get good pictures with dressed up toddlers and you’ll understand why you make the most out of one good photo shoot.”

Danielle Butcher – executive vice president of the American Conservation Coalition – quipped, “So they did a family photo session and liked more than one of the photos?? The horror.”

Brian Riedl – a senior fellow at the Manhattan Institute – pointed out, “Ron DeSantis is by no means immune to legitimate criticism, but he continues to attract the most over-the-top, clownish critics. Every 2-3 days there is another absurd ‘gotcha’ that falls flat on its face.”

Conservative commentator Matt Walsh teased, “Wow. This is horrifying. You mean to tell me that the DeSantis family took multiple photos during a photoshoot? This is unheard of. You have uncovered one of the great political scandals of all time. I am stunned.”

Attorney A.G. Hamilton sarcastically wrote, “You really got him now! They did a family photo shoot and keep using photos for it for different holiday occasions. Not sure how he will ever recover.”

Caleb Hull joked, “Ron DeSantis will never recover from this.”

Political strategist Michael Caputo blasted Patriot Takes, “You know why our family took our Christmas Card 2020 photo in September? Because I had cancer and we knew I’d look like hell in a month. These people are idiots and ghouls.”

One commentator brought up that Casey DeSantis is currently battling breast cancer, “Maybe they banked some photos because future first-lady Casey DeSantis is undergoing chemotherapy. Did that cross your mind?”

Abigail Marone – press secretary for Sen. Josh Hawley (R-Mo.) – opined, “You know DeSantis must be doing something right when the liberals are freaking out that he *checks notes* posted 2 pictures in the same outfit.”

MSNBC columnist Eric Michael Garcia tweeted, “C’Mon. If all the things to hit him on, that sounds ridiculous. Families take tons of family photos in advance.”

Another person jested, “You’re only supposed to wear clothes once and then throw them in an incinerator.”

USA Today contributor Daniel Darling advised, “If you care this much about a politician, left, right, or center, it might be time to re evaluate. New Years is as good a time as any.”

Looking ahead to 2022. Wishing you a happy, healthy, and fabulous New Year.pic.twitter.com/eAuCATnoVW