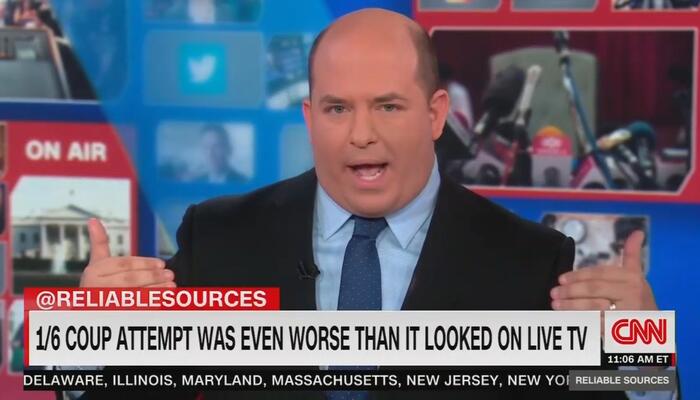 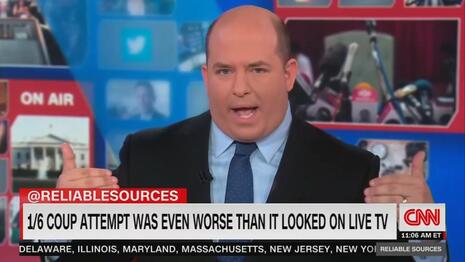 On the cusp of an absolute glut of liberal-media anniversary coverage of the January 6 riot, CNN media reporter Brian Stelter was cranky. “We live in a world where Donald Trump’s top supporters malign the media for being ‘obsessed’ with January 6.”

You don’t have to be a Trump supporter to see it. The media obsession with January 6 is easily quantifiable. Saying there’s not an obsession is like claiming the media didn’t do enough coverage of Princess Di’s car crash and funeral. The New York Times editorial board posted an article titled “Every Day Is Jan. 6 Now,” and the daily media coverage reflects that mentality.

You don’t have to be an election denier who thinks Trump won in a landslide to acknowledge it. But Stelter maligned everyone who thinks the pro-Biden media are overdoing 1/6 as a deranged kook: “We’re not a single story or smoking-gun confession or criminal charge away from snapping back to a shared reality. Instead, we’re experiencing something that might be best explained by psychologists or therapists or algorithm developers.”

As a media reporter, Stelter should understand that an emphasis is not a “reality.” Making something the “top story” for a year is an editor’s decision, and the coverage could be completely factual and still look like an “obsession.” Stelter is appalled by anyone who would “minimize” 1/6 – that is, anyone who doesn’t think it should be an everyday story.

The “shared reality” people didn’t even pause when their fellow liberal Matthew Dowd announced on MSNBC that casualty counts aside, “January 6 was worse than 9/11.” Stelter yawned. No “independent fact checker” gets involved. The wildest liberal exaggeration should be “shared reality.”

The reality here is the Democrats have become deeply invested in January 6 as a way to prevent losing their majorities in Congress on November 8. The House “select committee” on the riot was so selective that the Republican minority was not allowed to place anyone on it. No “minimizers” were allowed. Two Republicans who align with Speaker Pelosi’s “shared reality” were allowed. This makes the process incredibly partisan, but our incredibly partisan media treat this committee like it’s entirely objective…as they like to imagine that they are.

Stelter’s CNN will host a two-hour January 6 special, to be held in Congress’s Statuary Hall. The CNN press release announced anchors Jake Tapper and Anderson Cooper will be interviewing 12 Democrats and Liz Cheney. Their interviewees are just as balanced as the committee. No “minimizers.” Only the maximizers.

The reality here is January 6 has replaced Russian collusion as the media’s favorite anti-Republican narrative.  The players have changed, but it has all the same impulses – that Trump is a dangerous threat to democracy. The only difference is that the collusion narrative reflected the view that Trump’s 2016 election was illegitimate, and now Trump’s stubborn refusal to concede the 2020 election makes the charge of Trump hating democracy carry more weight.

The riot at the Capitol was a horrible event, and every thug and goon that beat a policeman should be prosecuted. But everyone knows that when thugs and goons tried to set a federal courthouse on fire in Portland with federal employees inside it last year, these self-appointed ”reality” definers didn’t find an “insurrection.” They have a double standard on violent revolts against the government…when the thugs are on the left.