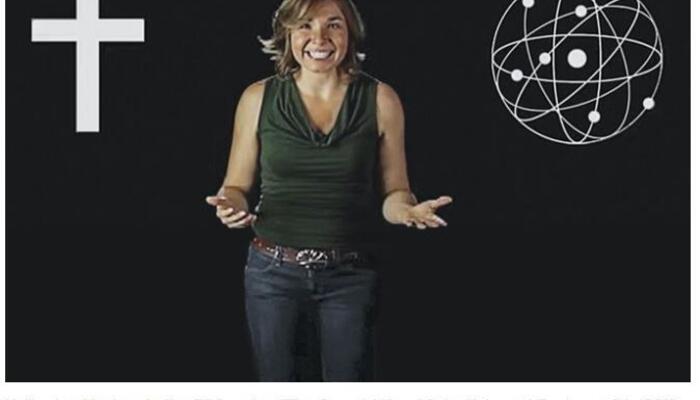 David Marchese is the “Talk” columnist for the New York Times Magazine, a convenient avenue for the newspaper to sneak in snobbish liberalism under the guise of “celebrity” interviews — the term clearly being loosely defined, as in the most recent round of conservative Christian-bashing: “An Evangelical Climate Scientist Wonders What Went Wrong.” (Photo from public television WGBH, via the NYT.)

Such is the grimly politicized state of science these days that the descriptors typically used to explain who Katharine Hayhoe is — evangelical Christian; climate scientist — can register as somehow paradoxical. Despite that (or, indeed, because of it), Hayhoe, who is 49 and whose most recent book is “Saving Us: A Climate Scientist’s Case for Hope and Healing in a Divided World,” has become a sought-after voice for climate activism and a leading advocate for communicating across ideological, political and theological differences….

Some of Marchese’s questions to Hayhoe are repeated below, in bold, with her answers following:

Where, if any, are there areas where you see a conflict between scientific consensus and your religious beliefs?

The biggest struggle I have is that in the Bible, Jesus says to his disciples, “You should be recognized as my disciples by your love for others,” and today when you look at people who self-identify as Christians in the United States, love for others is not one of the top characteristics you see. Christianity is much more closely linked with political ideology and identity, with judgmentalism, partisanship, science denial, rejection of responsibility for the poorest and most vulnerable who we, as Christians, are to care for….nowadays something like 40 percent of people who self-identify as evangelicals don’t go to church. They go to the church of Facebook or Fox News….

(The comment about Christian “science denial” wasn’t about biological males being identified as female, but instead led to a footnote complaining that an insufficient number of “white evangelical Protestants said that the earth was warming primarily because of human activity.”)

Marchese gave Heyhoe an opening to rip into her own church, and she took it with unseemly eagerness.

Doesn’t the argument that the evangelical church has been so totally co-opted by political ideology imply a sort of dim view of its followers’ ability to think critically for themselves?

Oh, totally. There was an article in The Atlantic by Peter Wehner that had a good comment from Alan Jacobs, a Baylor professor. He said churches are not catechizing. People might show up for one hour on a Sunday morning, and half of that is singing, and there’s some entertaining talking because they want to keep people coming in the door because that’s how you fill the coffers. Churches are not teaching and people are spending hours and hours on cultural and political content and that is what is informing our beliefs.

Of course, the conversation got around to Covid and Marchese’s interviewee doubled down on the liberal religion of mask-wearing.

….We think it’s possible to convince people to act rationally in their best interests: Well, look at people who, as they are dying, are rejecting the fact that they have Covid. Look at people who are still rejecting simple things like taking a vaccine and wearing masks….

In April 2021, Marchese interviewed Democratic Sen. Mazie Hirono. The headline tells you all you need to know about Marchese’s politics. “Sen. Mazie Hirono Wonders How Some Republicans Live With Themselves.”