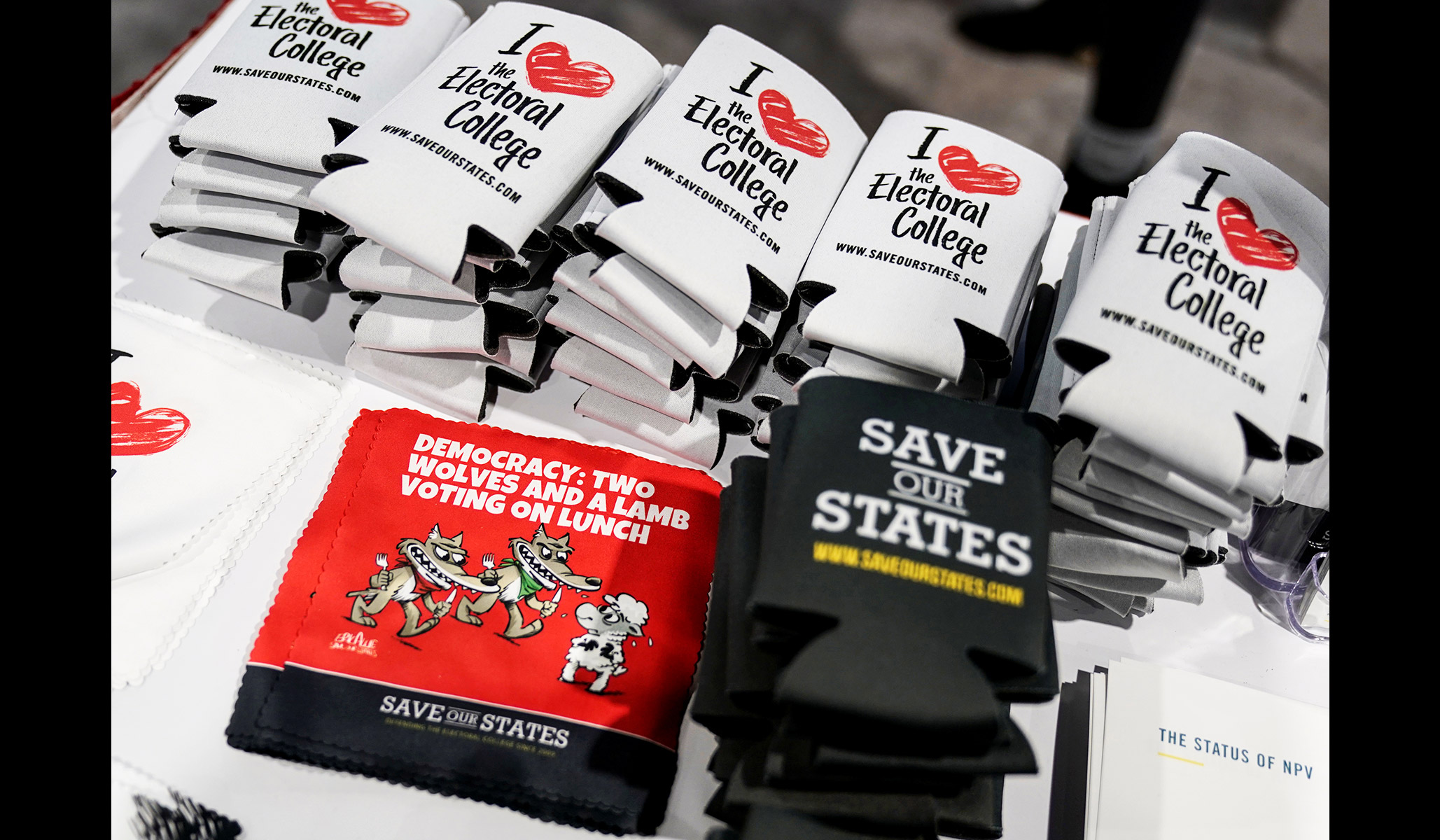 There are a number of issues with the overwrought New York Times “Every Day Is Jan. 6 Now” editorial, but let’s not gloss over its selective use of history. The Times, scrounging around in the attic for a safely dead Republican it could co-opt, picks our 23rd president, Benjamin Harrison:

This isn’t the first time state legislatures have tried to wrest control of electoral votes from their own people, nor is it the first time that the dangers of such a ploy have been pointed out. In 1891, President Benjamin Harrison warned Congress of the risk that such a “trick” could determine the outcome of a presidential election. The Constitution guarantees to all Americans a republican form of government, Harrison said. “The essential features of such a government are the right of the people to choose their own officers” and to have their votes counted equally in making that choice. “Our chief national danger,” he continued, is “the overthrow of majority control by the suppression or perversion of popular suffrage.” If a state legislature were to succeed in substituting its own will for that of its voters, “it is not too much to say that the public peace might be seriously and widely endangered.”

The irony here is rich, because as I’ve detailed before in discussing the 1892 election, Harrison’s presidency was many of the things that Democrats deplored during the Trump years. Harrison won the Electoral College in 1888 despite losing the popular vote, mainly because the incumbent he defeated, Grover Cleveland, rolled up a lopsided 61 percent to 37 margin in the former Confederate states, where the ruling Democrats had ruthlessly suppressed the (solidly Republican) black vote. In other words, Harrison won because, like Donald Trump in 2016, his appeal was geographically broad while his opponent’s appeal was more regionally intense. Harrison then filled four Supreme Court seats during his single term, one in the summer of the election year of 1892, and one in the lame-duck session after he lost re-election. For that matter, Harrison and the Republicans retaliated against the Democrats’ lockdown of the South by rushing the admission of six new Western states: North Dakota, South Dakota, Montana, Washington, Idaho, and Wyoming. It was an era of political hardball on both sides of the aisle in a nation where the margins were close and neither party could command a legitimate national majority for over two decades between the 1872 and 1896 elections.

Anyway, what the Times doesn’t mention is what Harrison was warning about in 1891: It wasn’t states taking away the popular vote, but states trying to undermine the Electoral College. The Times quotes from Harrison’s 1891 State of the Union message (delivered in writing in those days) in December of that year, in which Harrison was agitated by Michigan’s switching to apportioning its electoral votes by congressional district. That is the system presently used in Maine and Nebraska (unwisely so, in my view) and sometimes suggested by partisans unhappy with their own state’s tilt. Michigan was, in 1891, one of the mainstays of the Republican base — it had not voted for a Democrat since 1852, and would not again until 1932 — but Democrats took over the state in the 1890 midterm and implemented a novel scheme to divide its electoral votes by House districts.

Harrison’s extended denunciation of this scheme — which was upheld by the Supreme Court the following October in McPherson v. Blacker — is a defense of the Electoral College system of statewide elections that progressives these days habitually denounce, and a defense as well of traditional practice as a guide to the conduct of American elections. Harrison even argued for amending the Constitution to prevent revisions to the traditions that had been established by longstanding use:

The method of appointment by the States of electors of President and Vice-President has recently attracted renewed interest by reason of a departure by the State of Michigan from the method which had become uniform in all the States. Prior to 1832 various methods had been used by the different States, and even by the same State. In some the choice was made by the legislature; in others electors were chosen by districts, but more generally by the voters of the whole State upon a general ticket. The movement toward the adoption of the last-named method had an early beginning and went steadily forward among the States until in 1832 there remained but a single State (South Carolina) that had not adopted it. . . . For nearly sixty years all the States save one have appointed their electors by a popular vote upon a general ticket, and for nearly thirty years this method was universal.

After a full test of other methods, without important division or dissent in any State and without any purpose of party advantage . . . the practice of all the States was brought into harmony. That this concurrence should now be broken is, I think, an unfortunate and even a threatening episode, and one that may well suggest whether the States that still give their approval to the old and prevailing method ought not to secure by a constitutional amendment a practice which has had the approval of all. The recent Michigan legislation provides for choosing what are popularly known as the Congressional electors for President by Congressional districts and the two Senatorial electors by districts created for that purpose. This legislation was, of course, accompanied by a new Congressional apportionment, and the two statutes bring the electoral vote of the State under the influence of the “gerrymander.” . . . These methods have already found effective application to the choice of Senators and Representatives in Congress, and now an evil start has been made in the direction of applying them to the choice by the States of electors of President and Vice-President. If this is accomplished, we shall then have the three great departments of the Government in the grasp of the “gerrymander,” the legislative and executive directly and the judiciary indirectly through the power of appointment.

An election implies a body of electors having prescribed qualifications, each one of whom has an equal value and influence in determining the result. So when the Constitution provides that “each State shall appoint” (elect), “in such manner as the legislature thereof may direct, a number of electors,” etc., an unrestricted power was not given to the legislatures in the selection of the methods to be used. “A republican form of government” is guaranteed by the Constitution to each State, and the power given by the same instrument to the legislatures of the States to prescribe methods for the choice by the State of electors must be exercised under that limitation. The essential features of such a government are the right of the people to choose their own officers and the nearest practicable equality of value in the suffrages given in determining that choice.

It will not be claimed that the power given to the legislature would support a law providing that the persons receiving the smallest vote should be the electors or a law that all the electors should be chosen by the voters of a single Congressional district. The State is to choose. . . . It is not my purpose here to discuss the question whether a choice by the legislature or by the voters of equal single districts is a choice by the State, but only to recommend such regulation of this matter by constitutional amendment as will secure uniformity and prevent that disgraceful partisan jugglery to which such a liberty of choice, if it exists, offers a temptation.

Nothing just now is more important than to provide every guaranty for the absolutely fair and free choice by an equal suffrage within the respective States of all the officers of the National Government, whether that suffrage is applied directly, as in the choice of members of the House of Representatives, or indirectly, as in the choice of Senators and electors of President. Respect for public officers and obedience to law will not cease to be the characteristics of our people until our elections cease to declare the will of majorities fairly ascertained without fraud, suppression, or gerrymander. If I were called upon to declare wherein our chief national danger lies, I should say without hesitation in the overthrow of majority control by the suppression or perversion of the popular suffrage. That there is a real danger here all must agree; but the energies of those who see it have been chiefly expended in trying to fix responsibility upon the opposite party rather than in efforts to make such practices impossible by either party.

. . . All the States have, acting freely and separately, determined that the choice of electors by a general ticket is the wisest and safest method, and it would seem there could be no objection to a constitutional amendment making that method permanent. If a legislature chosen in one year upon purely local questions should, pending a Presidential contest, meet, rescind the law for a choice upon a general ticket, and provide for the choice of electors by the legislature, and this trick should determine the result, it is not too much to say that the public peace might be seriously and widely endangered.

Harrison was also critical of gerrymandering in general — and in particular, the pre-Baker v. Carr practice of districts of unequal population — and it is notable that, already in 1891, he described the arguments over gerrymandering as “that interminable and inconclusive debate.” Still, the Times is wide of the mark in quoting Harrison as if he were talking about electors chosen by legislatures themselves (although he clearly would have supported an amendment to codify the statewide popular vote as the method of choosing electors). And he said nothing against the major McPherson v. Blacker argument today by conservatives that the state legislatures get to decide how their statewide presidential elections are conducted. Still, I welcome the Times. If we can all agree with Benjamin Harrison that presidents should be chosen by 50 statewide popular votes filtered through the traditional mechanism of the Electoral College, so much the better. And the amendment recommended by Harrison would be fine with me.

RED SHIFT: 162 Scientists who used to work for a top US nuclear research base now work for the CCP
Colbert Wonders ‘How Big of an A-Hole Is Ron DeSantis?’
Trending Search in Russia: ‘How to Break Your Arm at Home’
‘Unwoke’ With Kevin and Kruiser #48: We’re Back and We’re Spectacular!
Florida asks Supreme Court to decide whether Big Tech companies can claim First Amendment right to censor users