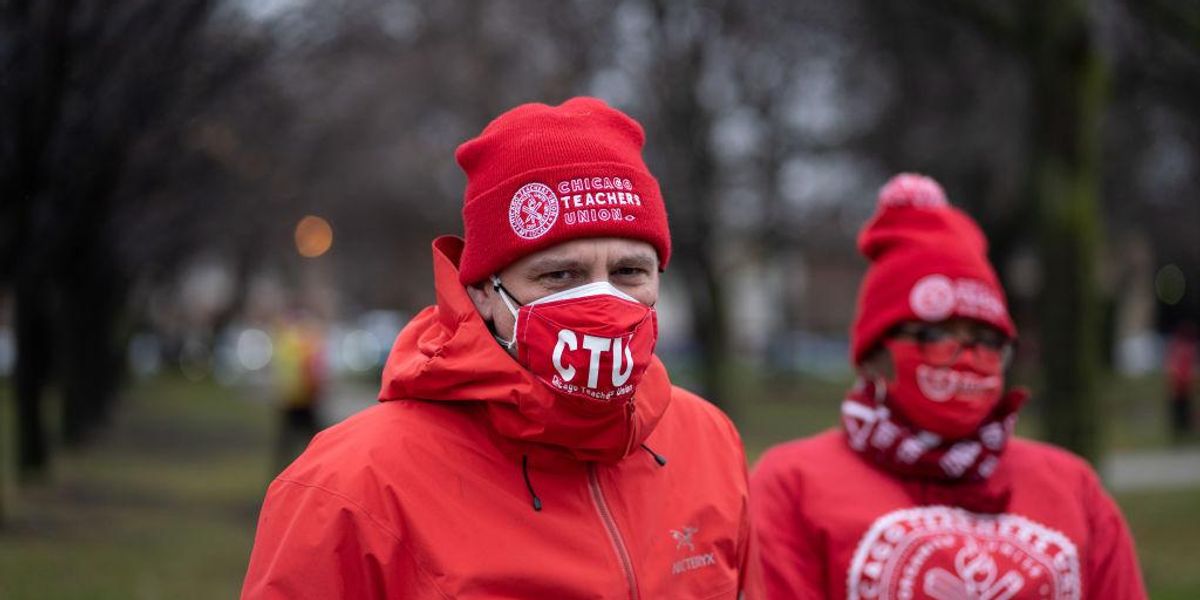 Chicago Teachers Union President Jesse Sharkey held firm to his organization’s demands over the weekend, prompting classes in the Windy City to be canceled for the fourth consecutive day on Monday. In his defiance, the union leader even called the city’s mayor “relentlessly stupid” for asking teachers that teachers return to work.

The nation’s third-largest teachers’ union has been in a renewed standoff with political leadership since last week, its more than 25,000 members encouraged not to return to in-person classes until stringent health and safety rules are implemented.

Its desired rules include large-scale COVID-19 testing and KN95 mask-wearing as well as the establishment of thresholds for districts to shift to fully remote classes in accordance with citywide positivity rates, rather than positivity rates within the individual districts.

City leadership has so far refused to give in to the radical demands, calling them “noise” and “misinformation” intended only to scare parents. Chicago Public Schools CEO Pedro Martinez insisted last week that “there is no evidence that our schools are unsafe.”

Democratic Chicago Mayor Lori Lightfoot, too, has called out union leaders for “politicizing the pandemic” and claimed there “is no basis in the data, the science, or common sense for us to shut an entire system down when we can surgically do this at a school level.”

During an appearance on NBC’s “Meet the Press” Sunday, Lightfoot characterized the union’s latest actions as an “illegal walkout,” adding about participating teachers, “They abandoned their posts and they abandoned kids and their families.”

But in a press conference Monday morning, Sharkey fired back at Lightfoot, accusing the mayor of being “relentlessly stupid” in her dealings with the union.

“We feel like we’re at a point where we don’t have enough at the table to be able to go back to the people who, frankly, have sacrificed a lot at this point, and confidently say, ‘This is something that can help us ensure our safety,’” Sharkey said, according to the Chicago Sun-Times. “The mayor is being relentless, but she’s being relentlessly stupid, relentlessly stubborn.”

In a statement issued on Sunday, the union said, “Educators are not the enemy Mayor Lightfoot wants them to be.”

“The mayor is saying she is going to be relentless in prosecuting a case, but the mayor is not a prosecutor and I’m not a criminal being prosecuted,” Sharkey similarly stated in the press conference. “Our members are not people who’ve done anything wrong.”

But Sharkey’s last claim certainly rings hollow with city leadership, which views the union’s walkout as overt disobedience. As such, Chicago Public Schools has threatened that teachers who fail to show up for in-person classes will be placed on “no-pay status” until they return.

“I hear the mayor say that she doesn’t want to do remote. But honestly, that’s just a talking point, it’s an idea, ‘remote is bad.’ Remote education is a tool. Teachers view remote education, yeah, it’s not as good as in-person,” he said, comparing the need for remote learning during the pandemic to the option of using it during winter blizzards.

But the city knows that in-person instruction is the goal and has rolled out a plan to get students safely back in classrooms. According to the Associated Press, school leaders have touted a $100 million safety plan, which encourages teachers to get vaccinated, requires masks indoors, and includes air purifiers in each classroom.

The plan is apparently not enough for union members, who claim teachers are being unfairly asked to risk their health and safety by showing up to work.

Sadly, amid the escalating war of words and continued standoff, Chicago students and parents are the ones truly suffering.

A survey published in April by the Children’s Hospital of Chicago found that “across the board, caregivers reported significantly worse psychological well-being [for the children in their care] after school closures as compared to before.”

US facing natural gas shortage due to record LNG exports to Europe
Democrats Sharpen Claws, Prepare to Politicize Hurricane Ian Against DeSantis
Florida Man Friday: The Heroes of Hurricane Ian
President Trump Says that Mitch McConnell Has a “DEATH WISH” By Backing Insane Dem Spending Bills
Am I The Only One Who Remembers When Dictionaries Were the Authority on Words?