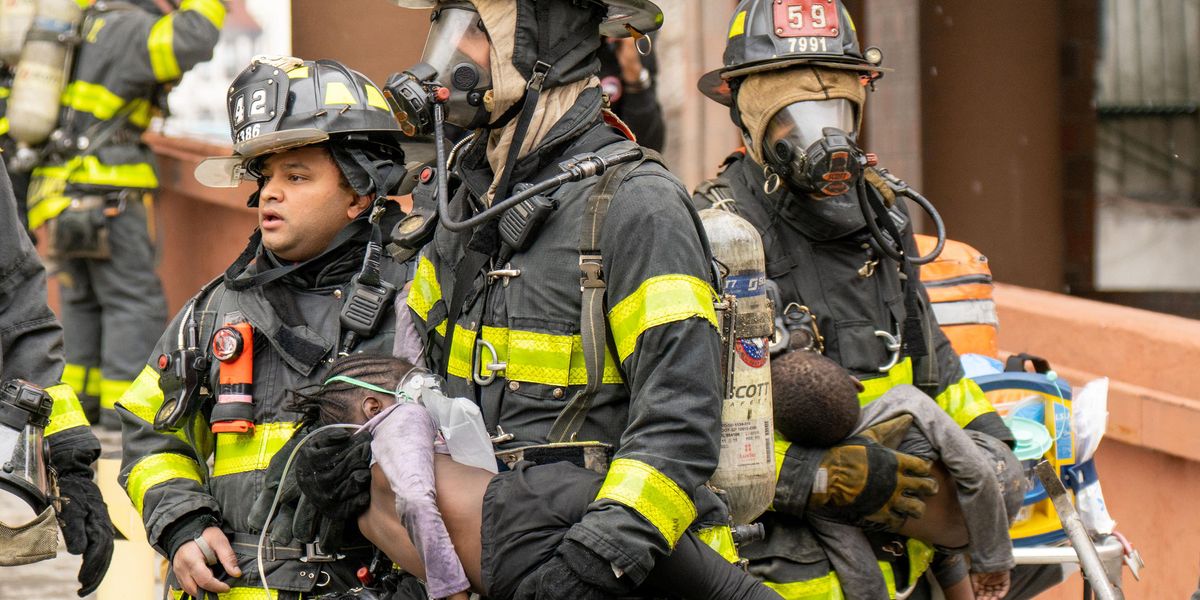 A space heater is believed to have
started the deadly blaze at a Bronx, New York, apartment complex, claiming the lives of at least 19 residents including nine children.

The fire broke out on Sunday after an electric space heater was said to have malfunctioned in a bedroom of a unit inside the building.

New York City Fire Commissioner Daniel Nigro on Sunday said that at least 63 people were injured by “severe smoke inhalation” and 32 were sent to five area hospitals in life-threatening condition.

The apartment door to the unit was left open as its occupants fled, allowing the fire to spread.

“The smoke spread throughout the building, thus, the tremendous loss of life and other people fighting for their lives right now in hospitals all over the Bronx,” he said. “So, we are investigating where everyone was found, how the smoke traveled, but certainly the marshals have determined through physical evidence and through firsthand accounts by the residents that this fire started in the bedroom, in a portable electric heater.”

The fire prompted approximately 200 city firefighters to rush to the 19-story, 120-unit apartment building in order to extinguish the deadly blaze.

Nigro said that they discovered “victims on every floor in stairways.”

“It was a very difficult job for our members,” he said. “Their air tanks contained a certain amount of air — they ran out of air, many of our members — and they continued working to try to get as many people out as they could.”

“This is a horrific, horrific, painful moment for the city of New York, and the impact of this fire is going to really bring a level of just pain and despair in our city,” said New York City Mayor Eric Adams.

Adams added that some of the fire’s victims include some belonging to a largely Muslim community and immigrants from Gambia.

“We have a law here in NYC that requires doors to close automatically,” Adams said during a Sunday press conference on the devastation. “We also want to double down on that PSA that I recall as a child … close the doors.”

Investigators are working to determine any possible issue with the building’s fire alarms and with its self-closing fire doors, which are specifically designed to contain fire to prevent it from spreading.

Daisy Mitchell — who lives on the building’s 10th floor — said that her husband first noticed the smoke and fire.

“The alarm was going off for a while so I didn’t pay it no mind,” she said. “Then, when he opened the door and I went out there, I passed out — it was devastating, it was like really scary. … I went to the stairs, I opened the door, it just blew me back [to] the house. If I’d stayed out there for another three seconds, I would have been gone too.”

Fellow 10th-floor resident Chanasia Hunter said that the fire alarms in the building are constantly going off.

“So, when you don’t know that it’s a fire, like, you know, how would you supposed to know if it’s a fire or if it’s always going off?” Hunter said, noting that she only realized that there was a dangerous fire in the building when a third-floor resident called her warning her about the blaze.

Resident Sandra Clayton told the Associated Press that she grabbed her dog Mocha and tried to flee the building with the animal tucked in her arms, but stumbled in the darkness and Mocha slipped from her grasp.

“I just ran down the steps as much as I could but people was falling all over me, screaming,” Clayton recalled.

Her beloved pet was later discovered dead in the stairwell.

Dismembered body found in two suitcases in Brooklyn apartment. Neighbors say the tenant had been in an abusive relationship.
‘We share a very special friendship’: Aussie football captain and water boy with special needs celebrate together after title win
16-year-old girl screams for help when man on parole allegedly tries to sexually assault her in grocery store restroom — then customers, employees come to her rescue
Sorry, Boy Scouts—or Whatever You’re Calling Yourself These Days. I Refuse to Support Your Fundraisers Anymore.
Autopsy Reveals That Country Music Singer Luke Bell Died Of Fentanyl Overdose In Tucson, Arizona