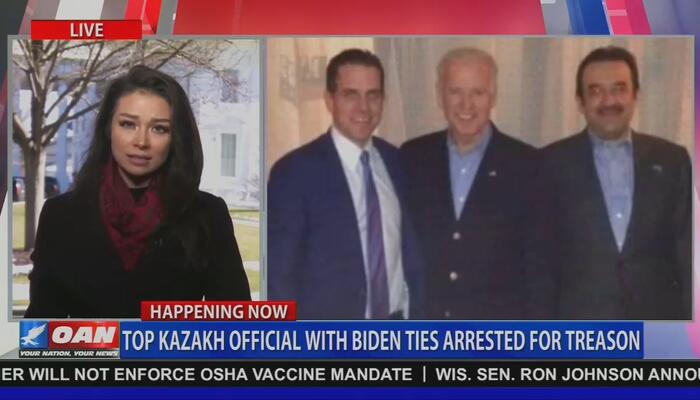 A close friend of President Joe Biden’s son Hunter was charged with treason in Kazakhstan according to a report in the Washington Examiner. Despite this revelation, all three evening news broadcasts ignored the report, while One America News was the only cable television network to report on the incident at the time of publication.

Karim Massimov, who Hunter Biden once referred to as his “close friend” in a 2016 email, is a former Kazakhstan intelligence chief, and former chairman of the Kazakhstan National Security Committee before being fired and tried for treason during violent protests caused by a spike in gas prices in the region. Massimov had a close business relationship with Biden while serving on the board of the Ukrainian energy company Burisma. During this time Massimov was serving as Prime Minister of Kazakhstan.

During his stint as Prime Minister, Massimov met with Biden to work on an energy deal for Burisma. What makes this story even more worthy of network coverage is the fact that Joe Biden has been pictured with Massimov and his son Hunter while he was a sitting Vice President.

What’s worse is according to the Washington Examiner “emails among Hunter Biden, his Rosemont Seneca business partner and fellow Burisma board member Devon Archer, and Ukrainian Burisma official Vadim Pozharskyi show their desire to work out a deal with Massimov.”

As a result, a “Republican Senate report on Hunter Biden’s foreign business dealings highlighted that Rakishev wired $142,300 to a company owned by Archer in 2014, the same day Joe Biden met with the Ukrainian prime minister and Ukrainian lawmakers to discuss Russia’s actions in the Crimean Peninsula.” The Examiner clarified that “Rakishev wired the funds purportedly for a car. However, the Senate report said the timing of the transfer raises serious questions.”

You can bet that if Donald Trump Jr.’s close friend was charged with treason in a foreign country the network newscasts would be all over this.

This classic case of the liberal news networks covering for their friends in the Biden White House was brought to you by Capital One (NBC), Progressive (CBS), and Allstate (ABC). Their information is linked so you can let them know about the biased news they fund.