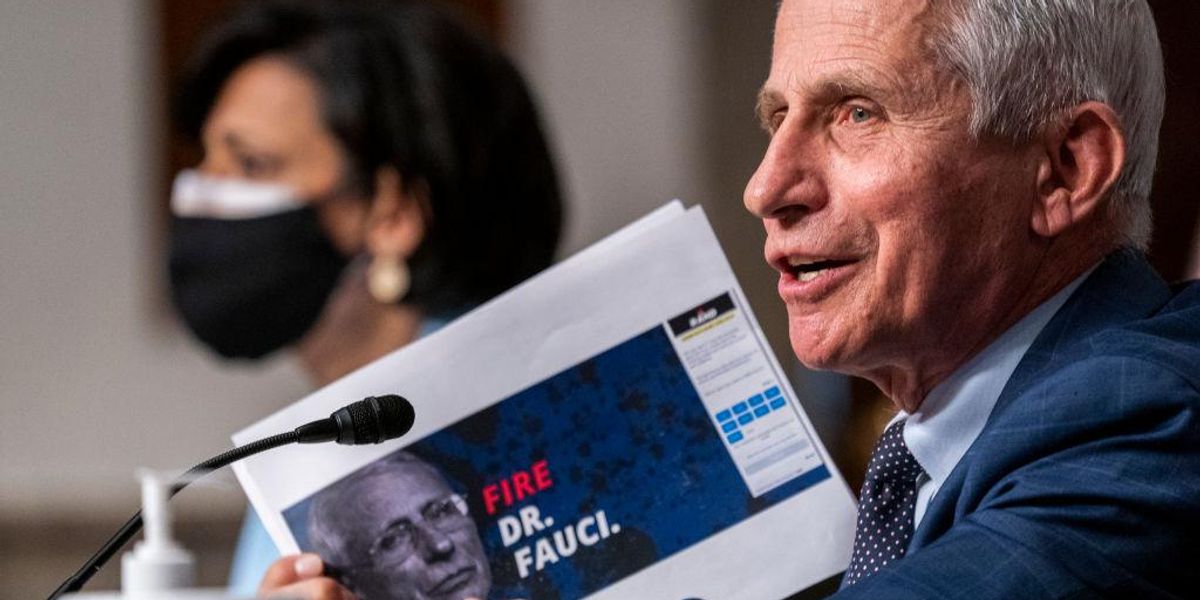 Dr. Anthony Fauci and Sen. Rand Paul (R-Ky.) got into another tense exchange on Capitol Hill Tuesday when Paul accused the White House’s chief medical adviser of conspiring to discredit scientists who disagreed with his opinions on COVID-19. Fauci in turn accused Paul of “distorting” everything about him and inspiring threats and harassment against him and his family.

“Dr. Fauci, the idea that a government official like yourself would claim unilaterally to represent science and that any criticism of you is criticism of science itself is quite dangerous,” Paul said. “Central planning, whether it be of the economy or of science, is risky because of the fallibility of the planner.”

The Kentucky Republican said that as a government official “who rules by mandate” Fauci’s “errors” compound and harm millions of Americans. He said Fauci used government resources “to smear and to destroy the reputations of other scientists who disagree with him.” Paul quoted from an email former National Institutes of Health Director Francis Collins sent to Fauci ordering him to carry out a “quick and devastating takedown” of a statement by public health experts calling for “focused protection” of the most vulnerable people to COVID-19. Fauci referred to the public health experts as “fringe” in that email.

A clearly annoyed Fauci said that Paul, “in usual fashion,” was “distorting everything about me.”

The two spent several minutes talking over one another, each growing angrier as time went on. Fauci accused Paul of using “personal attacks” against him that “have no relevance to reality.”

“You accuse me of, in a monolithic way, telling people what they need to do. Everything that I’ve said has been in support of the CDC guidelines: Wear a mask, get boosted,” Fauci said.

“So I would like to make something clear to the committee. He’s doing this for political reasons,” Fauci added, an accusation to which Paul vocally objected and the two began talking over each other again.

After the committee chairwoman interrupted the back-and-forth, Fauci complained about Paul’s behavior and claimed that at the last hearing Paul had suggested he was “responsible for the death of 4 to 5 million people, which is really irresponsible.”

“What happens when he gets out and accuses me of things that are completely untrue is that all of the sudden that kindles the crazies out there, and I have threats upon my life, harassment of my family, and my children with obscene phone calls because people are lying about me,” Fauci said.

He referred to the December arrest of 25-year-old Kuachua Brillion Xiong, a California resident who was found to have a “hit list” with Fauci’s name on it when he was pulled over on Interstate 80 in Iowa, the New York Post reported.

“They found in his car an AR-15 and multiple magazines of ammunition,” Fauci said, “because he thinks that maybe I’m killing people.”

He held up printouts of a fundraising page from Paul’s campaign website that urges people to donate in order to “Fire Dr. Fauci,” accusing Paul of “making a catastrophic epidemic for your political gain.”

Responding later, Paul said Fauci’s implication that Paul was responsible for the threats against him was “insulting.”

“This is the kind of ignorant, sort of personal attacks that you’ve engaged in. You engaged these attacks with fellow scientists.” – Rand Paul hits back at Dr. Anthony Fauci blaming him for threats from “crazies.”pic.twitter.com/7lm2QjyL5l

“Dr. Fauci, it’s disappointing for you to suggest that people who dare to question you are responsible somehow for violent threats. Realize that by attacking me, you’re attacking the one member who actually has suffered from violent attacks,” Paul said, recounting his experience at the 2017 Congressional Baseball Shooting.

“For you to somehow suggest that somehow I or people who dare to oppose you are responsible for threats, that’s insulting. The person who shot at us and almost killed [Rep. Steve Scalise (R-La.)] was a rabid supporter of Bernie Sanders. But the one thing you’ll find if you look at the record is that not one of us accused Bernie Sanders of being responsible for that,” he continued.

“So this is the kind of ignorant sort of personal attacks that you engaged in. You engaged in these attacks with fellow scientists.”