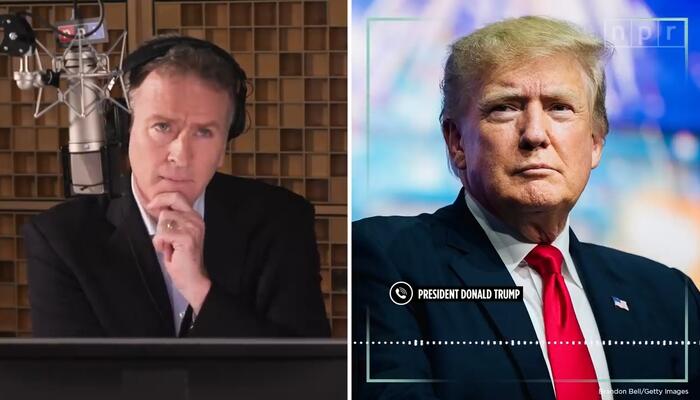 In his first presidential campaign and during his presidency, Donald Trump was interviewed by many liberal outlets but he never granted an interview to NPR and PBS. He understood that he was running as a populist and they are elitist channels. They’re taxpayer-funded, but sound like they’re Democrat-owned.

That streak just came to an end as Trump granted an interview Tuesday to NPR morning anchor Steve Inskeep. They planned a 15-minute interview – and Trump ended it at nine minutes. Inskeep began by asking Trump about the coronavirus and vaccines, but soon shifted into a battery of inquiries about the 2020 election and how Trump has not been able to prove he somehow won in a landslide. That went on long enough that Trump decided he had said enough:

As the @NPRinskeep interview with Trump winds down, you can see the host doesn’t see the hangup coming. He’s used to providing long sugary sit-downs with Obama. Republicans get the opposite. pic.twitter.com/TCkv98qiJ2

INSKEEP: If you’ll forgive me, maybe because the election was about you. If I can just move on to ask, are you telling Republicans in 2022 that they must press your case on the past election in order to get your endorsement? Is that an absolute?

There are two takeaways from Inskeep’s presidential interviews:

1. For the most part, Steve Inskeep’s questions to Trump were hardballs, but fact-based hardballs. Other than nudging Trump that the election was all about him — as if the pro-Biden media didn’t run it that way? — he didn’t lecture Trump. He presented quotes and information to Trump. Full transcript here.

2. For the most part, Steve Inskeep’s many “unusually relaxed” interviews with Obama offered softballs. His overall record remains tough on Republicans, soft on Democrats. See Inskeep’s gush over radical-left failed Biden nominee Soule Omarova. Then see him get offended when a pro-life guest used the word “abortionist.”

Some media reporters sunk into silliness about Trump granting this shortened interview.

It is exceedingly rare for Trump to talk to any broadcaster who isn’t a MAGA media loyalist. It basically never happens. And the reason is obvious… https://t.co/t7dKCYI4Z4

What? “It basically never happens?” Lesley Stahl? Lester Holt? Long nasty town hall with Savannah Guthrie? Stelter should tell us how many interviews Biden has granted to conservative media. Trump has obviously granted more interviews to liberal media over his presidency than Biden has been doing. President Biden has not granted an interview yet to NPR or PBS. But we can guess it will be soft whenever it arrives.

Column: CBS Is Not ‘Going Rogue’ on January 6 Committee
Why Can’t All Republicans Be More Like Ron DeSantis?
There in Spirit: Nets Bury Biden Looking for Dead Congresswoman During Speech
Biden personally thanks Coast Guard hurricane hero who will be fired in a matter of days because of president’s vaccine policy
Pharmaceutical company agrees to settle for $900M to resolve allegations it provided kickbacks to physicians and submitted false claims