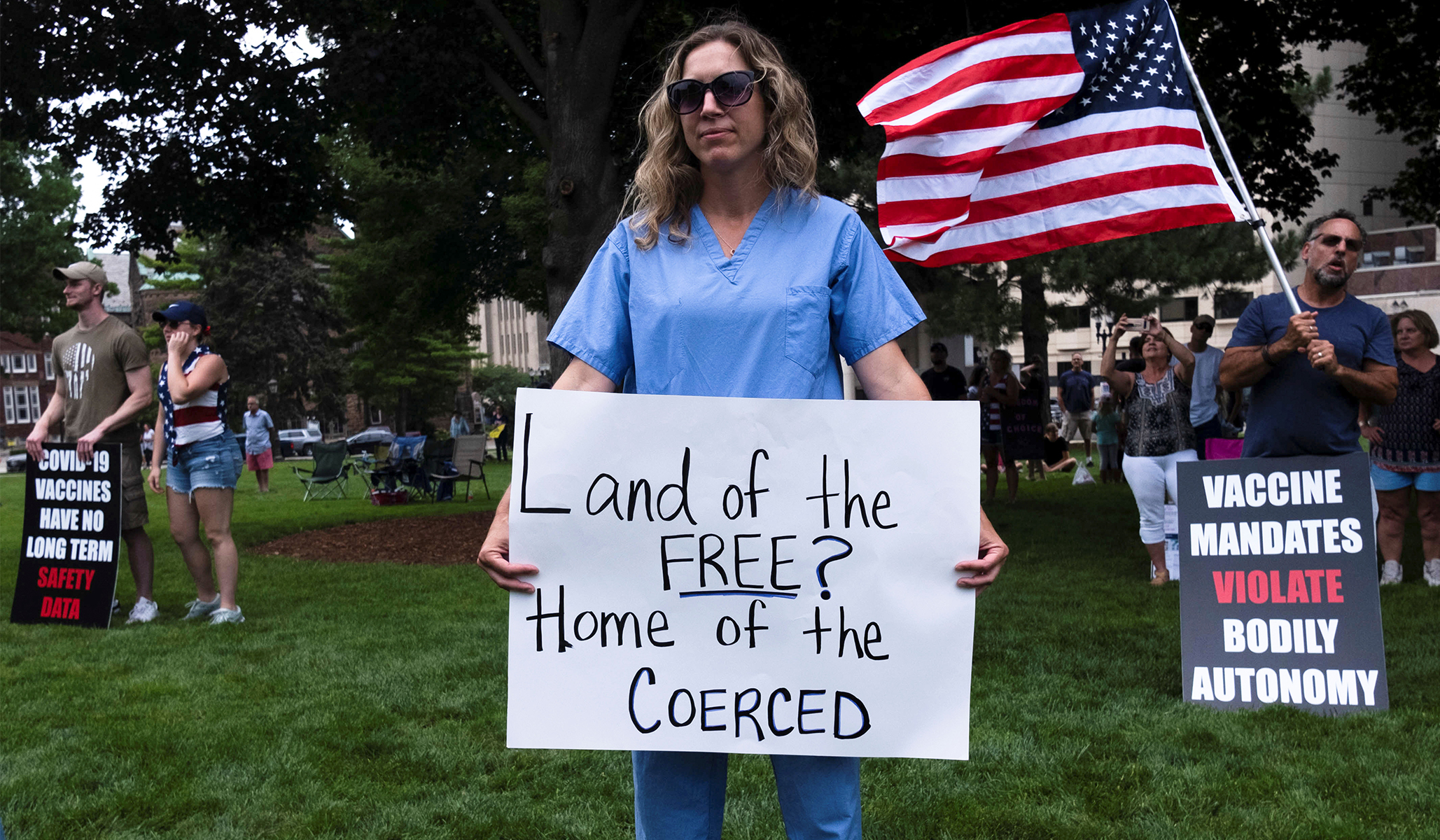 Today the Court handed down decisions on injunctive relief in two cases involving vaccine mandates. In National Federation of Independent Business v. Department of Labor, which involved the more sweeping regulation, the Court stayed OSHA’s emergency temporary standard (“ETS”)—which required companies with 100 or more employees to require workers to be vaccinated or wear a mask and submit to weekly tests—noting that it was neither a workplace regulation nor an emergency.

OSHA was engaging in nothing short of a power grab, and the Court was correct to reject it. Recall that White House Chief of Staff Ron Klain recognized via his retweet several months ago that this was “the ultimate work-around” for the federal government to require vaccinations en masse.

The Court’s 6–3 per curium opinion rightly observed that OSHA’s ETS was no “everyday exercise of federal power,” and there was no justifiable ground for OSHA to bypass the normal rulemaking procedure. As “creatures of statute,” federal agencies “possess only the authority that Congress has provided,” and Congress must “speak clearly when authorizing an agency to exercise powers of vast economic and political significance.”

The underlying statute, the Occupational Safety and Health Act, plainly empowers the agency “to set workplace safety standards, not broad public health measures.” The Court observed that Covid “is not an occupational hazard in most” workplaces. It spreads “at home, in schools, during sporting events, and everywhere else that people gather. That kind of universal risk is no different from the day-to-day dangers that all face from crime, air pollution, or any number of communicable diseases.” OSHA’s approach to regulation was “indiscriminate,” because it “fails to account for this crucial distinction—between occupational risk and risk more generally.”

In short, the majority noted, “It is telling that OSHA, in its half century of existence, has never before adopted a broad public health regulation of this kind—addressing a threat that is untethered, in any causal sense, from the workplace.”

Justice Gorsuch wrote a concurring opinion joined by Justices Thomas and Alito that reinforced the Court’s opinion in terms of the “major questions doctrine,” by which Congress must speak clearly when assigning decisions of vast significance to agencies. Noting its relationship to the nondelegation doctrine, Gorsuch asserted that this doctrine “guard[s] against unintentional, oblique, or otherwise un­likely delegations of the legislative power.”

That concurrence addressed the question of who decides such a momentous issue, a point that had dissenting Justices Breyer, Sotomayor, and Kagan bemoaning the lack of deference by the Court, whose “Members are elected by, and accountable to, no one.” Keep that concession in mind the next time they try to override legislatures with new judicial inventions spun out of whole cloth. As Gorsuch pointed out, the Court was justified precisely by its respect for “state and local governments across the country and the people’s elected representatives in Congress” as the proper decisionmakers.

Unfortunately, the second decision handed down today, Biden v. Missouri, upheld the Centers for Medicare and Medicaid Services (CMS) vaccine mandate that applies to nearly all health care workers, despite the similar absence of clear statutory authorization. This time the vote was 5–4. It was disappointing to see Justice Kavanaugh, along with Chief Justice Roberts, join the Court’s per curiam opinion.

Justice Thomas explained in his dissent, joined by Justices Gorsuch, Alito, and Barrett: “Had Congress wanted to grant CMS power to impose a vaccine mandate across all facility types, it would have done what it has done elsewhere—specifically authorize one.” Justice Alito wrote another dissent rebuking CMS for “its departure from ordinary” notice-and-comment rulemaking “after extraordinary delay,” taking a “regulate first and listen later” approach when it “put more than 10 million healthcare workers to the choice of their jobs or an irreversible medical treatment.”

We are now seeing a pattern of regulatory overreach from the Biden administration. Last year the Court described the CDC’s stretching of the Public Health Service Act to enact its eviction moratorium as “unprecedented” and “a wafer-thin reed on which to rest such sweeping power.”

So this was a mixed day for vaccine mandates at the Court. One point worth adding: Critics outraged over the Court’s emergency docket procedure earlier this fall have little to complain about in that regard, as these cases were given full briefing and oral argument. Since these cases dealt only with the likelihood of success on the merits and not final dispositions, we can only hope the CMS case would ultimately come out the other way if it returns to the Court. Otherwise, as Justice Alito warned, rewarding such departures from administrative procedure “may have a lasting effect on Executive Branch behavior.”

‘Unwoke’ With Kevin and Kruiser #48: We’re Back and We’re Spectacular!
Joe Biden Declares “The Pandemic Is Over” (VIDEO)
Iranian Regime Sniper Filmed Firing on Women’s Rights Protesters in Shahr-e-Ray (VIDEO) #MahsaAmini
Colbert Wonders ‘How Big of an A-Hole Is Ron DeSantis?’
Ocasio-Cortez faces fierce backlash after comparing Iranian anti-hijab protest to pro-abortion efforts in the US