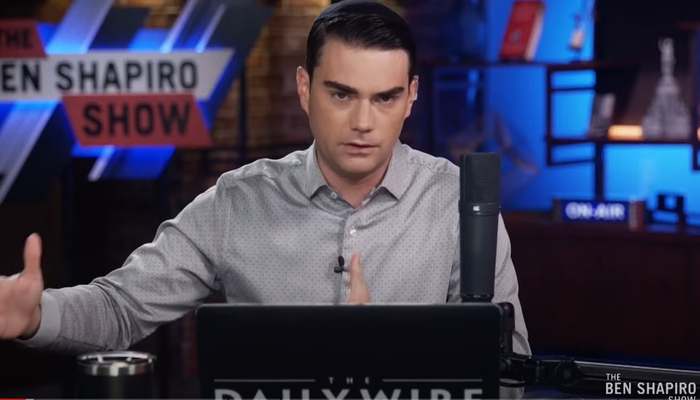 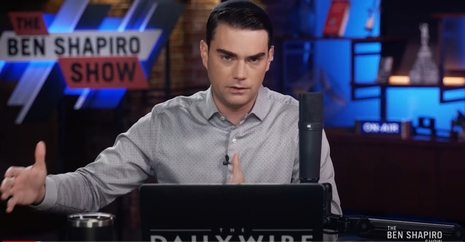 There is out there in the media world and today’s mania for podcasts something called The Podcast Movement, which identifies itself as “The World’s Largest Community of Podcasters.”

As this is written, the Podcasters are having a conference of thousands of their podcast brethren in Dallas, Texas. Then — are you buckled in — a devastating event occurred.

Conservative Ben Shapiro, he of The Daily Wire and his own podcast had the audacity – the audacity! – to show up in person at the conference. Cue the smelling salts. This tweet was issued – and no, this is not satire from The Babylon Bee but the real thing. 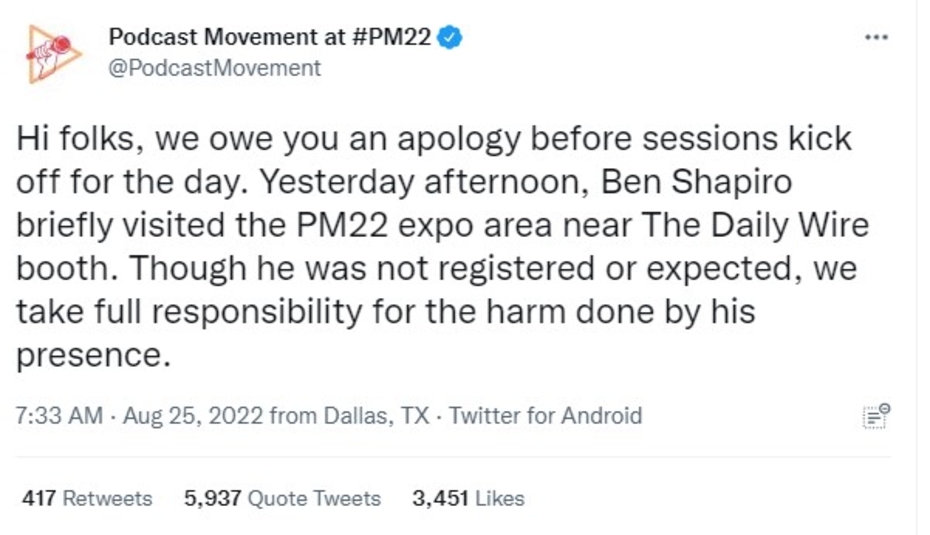 This was followed up with a second tweet that read, no kidding, this way: 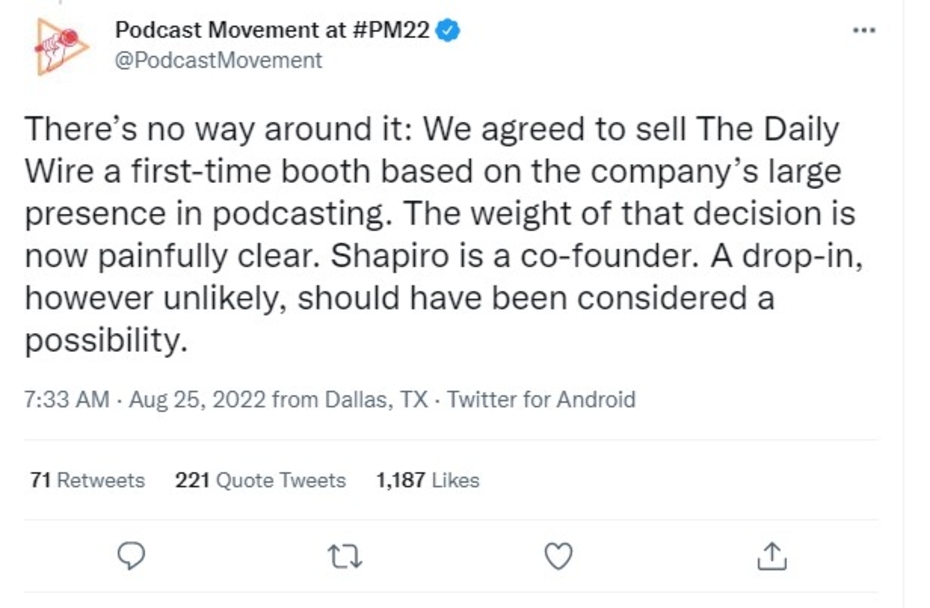 The ridicule of this insanity was immediate. 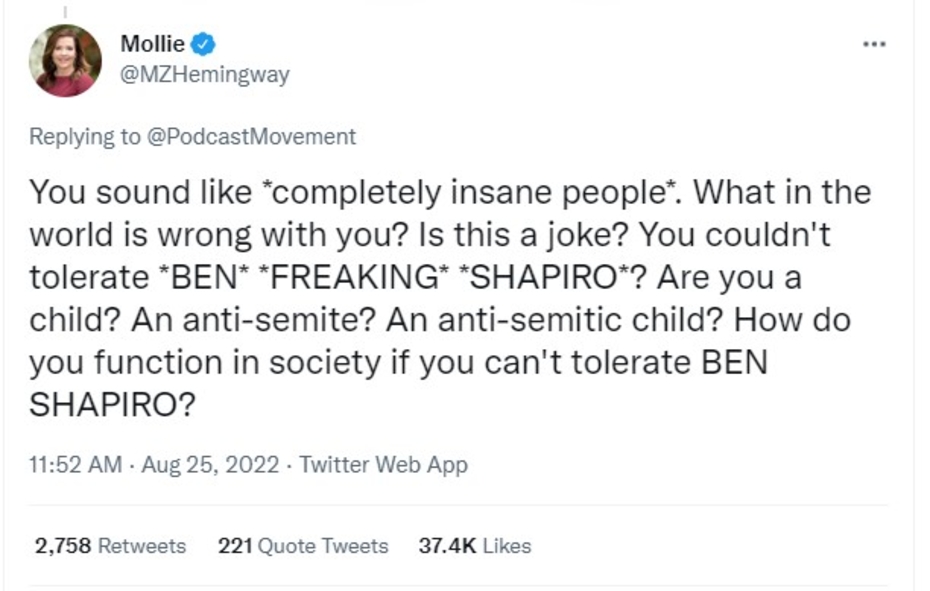 And then there was this from the notorious Ben Shapiro himself, tongue firmly planted in cheek: 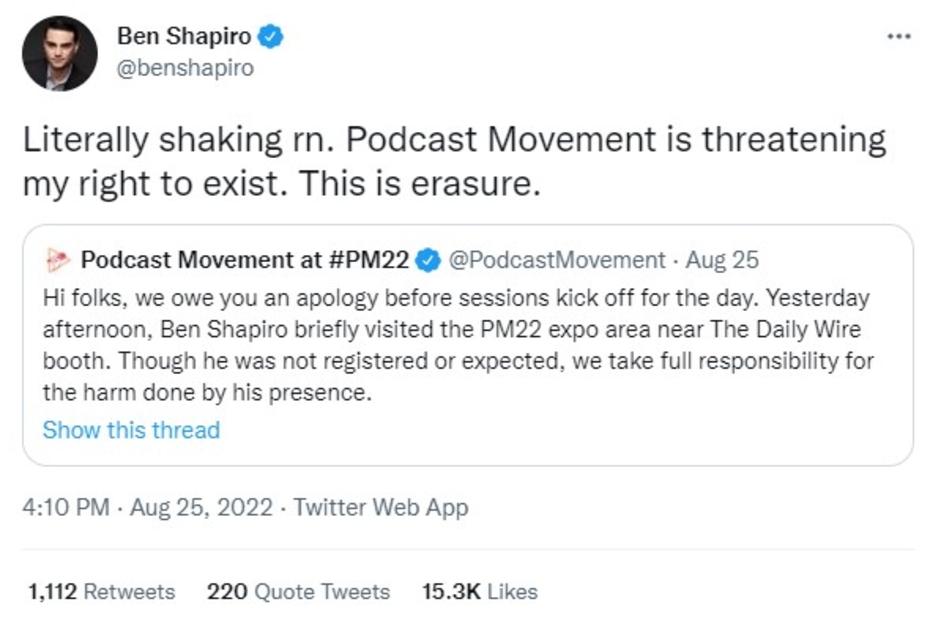 Now let’s move on to media story number two, as discussed by Catherine Salgado here on NewsBusters. She wrote:

Zuckerberg went on Rogan’s podcast Aug. 25, and Rogan asked him about how Facebook deals with supposed “misinformation,” specifically highlighting the Hunter Biden laptop scandal. Big Tech censored the Biden scandal just before the 2020 election, an action which the Media Research Center revealed helped Big Media and Big Tech steal the 2020 election for President Joe Biden. Zuckerberg readily admitted that the Federal Bureau of Investigation (FBI) had pressured his platform to censor content.

Here is the headline from Fox News:

FBI blasted after Zuckerberg revealed their warning ahead of the Hunter Biden laptop story: ‘Collusion’

Twitter erupted after Mark Zuckerberg revealed that Facebook censored references to the Hunter Biden laptop after being tipped off by the FBI.

The Fox story says this:

Speaking on an episode of The Joe Rogan Experience, Zuckerberg explained, “The FBI, I think, basically came to us – some folks on our team – and was like, ‘Hey, just so you know, like, you should be on high alert…  We thought that there was a lot of Russian propaganda in the 2016 election. We have it on notice that, basically, there’s about to be some kind of dump of that’s similar to that. So just be vigilant.’”

Zuckerberg acknowledged that ‘the distribution on Facebook was decreased’ of the New York Post’s story about Hunter Biden’s laptop, noting, ‘fewer people saw it than would’ve otherwise.’”

So, between these two media stories, what do we have here?

Got that? A podcast is a “program (as of music or talk).” Which is to say, one listens to a podcast to get information or entertainment on whatever.

And, it is now crystal clear, the Podcast Movement is embarrassed that Ben Shapiro, he the founder of the Daily Wire, which the Podcast Movement itself identifies as having a “large presence in podcasting” had the chops to show up….. in person! Ohhhh the humanity! He should have been barred the moment he showed his face, and the Daily Wire, large podcasting presence or not, denied participation in the conference.

Meanwhile, Meta CEO Mark Zuckerberg admits to podcaster Joe Rogan that, in fact, the FBI presented itself to Facebook employees in 2020 to warn them off the Hunter Biden laptop story because, you know, it could be Russian disinformation. Right.

At the heart of both these stories is the very same problem. Censorship. A drive by left-wing elites, in this case left-wing elites in the Podcast Movement and the FBI and Facebook, to shut down the free flow of information that said elites disagree with. It could be targeting Ben Shapiro on the one hand, or using the FBI and Facebook on the other hand. But in each case it is exactly the same problem.

And that problem is a serious one in a country whose life blood involves free speech and a media that uses that free speech to inform and educate Americans.

To update the old 1960s astronaut lingo, “America, we have a problem.”

And a big one.