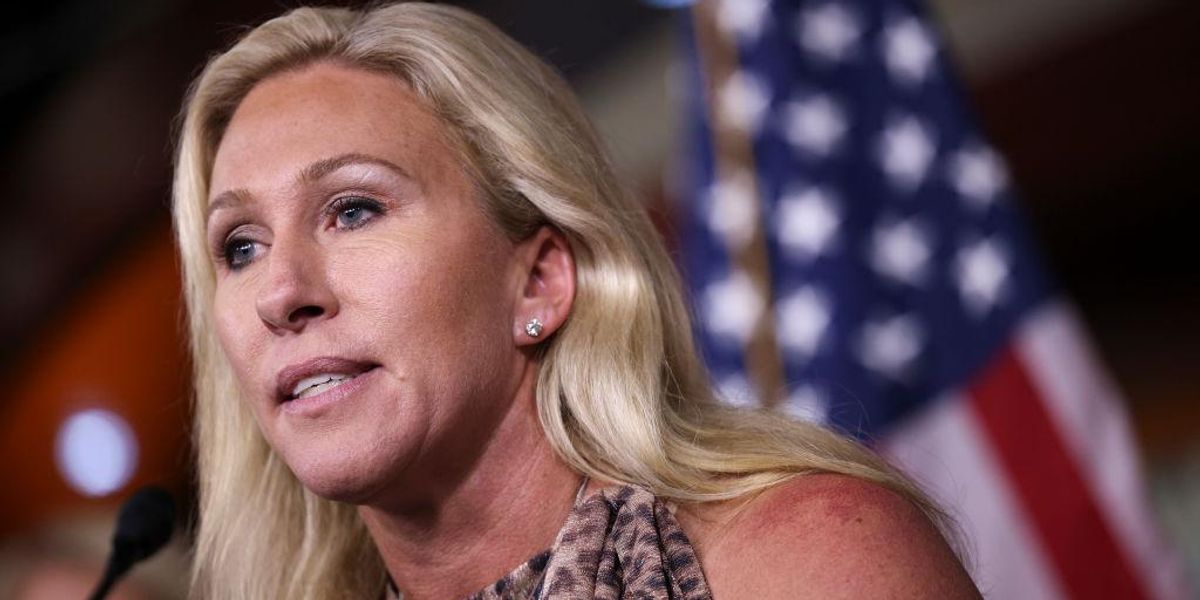 Rep. Marjorie Taylor Greene (R-Ga.) recently released security camera video of her home being swatted. The Republican representative from Georgia vehemently spoke out against the swatting – saying that those behind the fraudulent 911 call wanted her “to be murdered.”

During an interview with Right Side Broadcasting Network (RBSN), Greene shared “never before seen security camera footage” of the potentially deadly swatting incident at her home in Rome, Georgia.

Someone called 911 to report an alleged shooting at Greene’s home early Wednesday morning. The caller alleged that a man had been shot five times in the chest and was lying in a bathtub. The shooter was allegedly a woman with a loaded gun who was suicidal. The 911 caller claimed that there were children in the house.

Greene said police officers were looking for “a female with a gun that is threatening to kill herself.”

“They were responding to a very serious issue that they knew someone supposedly had been shot – probably dead, maybe not dead yet,” Greene said of the police officers who responded. “They knew someone was suicidal, had a loaded gun in their hand. And there were children in the home.”

Video shows the cops inspecting the outside of the home.

“I came down the hallway, and I came out of my hallway, and I looked around to look at the front door, and I saw police out there,” Greene explained. “And I was like, ‘Oh gosh, there’s something serious going on.'”

“It really upset me because usually, I mean, if the police are coming to your house in the middle of the night, there’s a serious thing,” she added.

Greene instantly thought that maybe something tragic had happened to her children – who are away at college.

She said that the officer’s demeanor and body language was “tactical” as he asked her, “Is everything okay, ma’am?” She told them that she had been asleep and didn’t understand why law enforcement officers were at her door in the middle of the night.

The officer told Greene, “I think you’ve been swatted.”

Greene – who is a staunch Second Amendment supporter – thanked God that she didn’t bring her gun with her to greet police at the door, or it could have been a far more dangerous encounter.

“I probably would have been the target and that is the whole purpose of swatting someone,” she stated.

Greene invited police – who still had their guns drawn – into her home to do a search.

Greene said the officers from the Rome Police Department are “amazing,” and handled the intense situation by being calm and level-headed.

“This is what gets people killed. There have been multiple incidences just like this one where police ended up shooting someone because they believed they were responding to a call,” she pointed out. “And that’s what was happening to me.”

“They wanted me to be murdered,” Greene emphasized. “Death by cop – that’s what swatting is, and they were doing this in hopes that the police would kill me.”

Greene said she was swatted two nights in a row. The second time, police were familiar that the call could be a swatting hoax.

Greene claimed that the person behind the swatting call allegedly confessed to authorities that they did so in reaction to the representative’s Protect Children’s Innocence Act.

Last week, Greene introduced a bill against so-called “gender-affirming care” for children – which would make puberty blockers and gender-changing surgery for minors a felony.

Greene last week introduced a bill that would make it a felony to provide gender-affirming care for transgender minors.

Greene claimed that liberals are furious at her for introducing the bill, “They’re so angry at me that they want to kill me for it.”

u201cMarjorie Taylor Greene @RepMTG tells @JackPosobiec about being swatted again:nn”I am against transgender surgeries for children. I have taken a very strong stance against it, and they are angry at me for that. They wanted to have me murdered by police.”u201d